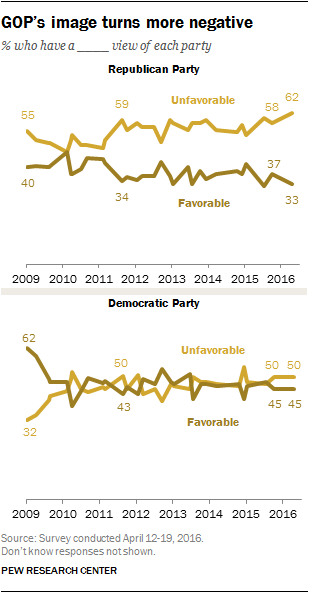 The Republican Party’s image, already quite negative, has slipped since last fall. Currently 33% of the public has a favorable impression of the Republican Party, while 62% have an unfavorable view. Unfavorable opinions of the GOP are now as high as at any point since 1992.

In October, 37% viewed the Republican Party favorably and 58% viewed it unfavorably. The decline in favorability since then has largely come among Republicans themselves: In the current survey, 68% of Republicans view their party positively, down from 79% last fall. 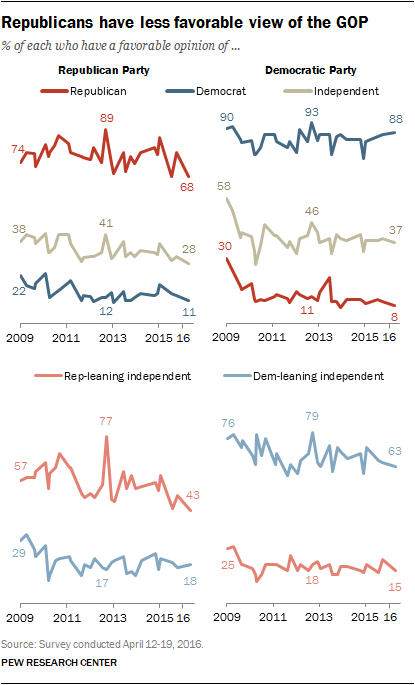 The latest national survey by the Pew Research Center, conducted April 12-19 among 2,008 adults, finds that Democrats have a far more favorable impression of their party than Republicans have of theirs. Nearly nine-in-ten Democrats (88%) view their party favorably, which is 20 points higher than Republicans’ ratings of the GOP (68%). 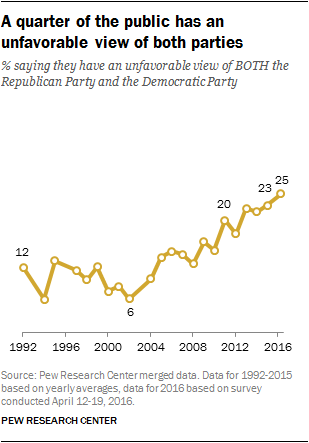 Democratic-leaning independents, like those who identify as Democrats, have much more positive impressions of the Democratic Party. About six-in-ten (63%) view the party favorably, compared with 32% who have an unfavorable view.

Overall, a quarter of the public now expresses unfavorable opinions of both political parties. This is driven in part by the growing share of Republicans and Republican leaners who view the GOP negatively, and by the overwhelming shares in both parties who view the opposing party unfavorably.

The share holding negative views of both parties is higher today than in previous presidential election years. In 2012, 18% viewed both parties unfavorably and in 2000, just 7% had unfavorable opinions of both the Republican and Democratic parties. 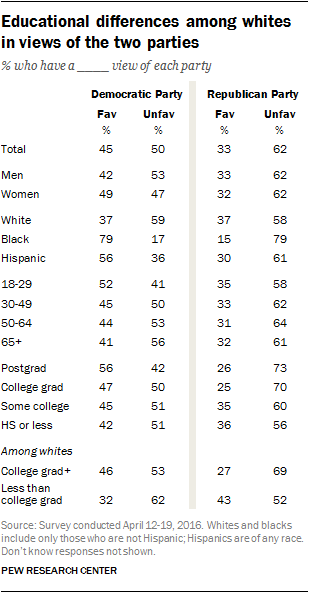 By contrast, identical shares of whites view both parties favorably (37% each). Among whites, there are sizable educational differences in opinions of the parties. More white college graduates have a favorable impression of the Democratic Party (46%) than the Republican Party (27%). Among whites with less education, 43% view the GOP favorably, while just 32% have a positive view of the Democratic Party.

Liberals make up the largest share of Democratic voters, but their growth has slowed in recent years