Muslim Americans appear to be highly assimilated into American society and they are largely content with their lives. More than six-in-ten do not see a conflict between being a devout Muslim and living in a modern society, and a similar number say that most Muslims coming to the U.S. today want to adopt an American way of life rather than remain distinctive from the larger society.

By overwhelming margins, Muslim Americans are satisfied with the way things are going in their own lives and rate their local communities as good places to live. And Muslim Americans are far more likely than the general public to express satisfaction with national conditions. 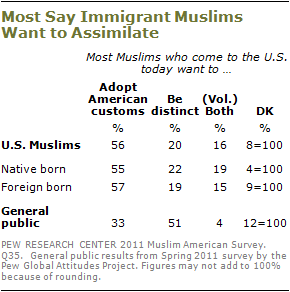 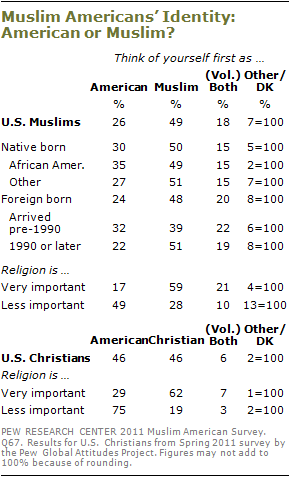 Among both Muslims and Christians, people who say religion is very important in their lives are far more likely to view themselves primarily as a member of their religion.

Among Muslims who say that religion is very important in their lives, 59% say they think of themselves first as Muslims. Among those for whom religion is less important, only 28% 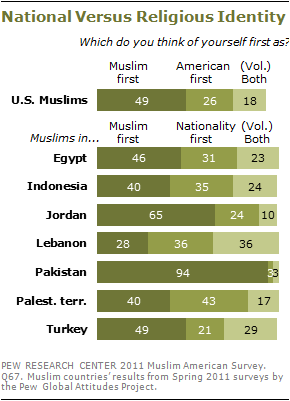 identify first as Muslim. Similarly, among Christians who place great personal importance on religion, 62% say they are Christians first, compared with 19% among those who view religion as less important.

Pew Global Attitudes Project surveys conducted this year found substantial differences in views of national identity across Muslim publics. Nearly all Pakistanis (94%) consider themselves first as Muslims rather than as Pakistanis. By contrast, just 28% of Muslims in Lebanon say they consider themselves Muslim first – far fewer than the number of U.S. Muslims expressing this view (49%). 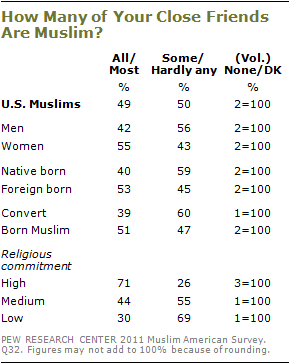 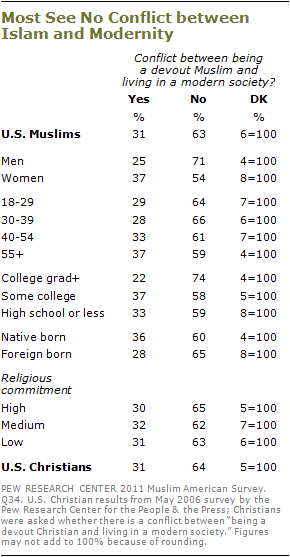 More women than men have a close circle of friends consisting mostly or entirely of other Muslims. And Muslim Americans who are highly committed to their religion are much more likely than those with medium or low commitment to say that all or most of their close friends are Muslims.

Muslims of all ages express similar views on this question. Similarly, there are only small differences between native-born Muslims and immigrants, as well as between those who are personally religiously observant and those who are less religious.

Most U.S. Muslims Happy with Lives, Direction of Country 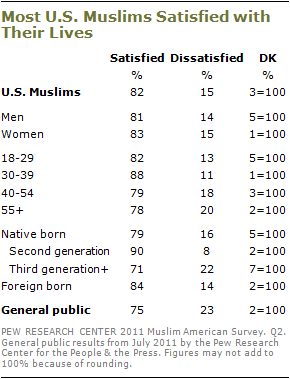 More than eight-in-ten Muslim Americans (82%) say they are satisfied with the way things are going in their lives, while only 15% are dissatisfied. By this measure, Muslims express slightly higher levels of satisfaction with their lives than does the U.S. public overall (75% satisfied, 23% dissatisfied).

The survey finds high levels of life satisfaction across a wide variety of demographic groups. Among both men and women, for example, roughly eight-in-ten express satisfaction with the way things are going in their lives. And this sentiment is expressed by roughly comparable numbers of native-born (79%) and foreign-born Muslims (84%).

Among native-born Muslims, second-generation Americans (those whose parents were born outside the U.S.) express higher levels of satisfaction with their lives (90%) than third-generation respondents (71%). 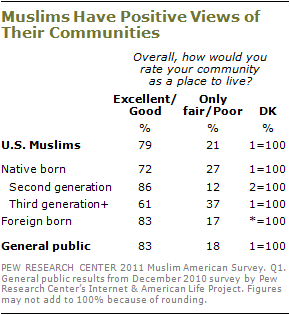 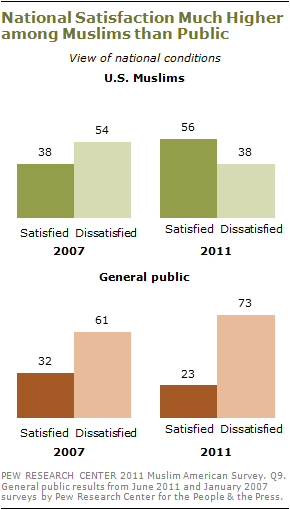 While Muslims have become more content with the country’s direction over the past four years, the public as a whole has moved in the opposite direction; about a third of American adults (32%) were satisfied with the way things were going in the U.S. in 2007, compared with 23% expressing satisfaction earlier this summer. 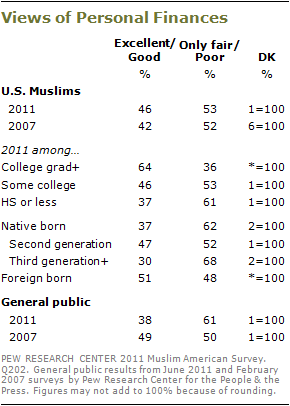 Not surprisingly, Muslims who have graduated from college are more satisfied with their financial condition (64% in excellent or good shape) compared with those who have some college education (46% excellent/good) and those who have a high school degree or less education (37% excellent/good). Immigrants are more satisfied with their financial situation than are native-born Muslims. 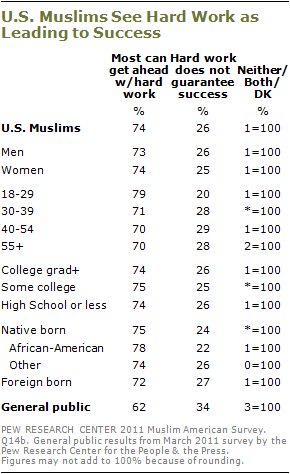 Nearly three-quarters of U.S. Muslims (74%) continue to express faith in the American dream, saying that most people who want to get ahead can make it if they are willing to work hard. One-in-four Muslims (26%) take the opposite point of view, that hard work and determination are no guarantee of success for most people. Muslims endorse the view that hard work will lead to success at higher rates than the American public overall, among whom 62% say most people can get ahead if they are willing to work hard.

The belief that hard work pays off is broadly held among U.S. Muslims. Similarly large numbers of men and women, young people and older people, and immigrant and native born express this belief. 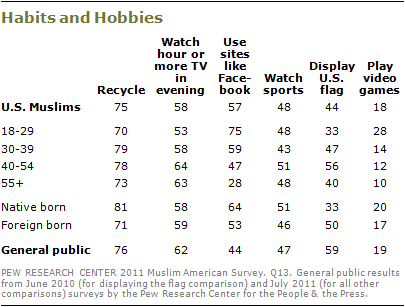 Muslims participate in a variety of social and recreational activities at rates very similar to those seen among the U.S. population as a whole. Roughly six-in-ten Muslims (58%) regularly watch an hour or more of entertainment television programming in the evening, similar to the share of U.S. adults (62%) who say they same. About half of both U.S. Muslims (48%) and Americans overall (47%) regularly watch professional or college sports. And about one-in-five Muslims (18%) regularly play video games, with a nearly identical share of the general population (19%) saying the same.

Muslims report using online social networking sites such as Facebook or Twitter at rates higher than those seen among the general public. This is partly due to the high rate of use among younger Muslims (75% among those under 30) and because the Muslim population is younger than the U.S. population as a whole (36% of Muslims are under age 30, compared with 22% among the general population). Displaying the American flag at home, at the office or on the car is less common among Muslims (44%) than among the population as a whole (59%). Half of Muslim immigrants say they display the flag, compared with 33% of native-born Muslims overall and 35% of native-born African American Muslims.

The percentage of Muslims who say they recycle paper, plastic or glass from home (75%) is nearly identical to the share of the total U.S. adult population that says the same (76%).