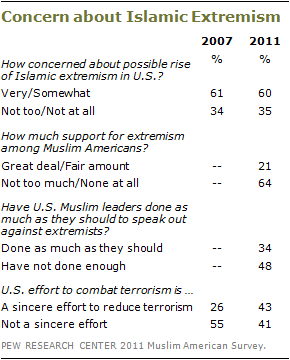 As the 10th anniversary of the 9/11 attacks approaches, a comprehensive public opinion survey finds no indication of increased alienation or anger among Muslim Americans in response to concerns about home-grown Islamic terrorists, controversies about the building of mosques and other pressures that have been brought to bear on this high-profile minority group in recent years. There also is no evidence of rising support for Islamic extremism among Muslim Americans.

Highlights From the Report:
Slideshow | Infographic

Interactive Map:
Controversies Over Mosques and Islamic Centers Across the U.S.

On the contrary, as found in the Pew Research Center’s 2007 survey, Muslims in the United States continue to reject extremism by much larger margins than most Muslim publics surveyed this year by the Pew Global Attitudes Project. And majorities of Muslim Americans express concern about the possible rise of Islamic extremism, both here and abroad.

Many Muslims fault their own leaders for failing to challenge Islamic extremists. Nearly half (48%) say that Muslim leaders in the United States have not done enough to speak out against Islamic extremists; only about a third (34%) say Muslim leaders have done enough in challenging extremists. At the same time, 68% say that Muslim Americans themselves are cooperating as much as they should with law enforcement.
The survey of 1,033 Muslim Americans, conducted April 14-July 22 by the Pew Research Center for the People & the Press and the Pew Forum on Religion & Public Life, finds that far more view the United States’ efforts to combat terrorism as sincere than did so in 2007. Currently, opinion is divided – 43% of Muslim Americans say U.S. efforts are a sincere attempt to reduce terrorism while 41% do not. Four years ago, during George Bush’s presidency, more than twice as many viewed U.S. anti-terrorism efforts as insincere rather than sincere (55% to 26%). 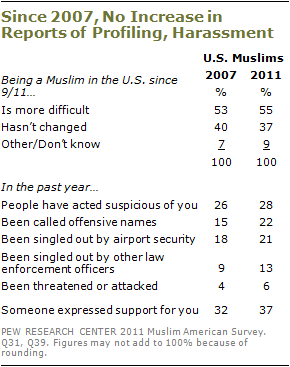 For Muslims in the United States, concerns about Islamic extremism coexist with the view that life for Muslim Americans in post-9/11 America is difficult in a number of ways. Significant numbers report being looked at with suspicion (28%), and being called offensive names (22%). And while 21% report being singled out by airport security, 13% say they have been singled out by other law enforcement. Overall, a 52% majority says that government anti-terrorism policies single out Muslims in the U.S. for increased surveillance and monitoring.

However, reports about such experiences and feelings of being subject to intense scrutiny have not changed substantially since 2007. Overall about the same percentage today as in 2007 say that life for Muslims in the U.S. has become more difficult since 9/11 (55% now, 53% in 2007). The percentage reporting they are bothered by their sense that Muslim Americans are being singled out for increased government surveillance also is no greater now than four years ago (38% bothered a lot or some today vs. 39% in 2007).

The controversies over the building of mosques in New York City and other parts of the country are resonating in the Muslim American community. Most Muslim Americans (81%) have heard about the proposal to build a mosque and Islamic center near the site of the World Trade Center and a clear majority of those who are aware of the planned mosque (72%) say it should be allowed. However, 35% say either that the project should not be allowed (20%), or that it should be permitted but is a bad idea (15%).
A quarter of Muslim Americans (25%) report that mosques or Islamic centers in their communities have been the target of controversy or outright hostility. While 14% report that there has been opposition to the building of a mosque or Islamic center in their community in the past few years, 15% say that a mosque or Islamic center in their community has been the target of vandalism or other hostile acts in the past 12 months.

Nonetheless, Muslim Americans have not become disillusioned with the country. They are overwhelmingly satisfied with the way things are going in their lives (82%) and continue to rate their communities very positively as places to live (79% excellent or good). 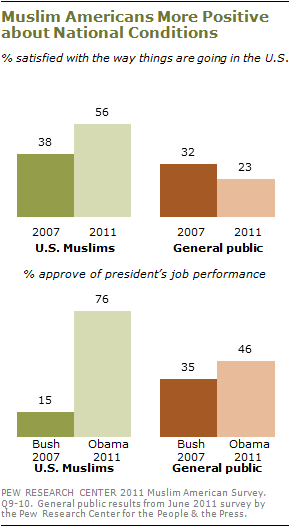 At a personal level, most think that ordinary Americans are friendly (48%) or neutral (32%) toward Muslim Americans; relatively few (16%) believe the general public is unfriendly toward Muslim Americans. About two-thirds (66%) say that the quality of life for Muslims in the U.S. is better than in most Muslim countries.

The current disparity may well reflect the fact that Muslim Americans are much more satisfied with the current political situation in the country than they were four years ago. Most Muslim Americans continue to identify with or lean toward the Democratic Party and they overwhelmingly support Barack Obama. Fully 76% approve of Obama’s job performance; in 2007, about as many (69%) disapproved of George Bush’s job performance. 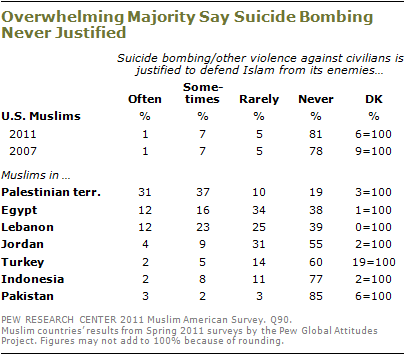 In the other Muslim publics surveyed, the median percentage saying that suicide bombing and other violence against civilians are never justified is 55%; by contrast, 81% of Muslims in the U.S. say such violence is never justified. Similarly, the median percentage across the seven Muslim publics with very unfavorable views of al Qaeda is 38%, compared with 70% among Muslim Americans. (For more, see “U.S. Image in Pakistan Falls No Further Following bin Laden Killing,” June 21, 2011; “Muslim-Western Tensions Persist,” July 21, 2011.) 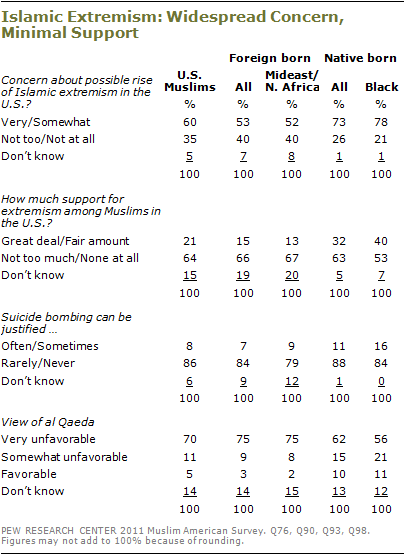 Opposition to violence is broadly shared by all segments of the Muslim American population, and there is no correlation between support for suicide bombing and measures of religiosity such as strong religious beliefs or mosque attendance. Yet opposition to extremism is more pronounced among some segments of the U.S. Muslim public than others.

Perhaps relatedly, 40% of native-born African American Muslims believe that there is at least a fair amount of support for extremism among U.S. Muslims, compared with just 15% among foreign born Muslim Americans.

When it comes to many other aspects of American life, Muslim Americans look similar to the rest of the public. Comparable percentages say they watch entertainment television, follow professional or college sports, recycle household materials, and play video games. About one-in-three (33%) say they have worked with other people from their neighborhood to fix a problem or improve a condition in their community in the past 12 months, compared with 38% of the general public.

hen asked to choose, nearly half of Muslims in the U.S. (49%) say they think of themselves first as a Muslim, while 26% see themselves first as an American; 18% volunteer that they are both. In a 2011 survey by the Pew Global Attitudes Project, 46% of Christians in the U.S. say they identify as Christian first while the same number identify as American first. White evangelicals are much more likely to identify first as Christian (70%).

The survey also finds that compared with Muslims elsewhere, Muslim Americans are more supportive of the role of women in society. Virtually all Muslim Americans (90%) agree that women should be able to work outside of the home. Most (68%) also think that there is no difference between men and women political leaders. These are not the prevailing views of Muslims in most predominantly Muslim countries surveyed by the Pew Global Attitudes Project.

Who Are Muslim Americans?

First-generation Muslim Americans come from a wide range of countries around the world. About four-in-ten (41%) are immigrants from the Middle East or North Africa, while about a quarter (26%) come from South Asian nations including Pakistan (14%), Bangladesh (5%) and India (3%). Others came to the U.S. from sub-Saharan Africa (11%), various countries in Europe (7%), Iran (5%), or other countries (9%). 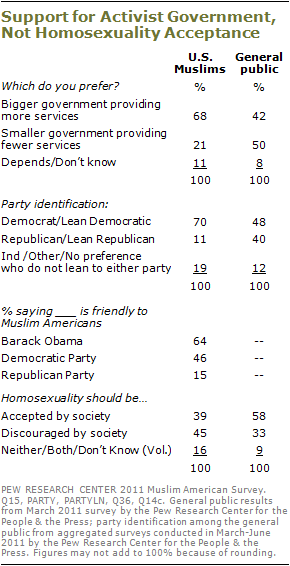 Religious, But Not Dogmatic 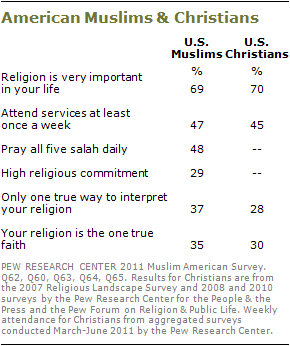 Many Muslim Americans are highly religious: 69% say that religion is very important in their lives, and about half (47%) report at least weekly attendance at a mosque for prayer. Similarly, about half (48%) say they make all five salah prayers daily, and another 18% report making at least some salah daily.

By these measures, Muslims in the U.S. are about as religious as Christians in the United States: 70% of Christians say that religion is very important in their lives and 45% attend services at least weekly according to recent surveys by the Pew Research Center for the People & the Press.

In this respect, Muslim Americans differ from many of their counterparts in the Muslim world and are similar to U.S. Christians. In the Pew Forum on Religion & Public Life’s 2007 U.S. Religious Landscape Survey, 28% of Christians said that there was only one way to interpret the teachings of their religion.

About the Muslim American Survey

The 2011 Muslim American Survey is based on telephone interviews conducted April 14-July 22, 2011 with 1,033 Muslims in the U.S. Interviews were conducted in English, Arabic, Farsi and Urdu.

The survey was conducted by landline telephones and cell phones, using a nationally representative random sample combining interviews from three sampling sources. (1) About a third (35%) of the interviews (358) were obtained from a geographically stratified random-digit-dial (RDD) sample of the general public, which entailed screening 41,689 households. (2) An additional 501 came from a commercial database of 113 million households, of which more than 600,000 included people with likely Muslim first names or surnames who also had a telephone number; Muslim households from this database were excluded from the geographically-stratified RDD sample but were included in a separate stratum as part of the general public RDD sample. (3) An additional 174 interviews were obtained by recontacting English-speaking Muslim households on landlines and cell phones from previous nationwide surveys conducted since 2007.

The results of all three sampling sources were combined and statistically adjusted to the demographic parameters of the Muslim population, as estimated by the results of the interviews from the geographically-stratified RDD and listed sample (excluding the recontact interviews). The margin of sampling error for results based on the full sample is plus or minus 5 percentage points. Details about the study’s sample design and the overall methodological approach are contained in the survey methodology. The study’s design was nearly identical to that used in the 2007 survey of Muslim Americans.

Next: Section 1: A Demographic Portrait of Muslim Americans
← Prev Page
You are reading page1Page2Page3Page4Page5Page6Page7Page8
Next Page →