Nearly 10 years after the 9/11 terrorist attacks, a majority of Muslim Americans (55%) say that it has become more difficult to be a Muslim in the United States, and a sizable minority report having experienced specific instances of mistreatment or discrimination in the past year. A majority also says that Muslims generally are singled out by the U.S. government’s terrorism policies. However, reports about these experiences have not increased substantially since 2007 and the number saying it has become more difficult to be Muslim in the U.S. is not significantly larger than it was four years ago.

When asked to name the biggest problems facing Muslims in the United States, most cite negative views about Muslims, discrimination and prejudice, or public misconceptions about Islam. Nonetheless, only 16% of Muslim Americans say that the American people are generally unfriendly toward Muslims, while a large majority (66%) views life for Muslims as better in the U.S. than in most Muslim countries.

Life for Muslims in the United States 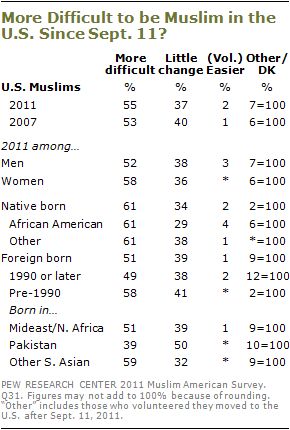 About six-in-ten native-born Muslims (61%) say that it has become more difficult to be a Muslim in this country, compared with 51% of foreign-born Muslim Americans. Among foreign-born Muslims, there are no significant differences by year arrived to the U.S. or country of origin.

More college graduates say that life has become more difficult for Muslims since the Sept. 11 attacks than those with a high school education or less (62% vs. 51%). But there are no significant differences in opinion among Muslim Americans by gender, age or religious commitment. 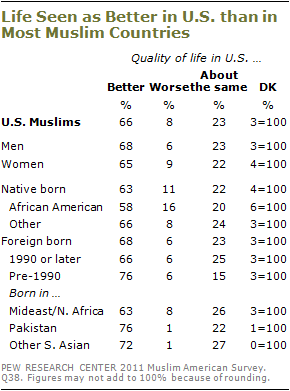 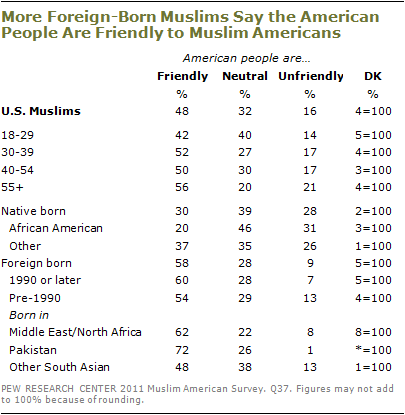 By a 48% to 16% margin more Muslim Americans say that the American people are friendly toward them rather than unfriendly; 32% say that Americans are neutral toward Muslim Americans. Native-born and foreign-born Muslims differ on this question.

A majority of foreign-born Muslims (58%) say that the American people are friendly to them, including large majorities of those born in Pakistan, the Middle East and North Africa.

By comparison, only 30% of Muslims born in the U.S. say the American people are friendly toward Muslim Americans while nearly as many (28%) say they are unfriendly. African American Muslims born in the U.S. are less likely than other native-born Muslims to say that the American people are friendly to Muslim Americans (20% among African Americans vs. 37% among other native-born Muslims).

Older Muslims are somewhat more likely than younger Muslims to think that the American people are friendly – 56% of those 55 and older say this compared with 42% of those younger than 30. There are no significant differences in opinion by gender or education. 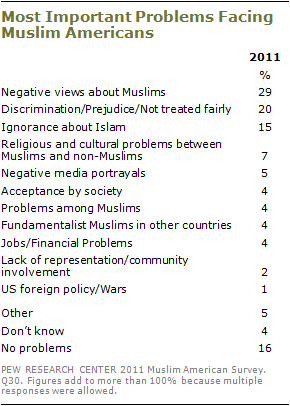 Negative views about Muslims, discrimination and ignorance about Islam top the list of the problems Muslim Americans say they face. The most frequently mentioned problem is people’s negative views about Muslims (29%), including stereotyping, being viewed as terrorists and distrust. One-in-five (20%) cite discrimination, prejudice and unfair treatment as the biggest problem facing Muslims in this country. Another 15% mention ignorance or misconceptions about Islam.

Far fewer cite religious or cultural problems between Muslims and non-Muslims (7%) and negative media portrayals (5%). Only 4% of Muslim Americans mention jobs or financial problems, issues that have dominated the public’s list of most important problems for the past several years. Just 4% say that clashes or disputes within the Muslim community are among the most important problems. 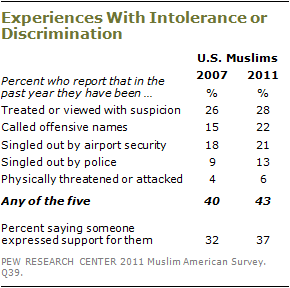 About one-in-six (16%) Muslim Americans say there are no problems facing Muslims living in the United States today.

Another 13% of Muslim Americans say they have been singled out by other law enforcement officials and 6% say they have been physically threatened or attacked. Overall, 43% of Muslim Americans report experiencing at least one of these kinds of acts in the past 12 months. However, reports about these types of experiences have not increased substantially since 2007 (40% said they had experienced at least one of these acts then). Further, nearly as many (37%) say that someone has expressed support for them in the past year because they are Muslim.

As was the case in 2007, younger Muslims are far more likely to say they have been victims of discrimination or intolerance based on their religion. More than half (56%) of Muslims under the age of 30 say they have been treated with suspicion, called offensive names, singled out by law enforcement of some kind or have been physically threatened in the past year. That compares with 35% of Muslim Americans age 30 and older. 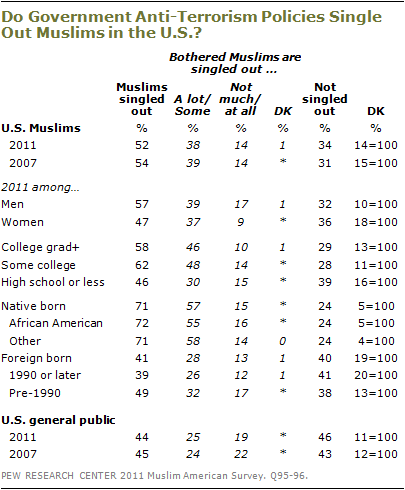 The general public is more divided on this question – as many say that Muslim Americans are not singled out by the government’s anti-terrorism measures (46%) as say that they are (44%). Just a quarter of the public (25%) say they are bothered that Muslims are singled out.

Among Muslim Americans, more men than women say that Muslims are singled out by the government’s anti-terrorism policies (57% vs. 47%), but there is no difference in the number saying that they are bothered by being singled out. 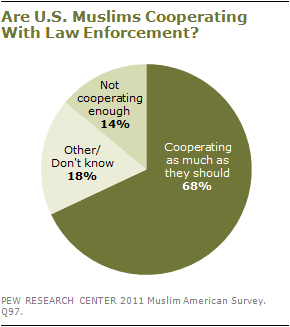 More men than women say this (75% vs. 62%). In addition, religiously observant Muslims are more likely than those who are less religious to say that Muslim Americans are cooperating with law enforcement as much as they should (75% vs. 66%).

Controversy about Mosques and Islamic Centers 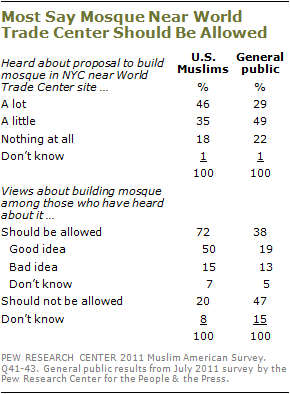 An overwhelming majority of Muslim Americans (81%) have heard a lot or a little about the proposal to build an Islamic cultural center and mosque near the site of the World Trade Center in New York City. There also is a great deal of support for the mosque among Muslims in the U.S. – 72% of those who have heard about the planned mosque say it should be allowed to be built.

However, some Muslim Americans have doubts about the project. One-fifth say it should not be allowed (20%) and an additional 15% say it should be allowed but personally feel building the mosque and cultural center near the World Trade Center site is a bad idea.

The general public differs sharply from Muslim Americans on this issue. A similar percentage has heard about the proposal (78%), but only 38% of the public says it should be allowed while a 47% plurality says it should not be allowed.

Media Coverage of Islam and Muslims 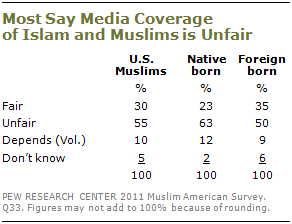 Muslims born in the U.S. are more likely than those born outside the U.S. to say that media coverage of Muslims is unfair. Nearly two-thirds of native-born Muslims (63%) say this, compared with 50% of foreign-born Muslims.