Most Muslim Americans continue to reject violence and extremism. As in 2007, very few see suicide bombing and other forms of violence against civilians as ever justified in the defense of Islam, and al Qaeda is even less popular than it was then. At the same time, there is extensive concern among Muslim Americans about Islamic extremism, both around the world and in the United States.

On foreign policy, Muslim Americans are critical of the U.S. war in Afghanistan, though no more so than in 2007. Muslim Americans take a cautious view of the “Arab spring” – as many say they support stable governments in the region, even if that means less democracy, as say they support democracy, even if that means less stability. 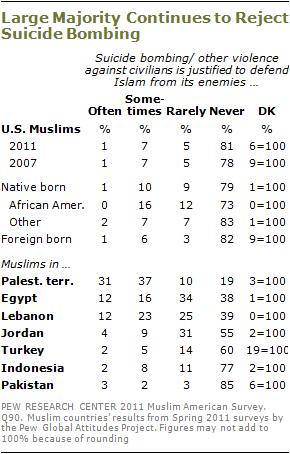 About eight-in-ten American Muslims (81%) say that suicide bombing and other forms of violence against civilians are never justified in order to defend Islam from its enemies. Just 8% say these tactics are often or sometimes justified. There has been virtually no change in these opinions since 2007.

U.S. Muslims are far more likely than Muslims in most of the predominantly Muslim countries surveyed by the Pew Global Attitudes Project to say that suicide bombing in the defense of Islam is never justified. Among the seven Muslim publics surveyed, only in Pakistan (85% never justified) and Indonesia (77%) do comparably large numbers reject suicide bombing and other violence against civilians. 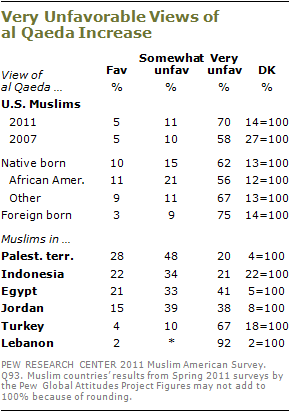 Majorities of both the general public and Muslim Americans express concerns about Islamic extremism. Among Muslim Americans, 60% say they are either very (31%) or somewhat (29%) concerned about the possible rise of extremism in the U.S. Similarly, 67% of the public says they are at least somewhat concerned. There has been no significant change since 2007 in U.S. Muslims’ concerns about the possible rise of Islamic extremism in this country. 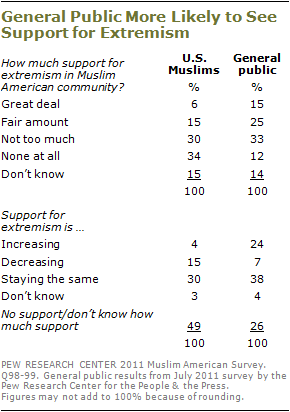 By contrast, 15% of the general public believes that there is a great deal of support for extremism among Muslim Americans, and an additional 25% see a fair amount of support.

The general public’s perception on this question is quite different. Nearly one-quarter (24%) say support for extremism is increasing in the Muslim American community. Just 7% say it is decreasing. 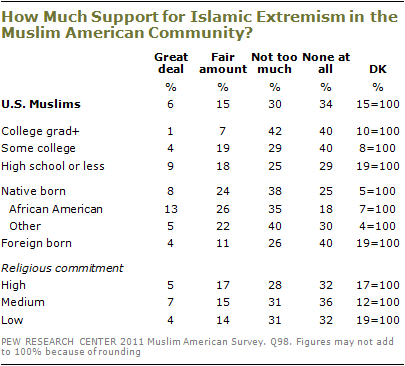 Native-born Muslims, particularly African Americans, are more likely than those not born in the United States to say there is at least a fair amount of support for extremism in the Muslim American community. 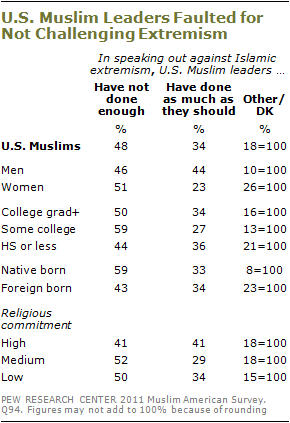 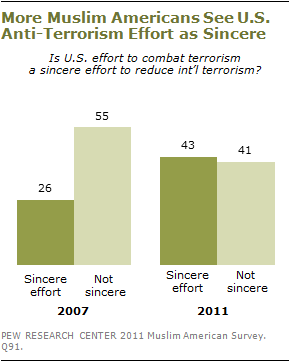 Muslim Americans have a more positive view of the U.S. effort to combat international terrorism than in 2007. Currently, 43% say the U.S. effort to combat terrorism is a sincere effort to reduce international terrorism while about as many (41%) say it is not sincere. Four years ago, during the Bush administration, just 26% viewed the “U.S-led war on terrorism” as sincere while about twice as many (55%) said it was not. The view that the U.S. campaign to combat terrorism is a sincere effort has increased across many subgroups in the U.S. Muslim population.

This measure has not been included on the international surveys of the Pew Global Attitudes Project recently, so a direct comparison between Muslims in the U.S. and those in predominantly Muslim countries is not possible.

Still, it is notable that in most predominantly Muslim countries opposition to U.S.-led efforts to fight terrorism is as widespread today as it was during the Bush administration. One exception is Indonesia, where support for the war on terror increased substantially after Obama became president. (For more, see “China Seen Overtaking U.S. as Global Superpower,” Pew Global Attitudes Project, July 13, 2011.)

There is more support for democracy among college graduates, both among Muslims and in the general public. Among Muslim Americans, 59% 0f college graduates say that democratic governments are more important than stability in the Middle East; that compares with 36% of those with some college education and 40% with no more than a high school education. There are similar differences by education among the public.

Unchanged Views of War in Afghanistan 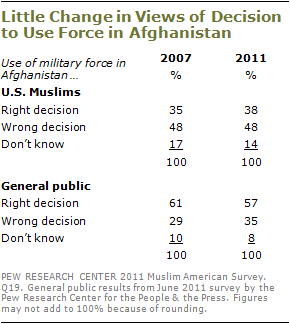 Muslims in the United States remain more opposed than the general public to the decision to use military force in Afghanistan. Currently, 48% say the decision to use force was wrong while 38% say it was right. These views are virtually unchanged from 2007.

Among the general public, 57% view the decision to use force in Afghanistan as right and 35% say it was wrong, according to a June survey by the Pew Research Center for the People & the Press. The public’s views also are little changed from 2007 (61% right decision vs. 29% wrong decision). 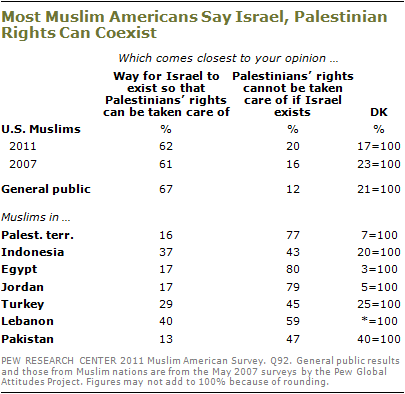 As was the case in 2007, most Muslim Americans do not view Israel’s existence as being incompatible with the rights of the Palestinians: 62% say that a way can be found for Israel to exist so that the rights and needs of the Palestinian people are taken care of. These views are virtually unchanged from 2007.

Muslim Americans’ views on this question closely resemble those of the U.S. general public, among whom 67% say that a way can be found to enable Israel to exist so that Palestinian rights can be taken care of. In contrast, majorities or pluralities in most predominantly Muslim nations surveyed by the Pew Global Attitudes Project in 2007 expressed the view that the rights and needs of the Palestinian people cannot be taken care of as long as the state of Israel exists.