Most Muslim Americans say religion is very important in their lives, two-thirds pray every day (including 48% who pray all five salah daily), and nearly half attend religious services at a mosque at least once a week. U.S. Muslims’ religious beliefs tend to be highly orthodox; for example, 92% believe in the Day of Judgment and 90% believe in angels, both of which are traditional tenets of Islam. However, most Muslim Americans also say that there is more than one true way to interpret the teachings of Islam and that many religions, not just Islam, can lead to eternal salvation.

Islamic Affiliation and Converts to Islam 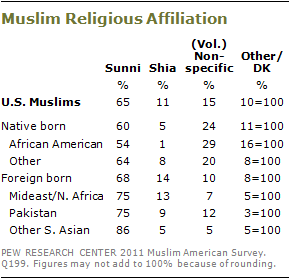 Most Muslims in the United States (65%) identify with Sunni Islam; just 11% identify with the Shia tradition. Roughly one-in-seven Muslims (15%) have no specific affiliation, describing themselves, for example, as “just a Muslim.” 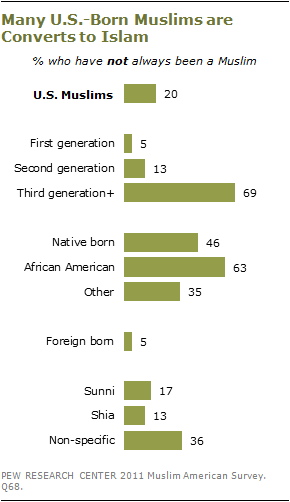 Among American Muslims, 20% are converts to Islam, saying they have not always been Muslim. The Pew Forum’s 2007 Religious Landscape Survey found that among the U.S. general population, an identical percentage (20%) currently belong to a major religious tradition different than the one in which they were raised.2

Among native-born Muslims whose parents also were born in the U.S., fully two-thirds (69%) say they are converts to Islam. And among African American Muslims who were born in the U.S., 63% are converts to the faith. The vast majority of Muslim Americans who are immigrants, or whose parents were immigrants, have always have been Muslim.

Sunni and Shia Muslims have similar numbers of converts within their ranks (17% among Sunnis and 13% among Shia). Among Muslims with no specific affiliation, 36% say they are converts to Islam.

Most See Religion as Very Important 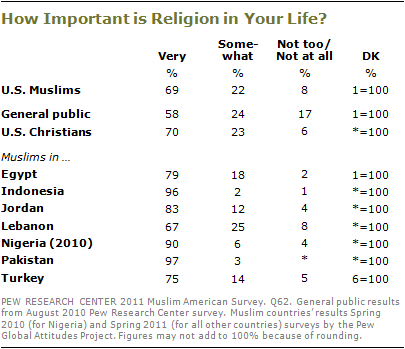 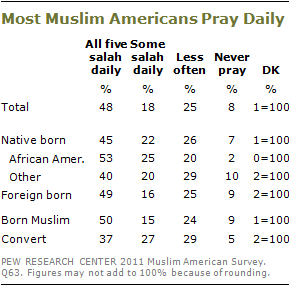 Respondents who have always been Muslim are somewhat more likely to pray five times a day (50%) than are converts (37%). There is little difference in the frequency of prayer between Muslims born in the United States (45% all five salah daily) and those born elsewhere (49%). 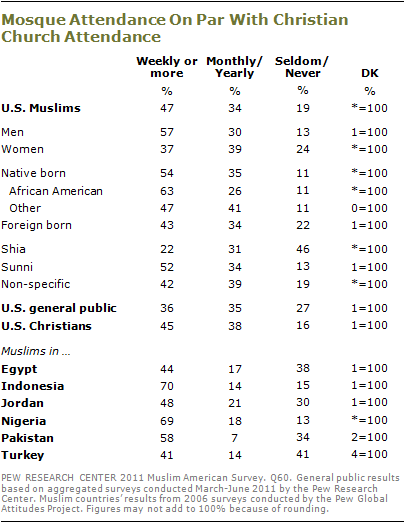 The survey shows that Muslim men attend mosque more regularly than Muslim women (57% of men report attending at least weekly, compared with 37% of women). This is in line with a common understanding among Muslims that attendance at weekly religious services is mandatory for men but optional for women.

Weekly attendance is also more common among native-born Muslims (especially African Americans) than among foreign-born Muslims. Only about one-in-five Shia Muslims (22%) attend religious services at least once a week, compared with about half of all Sunnis (52%). 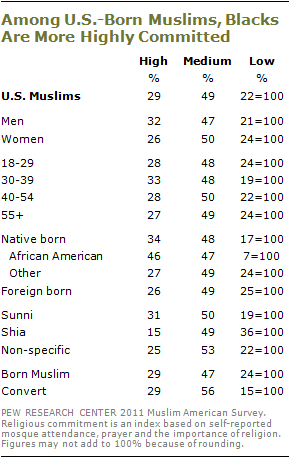 A summary measure of religious commitment was created by combining responses to the questions about mosque attendance, daily prayer and religion’s importance. Overall, nearly three-in-ten Muslim Americans (29%) have a high level of religious commitment, which describes a respondent who attends a mosque at least once a week, prays all five salah every day and says religion is very important in their lives. About one-in-five (22%) have a relatively low level of religious commitment. This group includes those who attend mosque and pray only for the Eid or less often and generally regard religion as not very important in their lives. About half of Muslim Americans (49%) fall somewhere in between.

The religious commitment of Muslim Americans varies significantly by religious affiliation. Among Sunni Muslims, 31% are highly religious, compared with 15% of Shia Muslims.

Religious, But Not Dogmatic 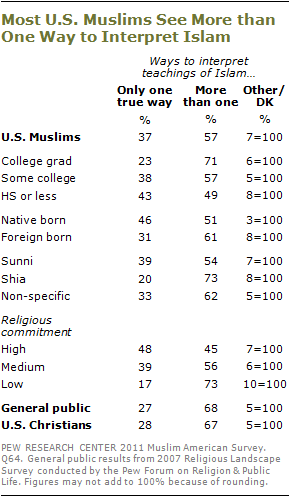 While there is widespread agreement on these core tenets of Islam, most U.S. Muslims (57%) also say there is more than one true way to interpret the teachings of Islam; far fewer (37%) say there is only one true interpretation of Islam. 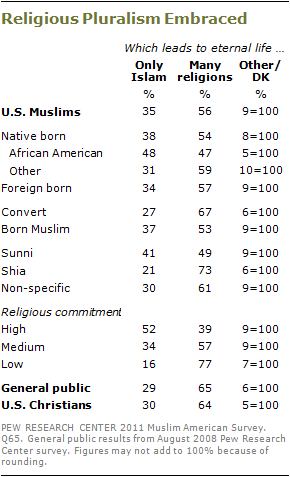 The view that there is only one true interpretation of Islam is much more common among the most religiously committed Muslim Americans, who are evenly divided on this question, than among those with low levels of religious commitment, who say by an overwhelming margin there is more than one true way to interpret Islam. 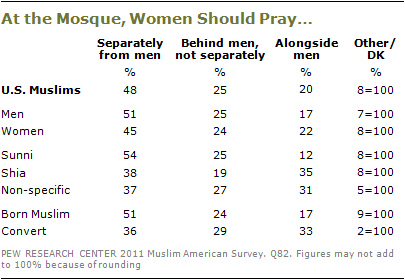 About half of all U.S. Muslims (48%) say that, when praying at a mosque, women should be separate from men, either in another area of the mosque or behind a curtain. A smaller percentage of Muslims say women should pray behind men but with no curtain (25%) or should pray in an area alongside men with no curtain (20%). Muslim American women and men mostly express similar opinions on this question.

Converts from other faith traditions are less comfortable with gender separation than people who have always been Muslim. About half of those who have always been Muslim (51%) believe women should be separate from men at the mosque, compared with slightly more than a third of converts to Islam (36%). The view that women and men should pray separately in the mosque also is more common among Sunnis (54%) than among Shia Muslims (38%). 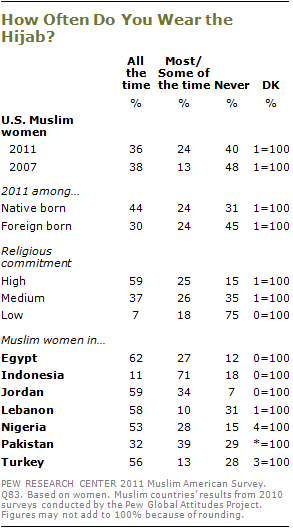 About a third of Muslim American women (36%) report always wearing the headcover or hijab whenever they are out in public, and an additional 24% say they wear the hijab most or some of the time. Four-in-ten (40%) say they never wear the headcover.

Overall, more U.S. Muslim women say they never wear the hijab than do Muslim women in most of the predominantly Muslim nations surveyed by the Pew Global Attitudes Project in 2010.