Muslim Americans are a heavily immigrant population. Of those age 18 and older, more than six-in-ten (63%) were born abroad, and many are relative newcomers to the United States: Fully one-quarter of all U.S. Muslim adults (25%) have arrived in this country since 2000. The Muslim American population also is significantly younger and more racially diverse than the public as a whole. Muslim Americans are just as likely as other Americans to have a college degree, but fewer report having more than a high school education.

Financially, the recent recession appears to have taken a toll on this young, largely immigrant population. The percentage of U.S. Muslims who say they own their homes has slipped since 2007, and the portion at the bottom of the income ladder has grown; 45% of Muslim Americans now report having total household income of less than $30,000 a year, compared with 36% of the general public.

More than a third of Muslim American adults (37%) were born in the United States. But more than three-quarters are either first-generation immigrants (63%) or second-generation Americans (15%), with one or both parents born outside of the country. About one-in-five (22%) belong to a third, fourth or a later generation of Americans.

Foreign-born Muslim Americans are very diverse in their origins. They have come from at least 77 different countries, with no single country accounting for more than one-in-six Muslim immigrants. Pakistan is the largest country of origin, accounting for 14% of first-generation immigrants, or 9% of all U.S. Muslims. In terms of regional origins, however, the largest group is from Arab countries in the Middle East and North Africa, representing 41% of foreign-born U.S. Muslims, or 26% of all Muslim Americans. The South Asian region – including Pakistan, India, Bangladesh and Afghanistan – is second, accounting for about a quarter (26%) of first-generation immigrants, or 16% of all U.S. Muslims. The rest are from sub-Saharan Africa, Europe and elsewhere.

In contrast to the origins of U.S. Muslims, the global distribution of Muslims is somewhat different. Asia has the highest concentration of the global Muslim population, with Indonesia contributing the largest numbers, and Pakistan and India second and third respectively. (For a detailed look at the worldwide distribution of the Muslim population, see this analysis from the Pew Forum on Religion & Public Life; “The Future of the Global Muslim Population: Projections for 2010-2030,” released Jan. 27, 2011.) 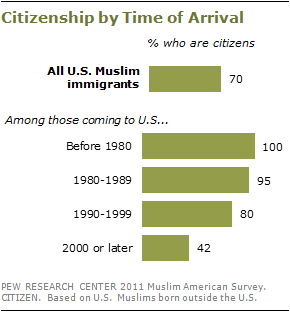 Muslim Americans Are Younger than the Public 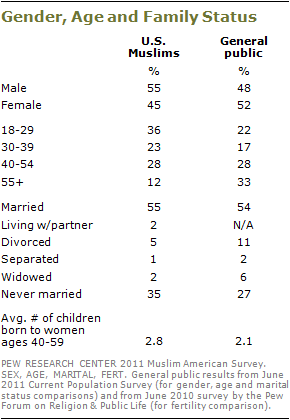 The Muslim American population is much younger, on average, than the non-Muslim population. The survey finds that 59% of adult Muslims are between the ages of 18 and 39, compared with 40% of adults in the general public. Just 12% of Muslim adults are ages 55 and older; 33% of all U.S. adults are 55 or older. In this survey foreign-born Muslims are, on average, somewhat older than native-born Muslims. That is not surprising, since Muslim immigrants (like other U.S. immigrants) tend to arrive as adults and then start families in the United States.

Marriage rates among Muslims and non-Muslims are similar: 55% of U.S. Muslims say they are married, compared with 54% of the general public. However, the percentage of Muslim Americans who report being divorced or separated (6%) is lower than among the public as a whole (13%).

Based on information provided by respondents about the composition of their households, the survey estimates that 55% of the U.S. Muslim population is male and 45% is female, which is different from the gender ratio in the general public (48% male, 52% female). In part, the difference reflects the fact that immigrants from Muslim-majority countries tend to be disproportionately male. There also are more males than females among African American converts to Islam.

The survey also finds that Muslims in the U.S. tend to have somewhat higher fertility rates than the general public. Among women ages 40 to 59, who largely have completed their childbearing years, Muslim women report having had an average of 2.8 children each, compared with 2.1 among all U.S. women. In general, the pattern of higher fertility among Muslim Americans is similar to that seen among many other immigrant groups in the U.S. 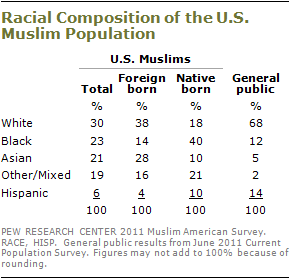 Muslim Americans are racially diverse. No single racial or ethnic group makes up more than 30% of the total. Overall, 30% describe themselves as white, 23% as black, 21% as Asian, 6% as Hispanic and 19% as other or mixed race.

Racial breakdowns vary considerably among foreign-born Muslims from different regions. More than eight-in-ten U.S. Muslims from the Middle East and North Africa region describe themselves as either white (60%) or other/mixed race (22%). By contrast, 91% of Pakistanis and 69% of those from other South Asian nations describe their race as Asian.

The native-born Muslim population contains a higher proportion of blacks, and lower proportions of whites and Asians, than the foreign-born population. Among native-born Muslims, 40% describe themselves as black, while 18% identify as white, 10% as Asian and 10% as Hispanic; 21% say they are of some other race or are mixed race. Among foreign-born Muslims, a majority describe themselves as either white (38%) or Asian (28%), while 14% describe themselves as black, 16% as other/mixed race and 4% as Hispanic. The concentration of blacks is especially high (59%) among third generation Muslims (those who were born in the U.S. of U.S.-born parents). 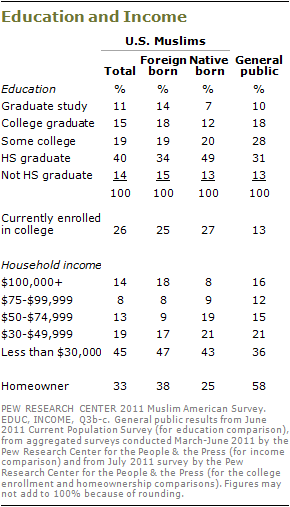 The percentage of Muslims who have graduated from college (26%) is about the same as among all U.S. adults (28%). At the other end of the educational spectrum, there also is no significant difference in the proportion who failed to finish high school (14% of U.S. Muslims, 13% of the general public). Muslim Americans – particularly those born in the United States – are more likely than Americans as a whole to have only graduated from high school. But a very high percentage (26%) says they are currently enrolled in college or university classes (compared with 13% among the general public).

The current income pattern represents something of a decline for Muslim Americans from four years ago, prior to the economic recession. In the 2007 survey, Muslims generally mirrored the U.S. population in household income at all levels. At that time, roughly a third of both Muslim Americans (35%) and the general public (33%) reported earning under $30,000 a year.

One possible explanation for the deterioration may be that the bursting of the housing market bubble in 2006 and the recession that followed from late 2007 to mid-2009 disproportionately affected the young, largely immigrant and racially diverse Muslim American population, much as the sub-prime mortgage crisis and the recession hurt blacks and Hispanics more than it did the general public.1

One-third of U.S. Muslims (33%) now report that they own their homes, compared with 58% of the public. Both figures have declined since 2007. The homeownership rate among Muslims is down 8 percentage points, from 41% four years ago, mirroring the 10-point drop (from 68% in 2007) among all adults nationwide. Declines in homeownership occurred among both native-born and foreign-born Muslims.

Many Young Muslims Are Underemployed 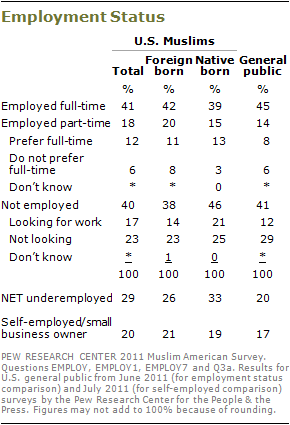 The proportion of Muslim Americans who are employed in full-time jobs (41%) roughly mirrors the general public (45%) and has not changed since 2007. In addition, part-time employment remains fairly common among U.S. Muslims (18%). And one-in-five Muslims (20%) reports being self-employed or a small business owner, about the same level as in the adult population at large (17%).

But underemployment is more common among Muslims than in the general public; 29% of Muslims are either unemployed and looking for work or working part-time but would prefer to have full-time employment, compared with 20% of adults nationwide who are in these circumstances. 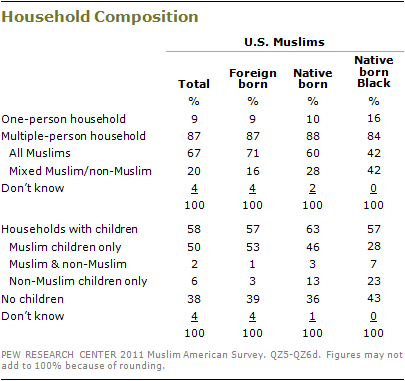 Most adult U.S. Muslims (67%) live in multi-person households in which everyone is a Muslim. Native-born Muslims are more likely to live in a household with at least one non-Muslim than are foreign-born Muslims (28% of those born in the U.S. vs. 16% of those born outside the country). This is particularly the case among native-born African Americans. Nearly half (42%) of native-born African American Muslims live together with at least one non-Muslim.

Number of Muslims in the U.S.

The increase is in line with what one would expect from net immigration and natural population growth (births minus deaths) over the past four years. The 2011 population estimate also roughly accords with separate projections made last year by the Pew Forum’s “The Future of the Global Muslim Population.” For that report, demographers at the International Institute for Applied Systems Analysis (IIASA) in Austria independently estimated the total U.S. Muslim population at about 2.6 million in 2010. The same report also estimated that about 80,000 to 90,000 new Muslim immigrants have been entering the United States annually in recent years.

How the estimate was made

Prior to Pew Research Center’s 2007 survey, no estimate for the Muslim American population, based on widely accepted social scientific methods, was available. Gauging the number of Muslims living in the United States is difficult because the U.S. Census Bureau, as a matter of policy, does not ask Americans about their religion. Nor do U.S. immigration authorities keep track of the religious affiliation of new immigrants. Both the Census Bureau and immigration authorities do collect statistics, however, on people’s country of birth. Researchers can estimate the size of U.S. religious groups by combining this country-of-birth information with data from surveys on the percentage of people from each country, or group of countries, who belong to various faiths.

For example, interviewing used to identify Muslim respondents for the Pew Research Center’s 2011 Muslim American survey (which screened more than 43,000 households, including non-Muslims) finds that 87% of people living in the U.S. who were born in Pakistan, Bangladesh or Yemen are Muslim. Pew Research demographers applied this percentage to country-of-birth figures from the U.S. Census Bureau. The census data show there are 198,000 households in which the head or spouse is from one of these three countries, which when multiplied by the percentage of Muslims from these countries (87%) results in an estimate that there are 173,000 immigrant Muslim households of Pakistani, Bangladeshi and Yemeni extraction.

The survey also asked about other Muslim adults and children in the household. On the basis of this information, an average household size was calculated for each country-of-birth group (or parent’s country-of-birth group) and multiplied by the number of households. The 173,000 Muslim immigrant households from Pakistan, Bangladesh and Yemen, for example, contain an estimated 380,000 Muslim adults and 195,000 Muslim children, for a combined total of 576,000 Muslims in these households. A similar approach was taken for second-generation immigrant households, which were calculated separately. For households with no foreign-born respondents or natives with foreign-born parents (i.e., third-generation households), calculations were made using survey data on age and racial breakdowns of third-generation (or later) Muslim Americans, again applied to U.S. Census data on the third-and-higher generations.