Compared with the general public, fewer Muslim Americans say they are politically conservative, and a greater number say they prefer a bigger government that provides more services.

Muslim Americans align strongly with the Democratic Party and voted overwhelmingly for Barack Obama in the 2008 election. On social issues, Muslim Americans are less accepting of homosexuality than is the general public, and they are slightly more conservative on gender roles.

Party Affiliation and Views of Obama 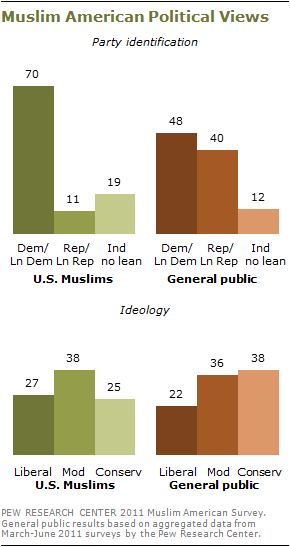 A sizable majority of Muslim Americans identify with the Democratic Party. Seven-in-ten either describe themselves as Democratic (46%) or say they lean Democratic (24%). Far fewer say they are Republicans (6%) or lean to the GOP (5%). About two-in-ten (19%) say they are independent and do not lean toward either party.

In the general public, conservatives tend to identify with the Republican Party or lean Republican, while liberals tend to be Democrats or lean Democratic. Among Muslim Americans, about two-thirds of those who describe themselves as conservatives (68%) say they either belong to the Democratic Party or lean Democratic. That rises to 78% among those who describe themselves as liberal. 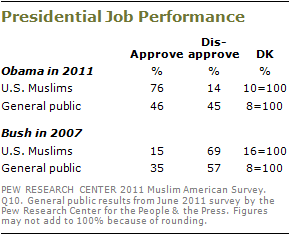 Muslim Americans also overwhelmingly approve of the way Obama is handling his job as president. Three quarters (76%) approve of Obama’s job performance, while 14% disapprove. The public as a whole in June was divided: 46% approved and 45% disapproved of Obama’s performance. 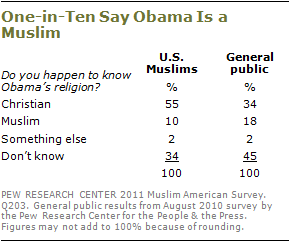 While a majority of Muslim Americans correctly say that Obama is a Christian (55%), one-in-ten (10%) say they think the president is a Muslim. About a third (33%) say they do not know or refused to answer. Last August, 18% of the general public said they thought Obama is a Muslim, while 34% correctly said he is a Christian. Fully 45% said they did not know or refused to answer.

Among Muslim Americans, the less educated and least affluent are more likely to say they think Obama is a Muslim. For example, 15% of those with a high school education or less say they think the president is a Muslim. That drops to 2% among those with at least a college degree. Nearly four-in-ten (37%) among the least educated group say they do not know, compared with 22% among the college graduates. 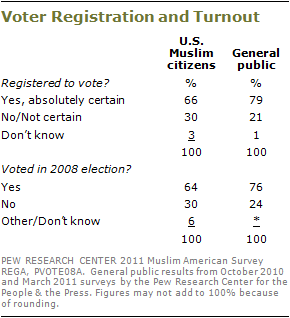 Muslim Americans continue to be somewhat less engaged in several key elements of the political process than the public as a whole. Two-thirds of Muslims who are U.S. citizens say they are certain they are registered to vote (66%). Among the general public, 79% say they are definitely registered to vote. Those numbers are little changed from 2007.

Because the general public question was asked of all U.S. residents, it includes some non-citizens. About 19% of the Muslims currently in the U.S. are not citizens and therefore cannot register to vote. Looking at all Muslims included in the new survey – including those who are U.S. residents but not citizens – 53% say they are absolutely certain they are registered to vote.

Nearly two-thirds of Muslim American citizens (64%) say they voted in the 2008 presidential election, compared with three-quarters of the general public (76%) who say they voted.

Just as with the population as whole, young people are the least likely age group to be registered to vote among Muslim American citizens. Slightly more than half (55%) say they are certain they are registered. That jumps to 73% among those ages 40 to 54 and 79% among those ages 55 and older. 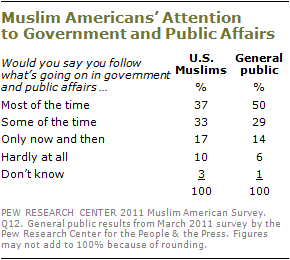 Overall, there is no difference in registration rates between Muslim citizens born in the U.S. and those who were born elsewhere (66% and 67%, respectively). But those who arrived before 1990 are more likely than those who immigrated more recently to be certain they are registered (76% vs. 62%).

Muslim Americans also are slightly less attentive to government and politics than the public as a whole. Seven-in-ten (70%) say they follow what is going on in government and public affairs most of the time (37%) or some of the time (33%). Among the general public, about eight-in-ten (79%) say this, with fully half (50%) saying they follow public affairs most of the 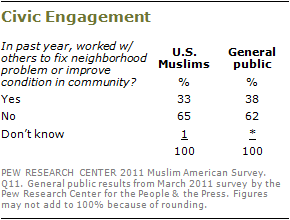 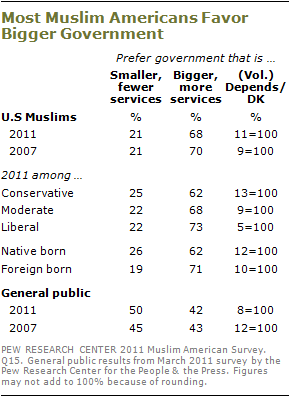 Among the general public, the balance tilts toward a smaller government with fewer services. Half (50%) say they would prefer this, while 42% prefer a more activist government. Those numbers also have shifted only slightly since 2007. 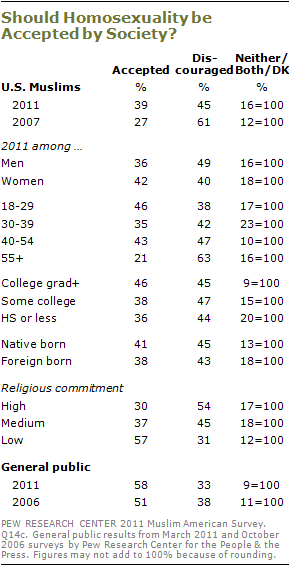 Muslim Americans hold more conservative views than the general public about gays and lesbians. However, they have become more accepting of homosexuality since 2007. 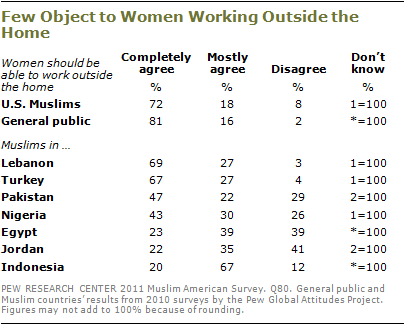 Attitudes among Muslim Americans are similar to attitudes among Muslims in Lebanon and Turkey. But support for women working outside the home is considerably smaller in many other Muslim nations. For example, in Egypt, only about six-in-ten say they either completely agree (23%) or mostly agree (39%) that women should be allowed to work outside the home. About four-in-ten (39%) disagree. 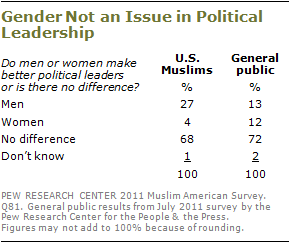 Among the U.S. public, 72% say gender does not determine who will be the better political leader. About one-in-ten each say men (12%) or women (13%) make better leaders.

Responses to a similar question asked in Muslim countries in 2007 show few populations as willing to say that gender makes no difference in the quality of political leaders. Muslims in Morocco proved most similar: 65% said that men and women make equally good political leaders. About two-in-ten (21%) said men generally make better leaders and 5% said women make better leaders. At the other end of the spectrum, 64% of Muslims in the Palestinian territories and 60% in Nigeria said that men generally make better leaders than women. About a third in Nigeria (34%) said they make equally good leaders. Just 16% said this in the Palestinian territories.

Muslims born in the United States are more evenly divided than those born abroad. Among those born here, 48% say they think there is a conflict and the same number say there is not. Among the foreign born, 64% say they see no conflict, while 32% say they do.

Among the general public, the balance tilts more toward evolution. About half (52%) say humans and other livings things have evolved over time, while 40% say these beings have always existed in their present form. 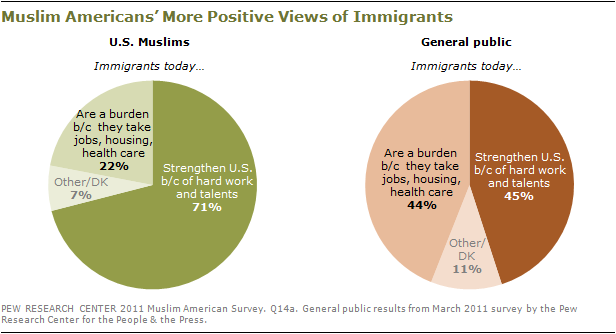