How do these news outlets use Twitter? What function does it serve? Is Twitter another form of marketing and distribution? Or is it a new tool for news gathering? Is it a means of two-way communication with the audience? Or is it a way of adding a new service for users-curation-helping followers know what content elsewhere on the web might interest them?

In general, the major news organizations studied used Twitter to direct audiences to web content that the news organization had produced and posted online. But by and large, news outlets were not using Twitter in more interactive ways, or as a reporting tool. 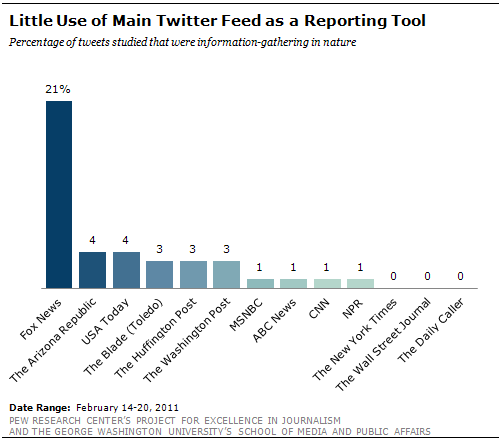 Just 2% of the tweets examined from the main organizational Twitter feeds asked followers for information-either to help inform a story or to provide feedback. Even the most active outlets rarely or never solicited information from their followers. Less than 1% of the tweets from The New York Times, 3% from The Washington Post and 3% from The Huffington Post (one of two online-only news outlets studied) solicited information.

One notable exception to this was Fox News. Although the main Fox News feed had light activity on Twitter, fully one-fifth of its limited tweets (10 of the 48 tweets in the period examined) directly solicited information from followers. For instance, the Fox account solicited input on topics ranging from foreign policy, "Are you tweeting in Iran? Tell us!" and "…follow Bahrain uprising @foxnews/Bahrain – let us know who you are following, we’ll add to the list #Bahrain #Egypt11," to consumer interest topics, "After 16 states banned phosphorus in dishwasher detergent how are YOU getting dishes clean? #cleandishers or email foxnewstips@foxnews.com." While it is unknown how much feedback is actually received from these tweets, engagement with those followers appears to be a bigger part of the Fox News Twitter strategy.

With only 140 characters, Twitter itself can provide only a brief amount of information in a tweet, so the inclusion of links allows followers to easily access the full story for further reading, listening or viewing. But, just as it took news organizations years to link to outside websites that were not part of their own news entity, they now almost solely post links to their own material on Twitter. Mainstream news organizations primarily use Twitter to move information and push content to readers. For these organizations, Twitter functions as an RSS feed or headline service for news consumers, with links ideally driving traffic to the organization’s website. Ninety-three percent (93%) of tweets on mainstream Twitter feeds contained a link that drove traffic back to its home site.

More than 98% of the tweets studied from The New York Times, The Washington Post, USA Today, The Huffington Post, The Daily Caller and NPR included links. The two local papers in the sample, the Toledo Blade and The Arizona Republic, were somewhat less likely to include links in their tweets (70% and 85% respectfully). Fox News was once again an exception. Only 65% of its tweets contained a link, as more of its tweets were conversational and soliciting interaction.

Next: Little Use of Retweet Function
← Prev Page
Page1Page2Page3You are reading page4Page5Page6Page7Page8Page9
Next Page →

How Mainstream Media Outlets Use Twitter Who Tweets When and How Often The News Agenda on Twitter vs. Traditional Platforms
Sharing and Gathering Information
Little Use of Retweet Function Use of Hashtags Individual Reporters' Use of Twitter Methodology Topline