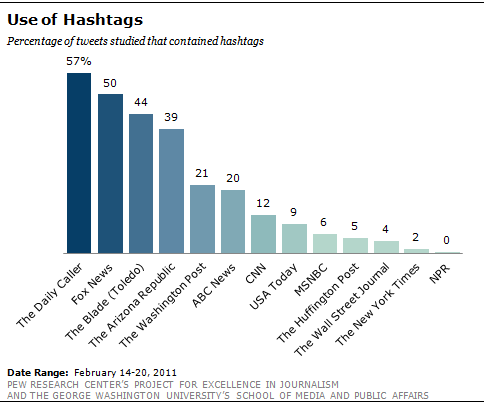 The Washington Post, one of the most active news organizations studied on Twitter, regularly used hashtags (21% of tweets studied included at least one hashtag) to categorize tweets. Fox News and the two local newspapers, The Toledo Blade and The Arizona Republic, used hashtags even more. By contrast, some outlets, including those that had a high volume of tweets like The New York Times and NPR, almost never used hashtags. In the news context, hashtags signal that a tweet (and by extension the linked story) are related to a particular ongoing news story or topic. Given the promotional function that Twitter appears to serve for news outlets, the lack of hashtag usage is perhaps surprising as hashtags would enhance the chance that a news organization’s stories will be read by individuals who are not already following their feed.

A closer look at the nature of hashtag use signals variation as well. Sometimes hashtags themselves are used in promotional ways, such as when CNN uses the #CNN hashtag within tweets. The data show, however, that many hashtags were used to connect a single tweet to an ongoing news story.

For example, there was considerable use of country-based hashtags (#Bahrain, #Egypt, #Yemen) to connect tweets to the ongoing events of the Arab spring in February 2011. For news organizations using hashtags in this way, they are linking their content into a larger conversation about the topic on Twitter. The Daily Caller-an outlet with a high proportion of conservative content-had the highest proportion of tweets with a hashtag of all the organizations examined.[1] A closer look at these tweets shows repeated use of #TCOT and #GOP-hashtags which might help link information from the Daily Caller into politically conservative social networks.

Next: Individual Reporters' Use of Twitter
← Prev Page
Page1Page2Page3Page4Page5You are reading page6Page7Page8Page9
Next Page →

How Mainstream Media Outlets Use Twitter Who Tweets When and How Often The News Agenda on Twitter vs. Traditional Platforms Sharing and Gathering Information Little Use of Retweet Function
Use of Hashtags
Individual Reporters' Use of Twitter Methodology Topline