One common practice on Twitter is retweeting-or passing along an interesting tweet that originated elsewhere. Retweeting, in theory, would allow news organizations to forward another user’s tweet to their news audience; it also has the potential to introduce new voices and new ideas from outside the news organization. In addition, it can expand the reporting on a given topic through the inclusion of other sources. On Twitter, retweeting is a form of curation and recommendation, and it can move very quickly. NPR’s Andy Carvin, who has become known as a leader in the use of Twitter for journalism, has spoken about the value of sharing other peoples’ content, especially when they are on the ground in hard-to-reach places. "I think it’s important to tell the world this footage is available, and you can bear witness," said Carvin in reference to sharing the work of citizen journalists in a war zone.[1]

In general, the news operations studied did not engage in much retweeting. 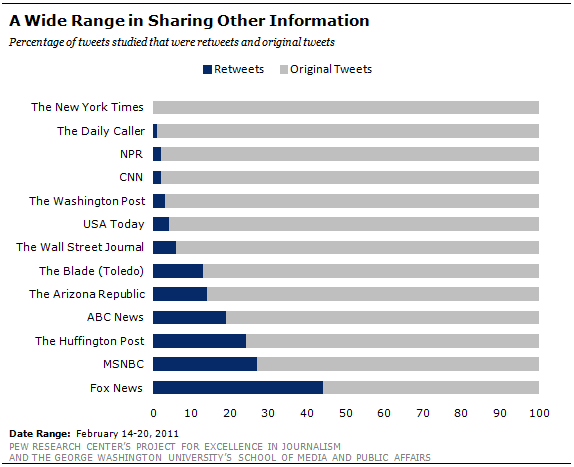 There was also considerable variation in retweeting across outlets. Many of the outlets examined almost never retweeted content from their main feeds. Fox and MSNBC tweeted less overall, but they were far more likely than the other outlets to retweet content (44% of Fox’s tweets and 27% of MSNBC’s tweets were retweets). The Huffington Post (24% of tweets), ABC News (19% of tweets) and the two local papers The Toledo Blade (13%) and The Arizona Republic (14%) were also more likely to retweet content.

How would it benefit journalism if news organizations retweeted content from outsiders? Some argue that Twitter can reveal the process of news creation, forwarding information and checking its veracity. But doing so also raises new questions for those news organizations. If an outlet passes along someone else’s reporting, can they truly vouch for its accuracy? Does retweeting amount to an endorsement?[1] For news organizations that treat their main Twitter feed as an alternative location to distribute the day’s news, forwarding news items that may be unverified or using feeds as part of the reporting process appears inconsistent with the function they assign to the main outlet feed.

Taken together, the retweet data and the findings with respect to the use of Twitter to solicit information suggest that mainstream news outlets are not generally using Twitter to expand the conversation or include alternative perspectives and voices.

[1] In November, the Associated Press issued new social media guidelines in order to address the matter of retweets.  From their guidelines, "Retweets, like tweets, should not be written in a way that looks like you’re expressing a personal opinion on the issues of the day. A retweet with no comment of your own can easily be seen as a sign of approval of what you’re relaying."

Next: Use of Hashtags
← Prev Page
Page1Page2Page3Page4You are reading page5Page6Page7Page8Page9
Next Page →

How Mainstream Media Outlets Use Twitter Who Tweets When and How Often The News Agenda on Twitter vs. Traditional Platforms Sharing and Gathering Information
Little Use of Retweet Function
Use of Hashtags Individual Reporters' Use of Twitter Methodology Topline