The online social networking and messaging service Twitter (also referred to as a micro-blogging tool) was launched on July 15, 2006. By 2011, it was reported to have around 200 million global users.[1] And as of June 2011, 13% of online Americans reported using Twitter, according to data from the Pew Internet & American Life Project, up from sharply from 8% in November 2010.

The confines of the tool, not unlike text messaging (SMS or Short Message Service), are its most distinguishing feature. Individual "tweets" are limited to 140 characters, truncating what any one individual, organization, institution or brand can communicate in a single post. Anyone can search and find Twitter feeds that might interest them either by searching by name, by topic or by "hashtags," a designated topic code that users can assign to a topic or event.[2] Users can also choose to "follow" a Twitter feed, which means they receive all of the posts from that outlet or individual. In the news context, this allows users to curate their own news. If a user "retweets" the post (essentially placing someone else’s post in their own Twitter feed), the ultimate reach of the original post can potentially multiply many times over. 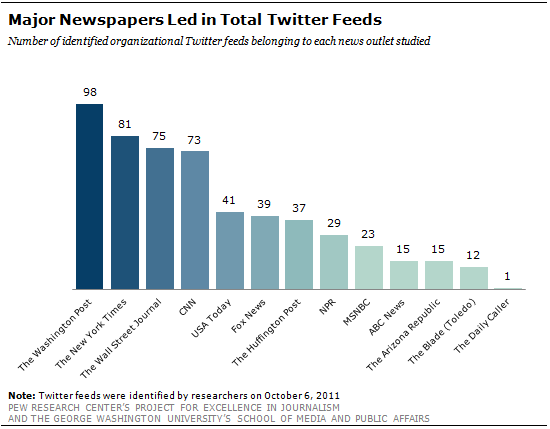 Among the outlets that were studied, Twitter activity varied widely.

One way they differed was in the overall number of separate organizational Twitter feeds or channels offered.[3] On average, the outlets studied offered 41 organizational Twitter feeds, ranging from the general-such as politics-to the narrow-such as Civil War or cycling. The Washington Post offered the largest number of separate feeds, at 98. The Daily Caller, a conservative web-only news operation led by former cable personality Tucker Carlson, offered the fewest, a single feed.[4]

Major national newspapers tend to offer the most: As a group the four papers studied average 74. The three cable news channels average 45. The rest of the outlets studied-broadcast television, audio, online-only and local newspapers-average 18 Twitter feeds per outlet.

The other point of variation was how many tweets outlets offered. The level of daily activity ranged widely.

When it came to the main organizational Twitter feed, The Washington Post tweeted most, with 664 different tweets over the course of the week studied (February 14-20, 2011). That was followed by The Huffington Post (415 tweets) and The New York Times (391). 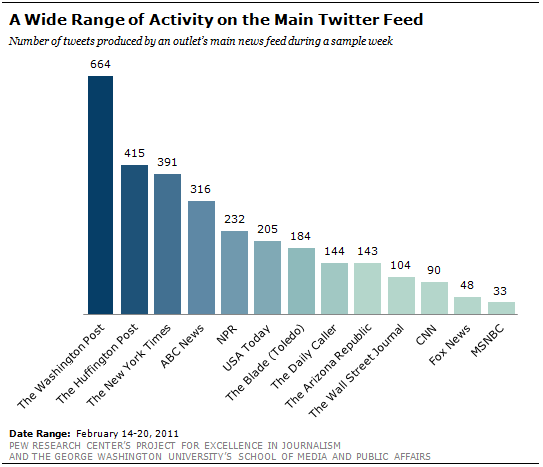 On Twitter, the main public measure of audience reach available is number of "followers"- individuals that have signed up to have all posts from a Twitter feed sent to their own Twitter newsfeed. Following is simple to do-it consists of simply clicking on the "follow" button next to an account. What is not known, though, is whether people ever look at the posts that get sent their way, or whether they actively use their own Twitter account. Thus, the value of a follower is unclear. Nonetheless, having more followers is generally regarded as one sign of success in this realm. 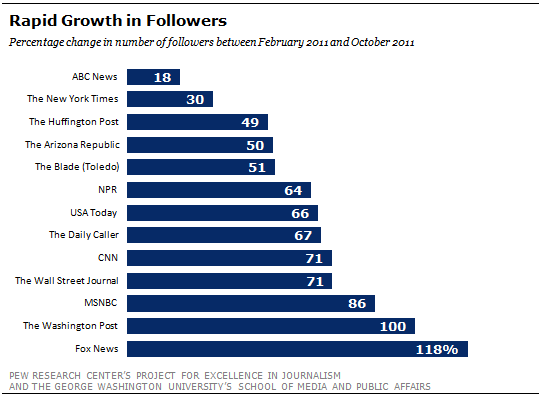 The amount of growth ranged across the outlets that were studied. Several institutional Twitter feeds doubled or nearly doubled in followers, including Fox News (118%), The Washington Post (100%) and MSNBC (86%). Others had more modest growth, including ABC News (18%) and The New York Times (30%).

Overall, the number of online adults who use Twitter grew 63% in the period between November 2010 and June 2011, according to the Pew Internet & American Life Project.

[2] The hashtag symbol (#) is used before key words to categorize tweets and helps facilitate searches within Twitter.

[4] The Daily Caller is a young web-only news site, launched in 2010, and is still building up its presence online.

Next: The News Agenda on Twitter vs. Traditional Platforms
← Prev Page
Page1You are reading page2Page3Page4Page5Page6Page7Page8Page9
Next Page →

How Mainstream Media Outlets Use Twitter
Who Tweets When and How Often
The News Agenda on Twitter vs. Traditional Platforms Sharing and Gathering Information Little Use of Retweet Function Use of Hashtags Individual Reporters' Use of Twitter Methodology Topline