For nearly every news organization, Twitter has become a regular part of the daily news outreach. But there are questions about how those organizations actually use the technology: How often do they tweet? What kind of news do they distribute? To what extent is Twitter used as a new reporting tool or as a mechanism for gathering insights from followers?

To answer some of these questions, the Pew Research Center’s Project for Excellence in Journalism and The George Washington University’s School of Media and Public Affairs collaborated on a study of Twitter feeds from 13 major news organizations.[1] 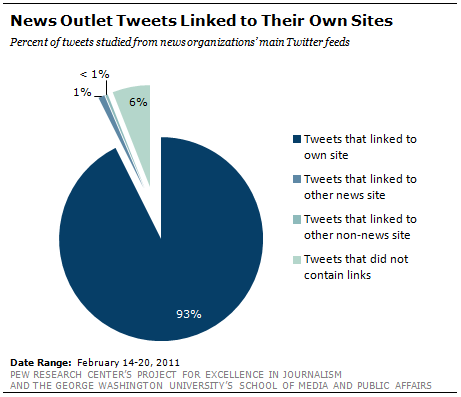 The research, which examined more than 3,600 tweets over the course of a week, reveals that these news organizations use Twitter in limited ways-primarily as an added means to disseminate their own material. Both the sharing of outside content and engagement with followers are rare. The news content posted, moreover, matches closely the news events given priority on the news organizations’ legacy platforms.

This is not to say that news organizations are not tapping into public sentiment on Twitter through other means. News staff may well be reading, even sometimes doing so on air, the comments posted by their followers. And reporters may have their own list of Twitter feeds that they check regularly. Still, these findings reveal limited use of the institution’s public Twitter identity, one that generally takes less advantage of the interactive and reportorial nature of the Twitter.

This behavior resembles the early days of the web. Initially, news organizations, worried about losing audience, rarely linked to content outside their own web domain. Now, the idea is that being a service-of providing users with what they are looking for even if it comes from someone else-carries more weight. It bears watching whether Twitter use for mainstream news organizations evolves in this same way. 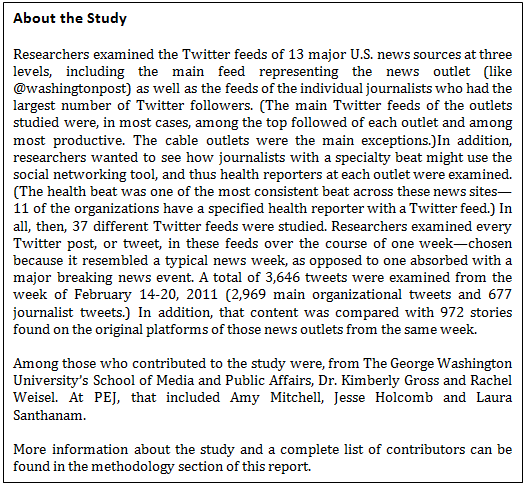 [1] The outlets studied come from the five main sectors of mainstream media-print, network TV, cable, online and radio. They were selected based on audience size and for their comparability with the broader sample in PEJ’s sample of outlets used in the News Coverage Index. For each outlet, researchers analyzed separately the main organizational Twitter feeds, the feed of the most followed individual reporter at each outlet and, where they existed, the health reporter’s Twitter feed.

[3] It is conceivable that in another week, one in which a major breaking news event occurred, the Twitter universe among mainstream media outlets would look different. The goal of this study, however, is to assess the nature of Twitter use during a typical week, not an extraordinary one.

Next: Who Tweets When and How Often
← Prev Page
You are reading page1Page2Page3Page4Page5Page6Page7Page8Page9
Next Page →

How Mainstream Media Outlets Use Twitter
Who Tweets When and How Often The News Agenda on Twitter vs. Traditional Platforms Sharing and Gathering Information Little Use of Retweet Function Use of Hashtags Individual Reporters' Use of Twitter Methodology Topline