As smartphone ownership has increased in both advanced and emerging economies, the growth has often been uneven. Age, gender, education levels and income all contribute to who owns a smartphone – though, often, age is the key factor associated with ownership.

In advanced and emerging economies alike, younger people are much more digitally connected than older generations. In every country surveyed, those under 35 are more likely to own smartphones, to use the internet and to use social media than those ages 50 and older. For example, nearly all Japanese under 35 own a smartphone (96%), while fewer than half of those over 50 do (44%), a gap of 52 percentage points. The gap is 53 points in Brazil, where 85% of those ages 18 to 34 own a smartphone compared with just 32% of those 50 and older. Even in countries like Germany and Australia, where smartphone ownership rates far outpace those in Brazil, younger adults are far more likely to own smartphones than older age groups. 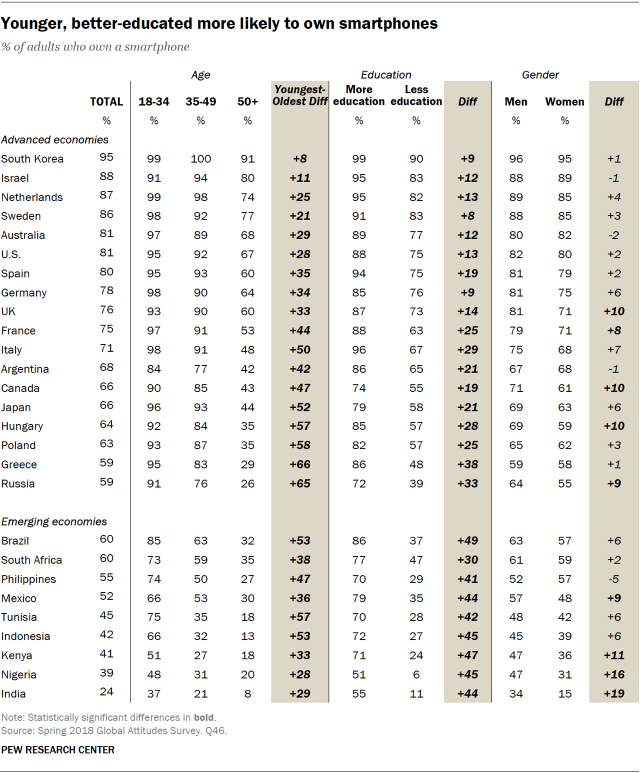 The opposite pattern is visible in emerging economies: In many of these countries, the age gap in ownership is growing. Over the past five years, smartphone adoption has soared among young adults in emerging economies. Across nine emerging economies surveyed in 2013, around one-in-four adults ages 18 to 34 owned smartphones. By 2018, that share had grown to at least around two-thirds in most countries. Those ages 50 and older, however, have been much slower to become smartphone owners. Generally, fewer than one-in-ten owned smartphones in 2013, and while that share has grown substantially in all countries, it stands at around one-in-five today. 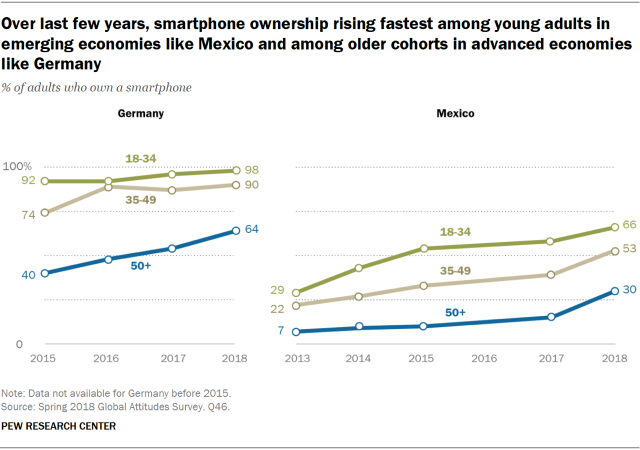 In most countries, men and women are equally likely to own smartphones

Whereas age is one of the key factors associated with smartphone ownership, internet use and social media use across all the countries surveyed, there are fewer differences when it comes to men and women and their technology adoption. In 18 of the 27 countries, for example, men and women are about equally likely to own smartphones. And the nine countries where men are more likely to own smartphones than women – Canada, France, Hungary, the UK, Russia, India, Kenya, Nigeria and Mexico – do not fit a single pattern in terms of economic development. Moreover, in most of these countries, the gap in ownership is relatively small.

In most countries, too, there are relatively minimal gender gaps in social media use. In some advanced economies, like the U.S., Spain and Australia, women are more likely than men to use social media sites like Facebook, while in other advanced economies, such as Japan and France, men are slightly more likely to use these sites. Only in Kenya, Nigeria and India – three countries where smartphone ownership also differs substantially by gender – are there relatively large gender differences in social media use. In these three countries, women are less likely than men to use social media sites. While about half of Kenyan men use social media, for example, only a third of women do. (See Appendix E for detailed tables).

Not only are gender gaps in smartphone ownership, internet use and social media use relatively small in most countries studied, but smartphone ownership has increased by similar degrees for both men and women. For example, in Indonesia today, 45% of men own a smartphone, compared with 39% of women. This gap of 6 percentage points is nearly identical to the 4-point gap seen in 2013, when 13% of men and 9% of women owned smartphones. Similarly, in Australia, nearly identical percentages of men and women own smartphones today (80% and 82%, respectively) – and this has been the case since the question was first asked in 2015, when 78% of men and 77% of women reported owning smartphones. 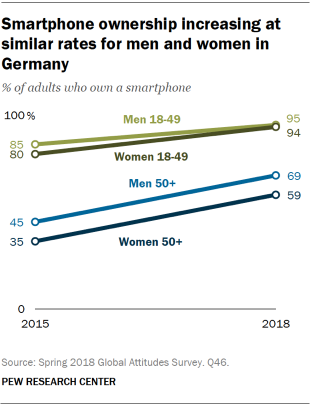 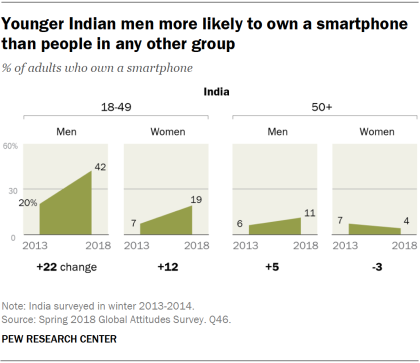 Income and education are related to smartphone ownership, internet use and social media use (see Appendix E for detailed tables). In every country surveyed, for example, better-educated and higher-income people are more likely to go online than those with less education or lower incomes.

When it comes to social media use, the education gaps in emerging economies are wide. Indonesia illustrates the general pattern. There, nearly three-in-four adults (72%) with a secondary education or more report using social media sites like Facebook compared with about a quarter of adults with lower levels of education (23%), a gap of 49 percentage points.

Income gaps in social media use tend to be somewhat narrower than education gaps, but in nearly every country surveyed, people with higher incomes are more likely to use social media than people with lower incomes.

Next: Acknowledgments
← Prev Page
Page1Page2You are reading page3Page4Page5Page6Page7Page8Page9Page10
Next Page →