Mobile technology has spread rapidly around the globe. Today, it is estimated that more than 5 billion people have mobile devices, and over half of these connections are smartphones. But the growth in mobile technology to date has not been equal, either across nations or within them. People in advanced economies are more likely to have mobile phones – smartphones in particular – and are more likely to use the internet and social media than people in emerging economies. For example, a median of 76% across 18 advanced economies surveyed have smartphones, compared with a median of only 45% in emerging economies.

Smartphone ownership can vary widely by country, even across advanced economies. While around nine-in-ten or more South Koreans, Israelis and Dutch people own smartphones, ownership rates are closer to six-in-ten in other developed nations like Poland, Russia and Greece. In emerging economies, too, smartphone ownership rates vary substantially, from highs of 60% in South Africa and Brazil to just around four-in-ten in Indonesia, Kenya and Nigeria. Among the surveyed countries, ownership is lowest in India, where only 24% report having a smartphone.

Countries are grouped into two economic categories, “advanced” and “emerging,” based on multiple sources and criteria, including: World Bank income classifications; per capita gross domestic product (PPP); total size of the country’s economy, as measured by GDP; and average GDP growth rate between 2013 and 2017. For more information, see Appendix A. 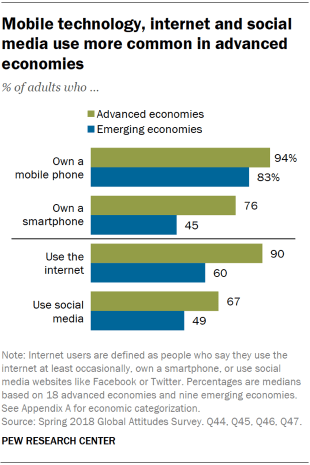 Whether in advanced or emerging economies, younger people, those with higher levels of education and those with higher incomes are more likely to be digitally connected.1 2 Younger people in every country surveyed are much more likely to have smartphones, access the internet and use social media. In all of the advanced economies surveyed, large majorities under the age of 35 own a smartphone. In contrast, smartphone ownership among advanced economies’ older populations varies widely, ranging from just about a quarter of Russians 50 and older to about nine-in-ten older South Koreans.

However, in many of these advanced economies, the age gap in smartphone ownership has been closing since 2015. Two factors may contribute to this narrowing gap: First, those under 35 were already very likely to own smartphones when asked in 2015, presenting a “ceiling” of sorts. Second, the older age group appears to be steadily adopting smartphone technology. For example, nine-in-ten or more Americans ages 34 and under have had a smartphone since 2015, while the ownership rate among the 50-and-older age group has risen from 53% to 67% over the same period. 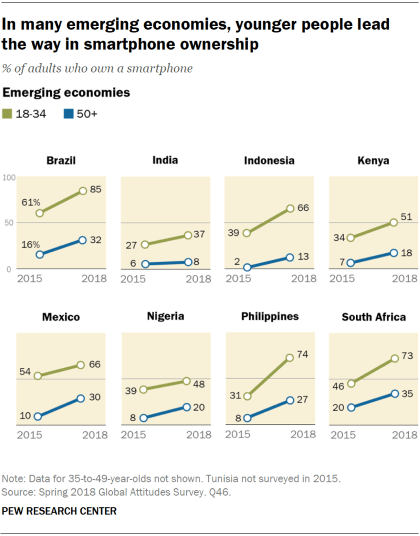 Further, in most emerging economies, the age gap in smartphone ownership has been growing in recent years. Although the older age group is more likely to have phones now than they were a few years ago, the rate of adoption has been much faster among the younger age group. In the Philippines, for example, those 34 and under are 47 percentage points more likely to have a smartphone today than those ages 50 and older – compared with a gap of only 23 percentage points in 2015.

Education and income level also play sizable roles when it comes to explaining differences in technological use in most countries. In every country surveyed, better-educated and higher-income people are more likely to use the internet than people with lower levels of education or income. And in nearly every country, the same is true of social media use. The education gaps in emerging economies are especially wide. For example, a majority of Nigerians with a secondary education or more use social media (58%) compared with just 10% of Nigerians with less education, for a gap of 48 percentage points. The education gap in internet use is an even wider 53 points: 65% of more-educated Nigerians use the internet compared with just 12% of those with lower levels of education.

In contrast, gender plays only a limited role in explaining differences in technological use in most countries. Whether in advanced or emerging economies, men and women generally use technology – including smartphones, the internet and social media – at similar rates. For example, the gender gap in smartphone ownership is usually in the mid-single digits, where gaps exist at all. In Japan, for instance, 69% of men own smartphones compared with 63% of women. And, in most countries, men and women have largely obtained smartphones at similar rates in recent years, meaning that the gender gap in usage has remained constant. In Brazil, for example, while 38% of women and 43% of men owned smartphones in 2015, today 57% of women and 63% own them – a nearly identical gap at both points in time.

The notable exception to this pattern is India, where men (34%) are much more likely than women (15%) to own smartphones – a gap of 19 percentage points. And India’s gender gap is growing: Today’s gap is 10 points wider than it was just five years ago (then, 16% of men and 7% of women owned smartphones).

Next: 1. Digital connectivity growing rapidly in emerging economies
← Prev Page
You are reading page1Page2Page3Page4Page5Page6Page7Page8Page9Page10
Next Page →