Smartphone adoption also continues to increase in emerging nations. While the share of the public that owns a smartphone remained largely unchanged between 2017 and 2018 in most advanced economies surveyed – due to the already high ownership rates evident in 2017 – it increased in eight of the nine developing economies surveyed.

Across all 27 countries surveyed, there is a strong relationship between smartphone ownership and per capita gross domestic product (by purchasing power parity, or PPP) – a trend which has held steady since the question was first posed in 2015. 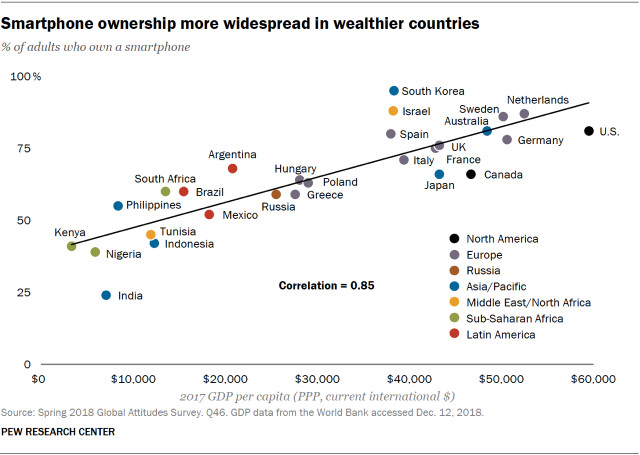 Smartphones are increasingly the most common mobile phone 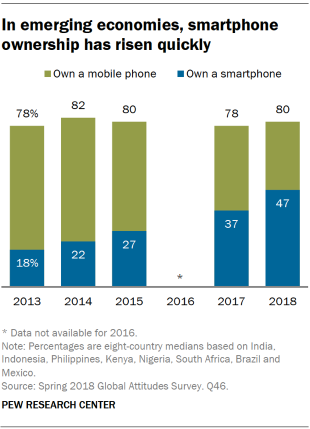 For example, three years ago, 89% of South Africans owned a mobile phone. Today, the share who own a mobile phone of some kind has ticked up to 94%, while smartphone ownership has grown from just over a third (37%) to a majority of the population (60%).

In emerging economies, internet use is growing rapidly

Internet use is nearly universal in most advanced economies surveyed. In the United States, Sweden, Australia, the Netherlands, Israel and South Korea, more than nine-in-ten use the internet. And in emerging economies, about half or more use the internet in every country but India.

Usage is also growing rapidly in these emerging economies. For example, five years ago less than half of the Mexican public (45%) and only about a third of Filipinos (34%) used the internet at least occasionally or owned a smartphone. Today, internet use in these countries stands at 73% and 66%, respectively.

But these internet use estimates are complicated by an evolving understanding of what “using the internet” means. Previous Pew Research Center surveys have calculated internet use based on the share of the public who either report using the internet at least occasionally or who say they own a smartphone. These individuals were then the only ones who were asked whether they used social media or not.

Social media use more common in advanced than emerging economies