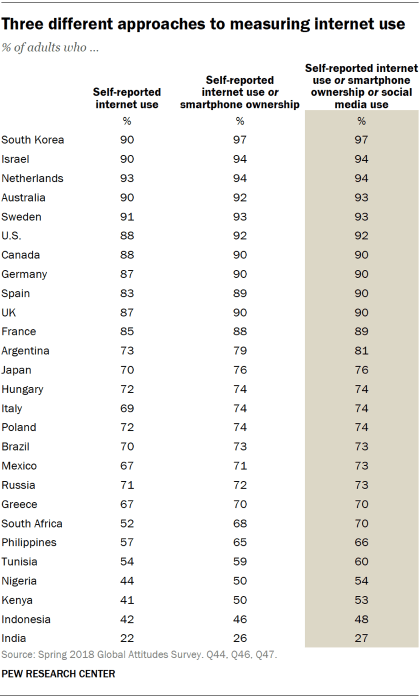 Previous Pew Research Center Global Attitudes surveys have calculated internet use based on the share of the public who either report using the internet at least occasionally or who say they own a smartphone. These individuals were the only ones who were asked whether they used social media or not. This year, however, everyone was asked whether they ever use online social media sites like Facebook or Twitter – even if they said they did not own a smartphone or use the internet. Results indicate that there is a small but noteworthy share of people who report using social media but who say they do not use the internet.

We can therefore provide three estimates of internet use: one based on respondents’ self-reported internet use; one that adds smartphone ownership, as Pew Research Center has done in recent years; and one that accounts for social media use as well. While these results tend to be very similar, a small share of people in nearly every country surveyed underreport internet use. This is especially true in Kenya (14%), Nigeria (14%) and South Africa (18%), where around one-in-six of those who report using social media say they do not use the internet.