While most Indians say that men and women should share some family responsibilities, many still support traditional, patriarchal values. For example, a slim majority of Indians (54%) say that both the men and the women in a family should be responsible for earning money. But 43% instead take the view that men should be the primary earners. Moreover, nearly two-thirds of Indians (64%) – including 61% of women – express complete agreement with the idea that a wife always is obligated to obey her husband.

Indian attitudes about gender roles within family settings vary widely across religious groups. In general, Sikhs and Buddhists are the most likely to support an equal distribution of family responsibilities, while Muslims are often the least egalitarian in their attitudes. For example, a large majority of Sikhs say both men and women should earn money in a family (80%) and that both sons and daughters should tend to their parents’ funeral rituals (69%). But Muslims are much less likely to view these as shared responsibilities (37% and 24%, respectively); most Indian Muslims say these roles should fall to men and sons.

Younger Indian adults typically are no less traditional than their elders in their views on family gender roles, and these attitudes do not vary much between men and women. For instance, 33% of Indian women (along with 34% of men) say that sons should have greater rights than daughters to inherit from parents. But college graduates often are more likely than other Indians to support gender equality in the family. College-educated Muslims, for example, are much more inclined than Muslims with less education to say that sons and daughters should have equal inheritance rights (83% vs. 55%).

Gender attitudes also differ greatly depending on where people live within India. For example, survey respondents in the country’s Southern region generally are less likely than those living in the country’s Hindi Belt to say that a wife always must obey her husband. But Indians in Southern states don’t necessarily go so far as to support egalitarian gender roles in a family – in fact, people in the South are less likely than those in the Hindi Belt to say responsibilities like caring for children or earning money should be shared between men and women.

These broad regional differences often are accompanied by large variations between bordering states. For instance, people in two Southern states, Karnataka and Kerala, have widely different views about family roles. Karnataka residents, for example, are more than twice as likely as people in Kerala to say sons should have the primary responsibility to care for their parents as they age (60% vs. 25%) – part of a broader pattern in which Karnataka consistently stands out as having conservative attitudes on gender roles, while Kerala typically is much less traditional. 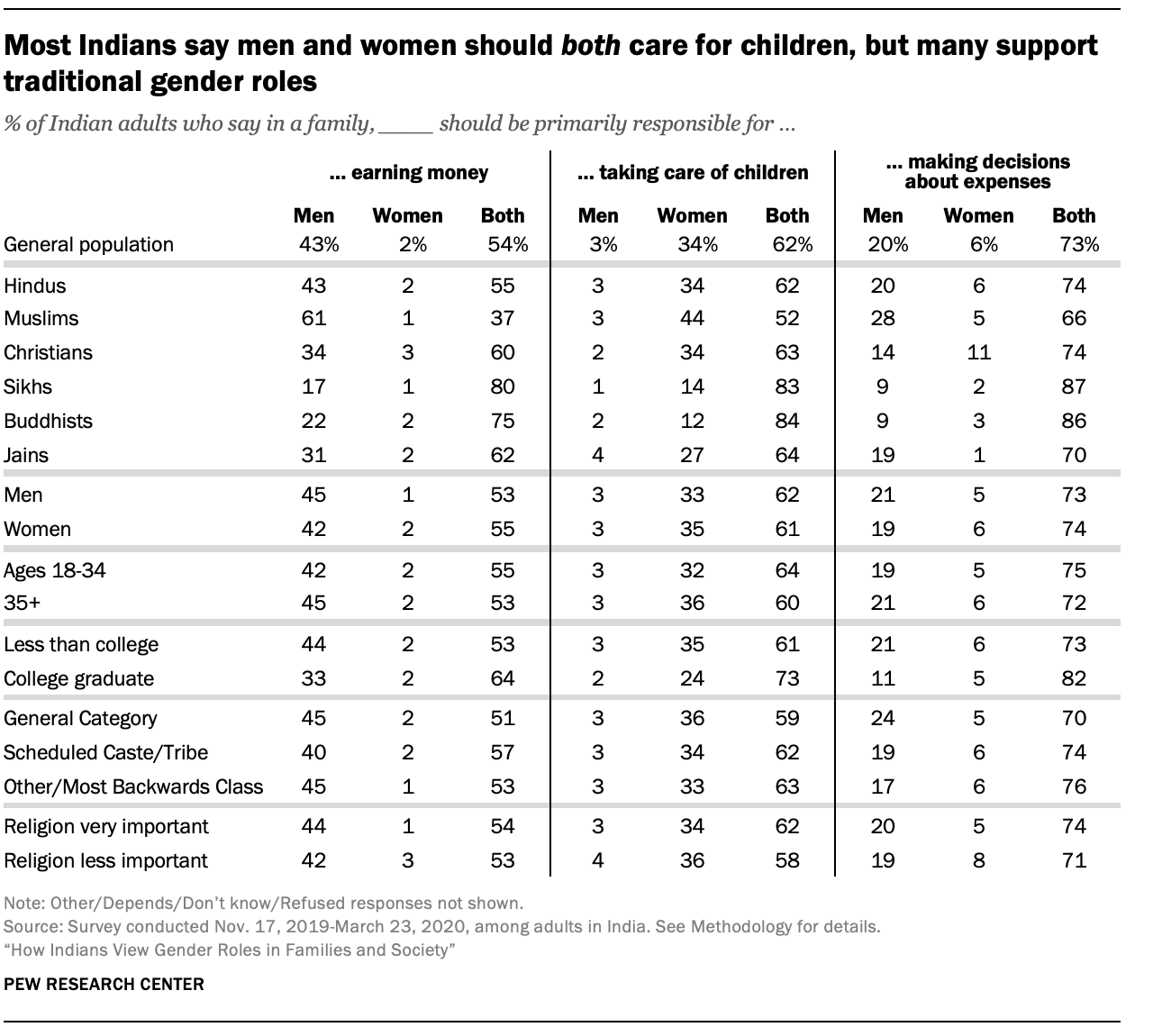 Some religious groups are more traditional than others when it comes to gender roles in a family. For example, Muslims are more inclined to say men should be the primary earners in a family and make family financial decisions, while women should mainly be responsible for the children. Sikhs and Buddhists, meanwhile, are the most likely to say men and women should share equally in these family responsibilities.

Education also makes a big difference in how Indians think family responsibilities should be distributed. College graduates are more likely than other Indians to say men and women should share family duties. For example, roughly three-quarters of college graduates say both men and women in a family should care for children (73%), compared with about six-in-ten among all other Indians (61%). 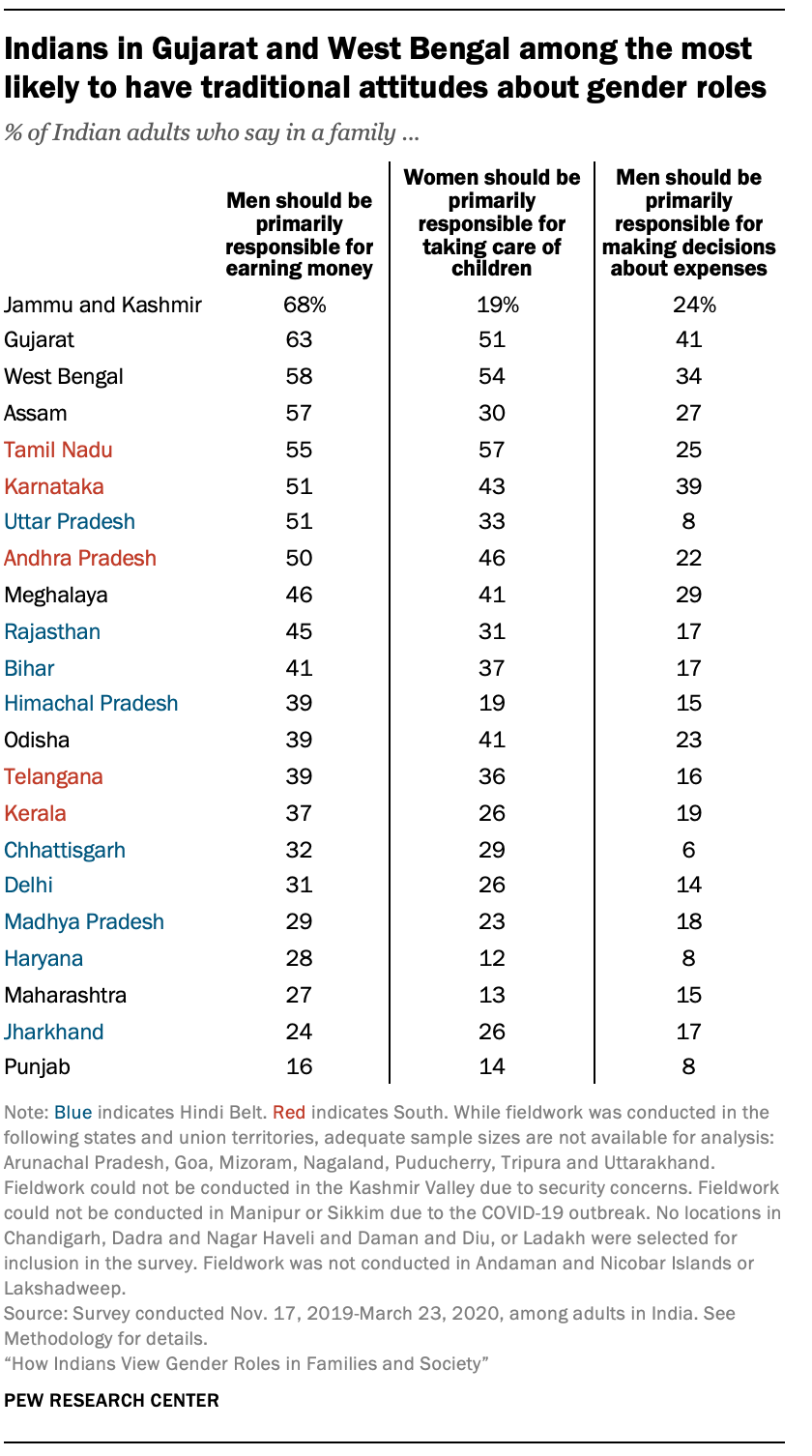 Indian attitudes about family gender roles greatly depend on where people live. Generally, Southern Indians are more likely than Indians living in the country’s Hindi Belt – defined as 11 states and union territories including Jharkhand, Haryana, Madhya Pradesh, Delhi and Chhattisgarh – to have traditional attitudes about family responsibilities. For instance, people in the Southern state of Tamil Nadu are more than twice as likely as people in Jharkhand to say men should earn money in a family (55% vs. 24%) and women should care for children (57% vs. 26%).

Attitudes on these issues also vary greatly within certain regions of the country. Among Southern states, for example, Kerala and Telangana stand out as having less conservative views on gender than some of their neighbors. For instance, one-in-five people or fewer in Kerala (19%) and Telangana (16%) say men should make family financial decisions, compared with roughly four-in-ten in Karnataka (39%).

Even though most Indians think men and women should share in family responsibilities, nearly nine-in-ten Indians (87%) completely or mostly agree with the notion that “a wife must always obey her husband.” This includes a majority of Indians (64%) who completely agree with this sentiment.

Women are only modestly less likely than men to say that wives should obey their husbands in all situations, and most women agree completely with this sentiment (61% vs. 67% among men).

Indians without a college education, those from Other Backwards Classes and those who live in rural areas are more inclined than other Indians to completely agree that wives must be obedient. For example, most Indians without a college degree (65%) completely agree that a wife must always obey her husband, compared with roughly half of college graduates who say the same (52%). Religious commitment also factors into this traditional attitude about marriage: People who say religion is very important in their lives are much more likely than other Indians to completely agree that a wife should obey her husband (67% vs. 44%).

Indians who currently live in a joint family – single households that include extended family members, such as when three generations of grandparents, parents and children live under the same roof – also are more likely than others to express complete agreement with the idea that wives should obey their husbands in all situations (69% vs. 57%).

Even though people in the Southern states of India are more inclined than people in the Hindi Belt to support traditional family responsibilities, they generally are less likely to see wives as obligated to obey their husbands. Roughly a third in Tamil Nadu (36%) and Karnataka (34%) completely agree that a wife should always obey her husband, compared with vast majorities in Hindi Belt states such as Himachal Pradesh (90%), Uttar Pradesh (82%) and Bihar (81%).

Across India’s major religious groups, most people say both sons and daughters should care for parents as they age, including the vast majority of Sikhs (80%). But Muslims generally are less inclined than others to say children of both genders should share the responsibility to care for aging parents (54%), while many Muslims (43%) say sons should carry the bulk of responsibility for elderly parents.

Attitudes about who should tend to aging parents do not vary much by caste, except in some religious groups. Among Hindus, for example, caste isn’t correlated with attitudes on whether sons or daughters should care for aging parents. But Christians from higher castes are more likely than Christians from lower castes to say both sons and daughters should care for parents in their elderly years (75% vs. 61%).

But much smaller shares in neighboring Southern states favor sons taking on the bulk of the responsibility for elderly parents. Only about a quarter of Indians in Kerala (25%) and Tamil Nadu (27%) say sons primarily should care for their aging parents.

Indians without a college degree are more likely than college graduates to say sons should primarily tend to parents’ last rites or burial rituals (64% vs. 53%). Indians from Other Backwards Classes (69%) also are more inclined than those in other castes to say this (60% among General Category, Scheduled Caste and Scheduled Tribe members).

Those who say religion is very important in their lives are considerably more likely than other Indians to say sons alone should be responsible for funeral rituals (65% vs. 49%). And this is true even among Sikhs, who are less inclined in general to support the view that sons bear primary responsibility for funeral rites. For instance, highly religious Sikhs are nearly twice as likely as those who say religion is not very important in their lives to say sons should shoulder the responsibility for their parents’ last rites (31% vs. 17%).

In India, politics also are linked with views on this question. Those who express a favorable view of the ruling Bharatiya Janata Party (BJP) are somewhat more likely than other Indians to say sons should be primarily responsible for their parents’ last rites and burial rituals (67% vs. 60%).

Attitudes on this issue also vary greatly by state. The vast majority of people in Uttar Pradesh (84%) and Gujarat (80%), for example, say sons should be responsible, while about three-in-ten in Sikh-majority Punjab (29%) agree.

Southern states are especially varied in their views. About eight-in-ten people in the Southern state of Karnataka (81%) say sons should tend to their parents’ funeral rituals, while just three-in-ten in Kerala take this stance.

Nearly two-thirds of Indians (64%) say sons and daughters should have equal inheritance rights from parents, including majorities across all religious groups.

But some religious groups are more egalitarian than others when it comes to inheritance. Sikhs (84%) and Buddhists (81%), for example, are more likely than Hindus (64%), Christians (63%) and Muslims (56%) to say sons and daughters should have equal inheritance rights. About a third of Hindus (34%) and an even larger share of Muslims (42%) say that sons should have greater rights to inheritance.

Across groups, college graduates are more likely than Indians with less education to say sons and daughters should have equal rights to inheritance from their parents (77% vs. 63%). The gap is especially pronounced among Muslims – the vast majority of college-educated Muslims (83%) say sons and daughters should have equal inheritance rights, while just a slim majority of less-educated Muslims (55%) support equal inheritance rights for both genders.

While women and men nationally are about equally likely to say sons and daughters should have equal rights of inheritance (65% vs. 63%, respectively), this opinion is a bit more common among Muslim women than Muslim men (60% vs. 53%). Still, among Indian women overall, a third say that sons should have greater rights to inheritance, compared with just 2% who say the same about daughters.

Once again, Indians in different states vary considerably in their support for sons having greater rights to inheritance from their parents – from roughly six-in-ten in Telangana (62%) to one-in-ten in Chhattisgarh (10%).

Sikh-majority Punjab ranks among the states with the smallest shares of Indians who say inheritance rights should belong disproportionately to sons. But while there is a gap of 22 percentage points between Sikhs and Hindus at the national level on this question, similarly small shares of Punjabi Hindus (15%) and Punjabi Sikhs (11%) say sons should have greater rights to inheritance from parents.

How Indians View Gender Roles in Families and Society 1. Views on women’s place in society 2. Son preference and abortion
3. Gender roles in the family
Indians tend to say men and women should share family responsibilitiesVast majority of Indians agree that a wife must always obey her husbandMany Indians say sons should have prominent place in caring for elderly parentsMajority of Indians say sons should be responsible for parents’ last ritesMost Indians say both sons and daughters should have equal rights to inheritance
Acknowledgments Methodology