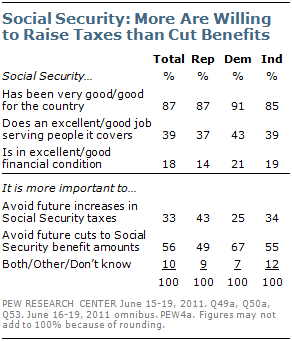 As with Medicare, an overwhelming majority (87%) says that Social Security has been good for the country. At the same time, however, just 39% say it does an excellent or good job serving the people it covers and only 18% say the program is in excellent or good financial condition. There is little variation in these evaluations by party, but Republicans and Democrats differ in their views about the program’s future.

Most Americans say avoiding future cuts to the program is more important than avoiding increases in Social Security taxes for workers and employers (by 56% to 33%). Two-thirds of Democrats (67%) say avoiding benefit cuts is more important; that compares with 55% of independents and 49% of Republicans. 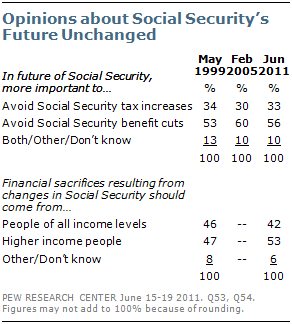 Opinions on this issue are little changed since either 2005 or 1999. Democratic and Republican opinions are nearly identical to opinions in 2005. However, independents are now less likely to prioritize avoiding benefit cuts (55% today, compared with 63% in 2005).

There has been a small shift in opinion about whether the costs associated with changes in Social Security should be borne by all income groups or by those with higher incomes since 1999. Today, a slim majority (53%) says that higher income people should make these financial sacrifices. Twelve years ago, public opinion was evenly split (47% higher income people, 46% people of all income levels). This is primarily driven by changing attitudes among Democrats; 70% of Democrats now say the costs should fall to higher-income people, up from 51% in 1999. 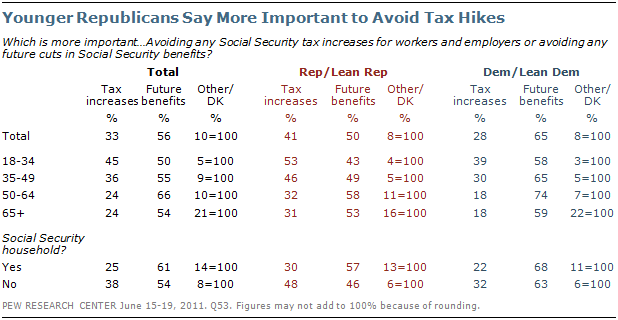