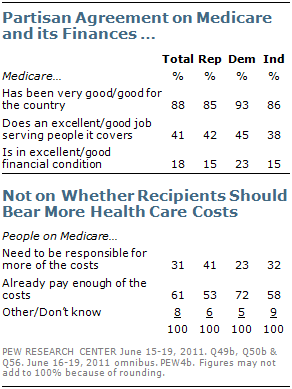 Nearly nine-in-ten (88%) give Medicare positive marks for its contributions to the country over the years, and these positive assessments cross party lines. There also is general agreement over the job Medicare does serving the people it covers (41% of Americans say it does an excellent or good job), and its financial shape (just 18% say it is in excellent or good financial condition).

Within the general public, opinions on this issue show modest variations by age and income. Democratic opinions, in particular, are relatively uniform. However, younger and more affluent Republicans are more likely than other Republicans to say Medicare participants should shoulder additional responsibility for the cost of their health care: 45% of Republicans and Republican leaners under 35 say people need to be more responsible, while just 27% of those 65 and older share this view. Nearly half (48%) of Republicans and Republican leaners with family incomes of $75,000 or more advocate more individual responsibility for the costs of Medicare, compared with just 33% among those with annual incomes below $30,000. 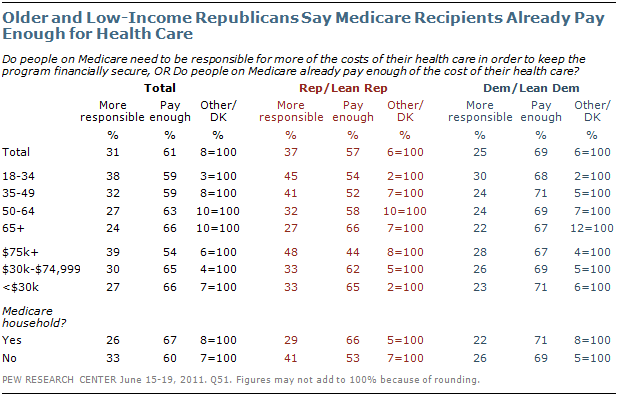 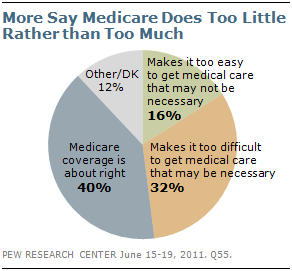 A broader debate among Medicare analysts and policymakers is whether the system encourages the overutilization of medical treatments, driving up the overall cost of the program. While the extent of the problem may be debated in policy and economic circles, it has little resonance with the general public. Just 16% of Americans say that Medicare makes it too easy to get medical care and treatments that may not be necessary. Twice as many (32%) are of the view that Medicare in fact makes it too difficult to get medical care and treatments that may be necessary for patients.

The plurality view, held by 40%, is that current Medicare coverage is about right in this regard. This is the assessment of 61% of people age 65 and older, very few of whom think Medicare goes too far (12%) or not far enough (12%).

Next: Section 4: Views of Medicaid
← Prev Page
Page1Page2Page3You are reading page4Page5Page6Page7
Next Page →