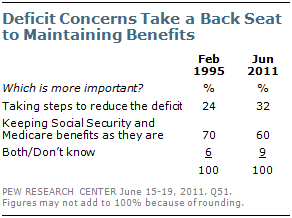 Despite rising public concern about the federal budget deficit, Americans favor keeping Social Security and Medicare benefits as they are rather than taking steps to reduce the budget deficit (by 60% vs. 32%).

The public has shifted slightly from where it stood 16 years ago, when deficit reduction was being debated between then President Bill Clinton and the new Republican majority in Congress. In February 1995, 70% prioritized keeping benefits as they were, while just 24% said deficit reduction was more important. And then as now, Republicans were twice as likely as Democrats to prioritize the deficit (33% vs. 16%).

Age Gaps in Both Parties

While majorities in all age groups say maintaining current benefits is more important than deficit reduction, this sentiment is strongest among people over 50. About two-thirds of those 50 and older (65%) say keeping benefits as they are is the priority; that compares with 55% of those younger than 50.

These generational differences produce some degree of disagreement within each party’s base. Notably, Republicans and Republican leaners who are 65 and older prioritize benefits over deficit reduction (52% vs. 35%), while those under age 50 are divided on the issue. The generation gap is even wider among Democrats and Democratic-leaning independents. Fully 81% of Democrats and Democratic-leaners who are 65 and older say keeping benefits as they are should take precedence, as do 77% of those age 50-64. While roughly two-thirds (65%) of Democrats under 50 share this view, a substantial minority – 31% – says deficit reduction should take precedence.

Although the generational gaps are large, partisanship plays a much larger role in these opinions. Even the youngest Democrats are more supportive of maintaining benefits than the oldest Republicans (63% vs. 52%).

By more than two-to-one, people with household incomes under $30,000, as well as those earning between $30,000 and $75,000, say keeping benefits as they are is more important than deficit reduction. Only among those with annual incomes over $75,000 is there a division of opinion, with as many prioritizing deficit reduction (46%) as benefits (48%).

By contrast, there are no differences in the views of Democrats across income categories. Sizable majorities of Democrats and Democratic leaners in every income group say that keeping benefits as they are is more important than deficit reduction. 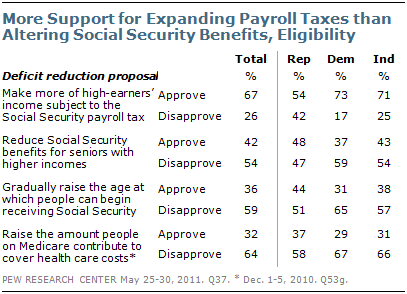 The public’s unwillingness to see Social Security and Medicare benefits cut in the interest of deficit reduction is evident when specific benefit reforms are tested.

In May, the Pew Research Center asked about 12 deficit reduction proposals; only one proposal related to entitlement programs received majority support, and it is a proposal linked to Social Security taxes, not benefits (For more, see “More Blame Wars than Domestic Spending or Tax Cuts for Nation’s Debt,” June 7, 2011.) By a 67% to 26% margin, most Americans approve of making more of high-earners’ income subject to the Social Security payroll tax. This includes seven-in-ten Democrats and independents, and even a slim majority of Republicans.

Next: Section 3: Views of Medicare
← Prev Page
Page1Page2You are reading page3Page4Page5Page6Page7
Next Page →