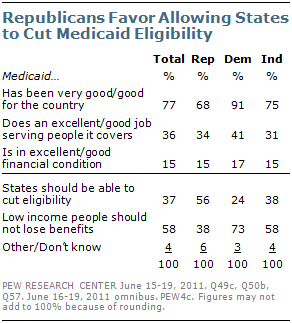 In contrast to opinions about Medicare and Social Security, there are clear partisan differences in assessments of Medicaid. About three-quarters of the public (77%) say the program has been good for the country, but that percentage rises to 91% of Democrats and falls to 68% of Republicans; 75% of independents say it has been good for the country.

Ratings of how well Medicaid serves its constituents are considerably lower across the board (36% say it does an excellent or good job), with Democrats giving slightly better evaluations than Republicans and independents.

And while there is little partisan variation in the positive ratings for the program’s financial condition (about 15% of all groups say it is in excellent or good shape), both Republicans and independents are significantly more likely than Democrats to say the program is in poor fiscal shape (45% of Republicans and 42% of independents, compared with 26% of Democrats).