As policymakers at the state and national level struggle with rising entitlement costs, overwhelming numbers of Americans agree that, over the years, Social Security, Medicare and Medicaid have been good for the country.

But these cherished programs receive negative marks for current performance, and their finances are widely viewed as troubled. Reflecting these concerns, most Americans say all three programs either need to be completely rebuilt or undergo major changes. However, smaller majorities express this view than did so five years ago.

The public’s desire for fundamental change does not mean it supports reductions in the benefits provided by Social Security, Medicare or Medicaid. Relatively few are willing to see benefit cuts as part of the solution, regardless of whether the problem being addressed is the federal budget deficit, state budget shortfalls or the financial viability of the entitlement programs.

The latest national survey by the Pew Research Center for the People & the Press, conducted June 15-19 among 1,502 adults, finds that Republicans face far more serious internal divisions over entitlement reforms than do Democrats. Lower income Republicans are consistently more likely to oppose reductions in benefits – from Medicare, Social Security or Medicaid – than are more affluent Republicans.

Lower income people are more committed to maintaining benefits across all three major entitlement programs. This income gap is particularly wide when it comes to allowing states to cut back on Medicaid eligibility: 72% of those with family incomes of less than $30,000 oppose allowing states to limit Medicaid eligibility to deal with budget problems, compared with 53% of those with higher incomes.

GOP Base Divided over Entitlement Changes 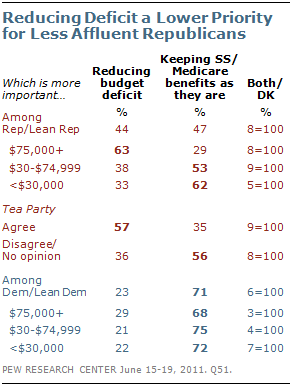 The GOP’s internal divisions over entitlement changes are seen particularly in views of whether it is more important to maintain Social Security and Medicare benefits or to take steps to bring down the deficit.

Democrats face no such internal divisions, as both high- and low-income Democrats prioritize maintaining benefits over deficit reduction; there also are no ideological differences among Democrats over this issue. Notably, the balance of opinion among low-income Republicans is similar to how Democrats view the issue.

Next: Section 1: Impressions of Entitlement Programs
← Prev Page
You are reading page1Page2Page3Page4Page5Page6Page7
Next Page →

Older Americans Have Been Highly Resistant to Medicare Changes
Debt and Deficit: A Public Opinion Dilemma
In Deficit Debate, Public Resists Cuts in Entitlements and Aid to Poor
Republicans Are Losing Ground on the Deficit, But Obama’s Not Gaining
Medicare Voucher Plan Remains Unpopular