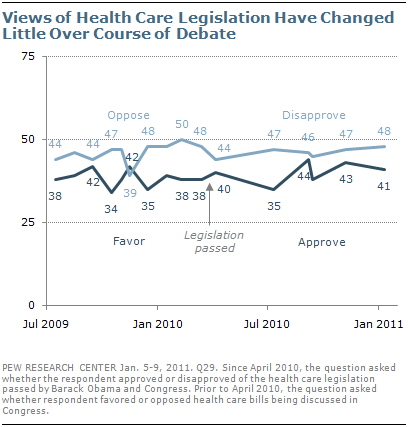 The GOP’s push to repeal last year’s health care legislation has drawn only modest public support. Close to four-in-ten (37%) favor repealing the health care law, but nearly as many (35%) say the law should be expanded. Far fewer (20%) say they would like Congress to leave the law as is. Shortly after the midterm elections in November, 40% favored the law’s repeal, while 30% supported expanding the law and 22% wanted to leave the law as it is.

No Consensus about Future of Health Care Legislation 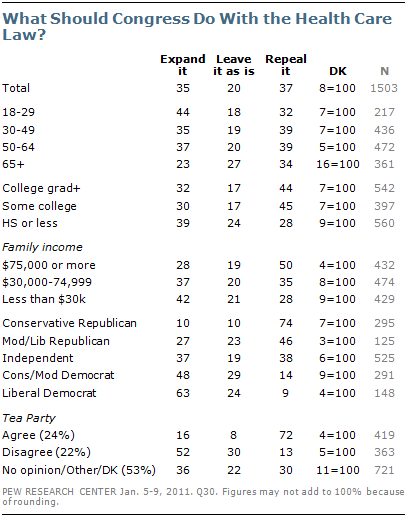 There is little difference across age groups in support for repealing the health care legislation. However, younger people are somewhat more likely than older Americans to favor expansion. Among those younger than 30, 44% favor expanding the law, 32% favor repealing it and 18% say it should be left as is. Among those 65 and older, 23% say expand it, 34% say repeal it and 27% say leave it as is.

There are key differences within the parties in views about the future of the legislation. Support for repeal is particularly high among conservative Republicans (74%), but garners less support from moderate and liberal Republicans (46%). And while a majority of liberal Democrats (63%) advocate for expanding the bill, enthusiasm for expansion is more muted among conservatives and moderates in the party (48%). 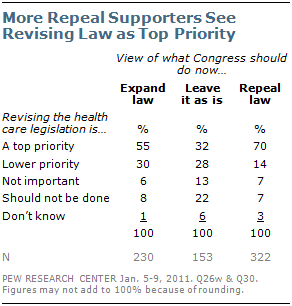 Most Americans (56%) say that revising last year’s health care law should be a top priority for the president and Congress. But views of the importance of this objective vary widely according to people’s opinions of what they want Congress to do with the law.