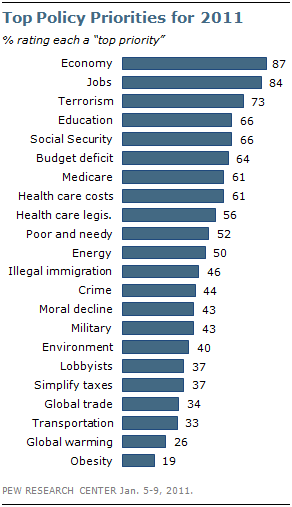 The public’s policy agenda is again dominated by the economy and jobs with other major issues viewed as less important. Fully 87% say that strengthening the economy should be a top priority for the president and Congress and 84% rate improving the job situation as a top priority, by far the highest percentages among 22 issues tested.

The latest national survey by the Pew Research Center for the People & the Press, conducted Jan. 5-9 among 1,503 adults, finds that concern about the budget deficit has increased in recent years. Currently, 64% view reducing the budget deficit as a top priority, up slightly from 60% a year ago, and 53% in 2009. Yet reducing the deficit continues to lag far behind the economy and jobs among the public’s priorities.

This also is true for policy goals related to health care, whether reducing health care costs (61% top priority) or revising last year’s health care law (56%). The public continues to be divided over what it wants to see done with the health care law – 37% favor its repeal, while nearly as many (35%) want the law expanded, and 20% would leave it as it is. 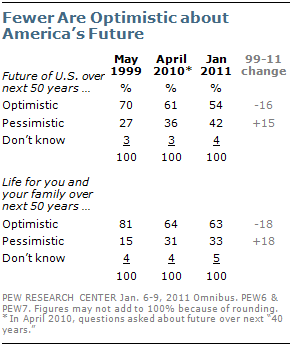 The survey finds that just 23% are satisfied with current national conditions, which is little changed from the last few months. And compared with the late 1990s, there is far less optimism about the country’s long-term future.

In May 1999, when the economy was thriving, 70% were optimistic about the future of the U.S. over the next 50 years, while only 27% were pessimistic. Pew Research’s report on that survey – “Optimism Reigns, Technology Plays a Key Role” – reflected the public’s upbeat mood.

Last year, in a survey conducted by the Pew Research Center in partnership with Smithsonian Magazine, fewer expressed a positive view of the long-term future; still, optimists far outnumbered pessimists (61% to 36%). In the current survey, 54% are optimistic about life over the next half-century while 42% are pessimistic.

People’s predictions about their own lives in coming decades also turned more negative between 1999 and 2010. But there has been no change in the past year. Somewhat more are optimistic about the lives of themselves and their families over the next 50 years than they are over the future of the country (63% vs. 54%).

The annual policy priorities list has shifted over the years. For example, jobs have long been a public concern, 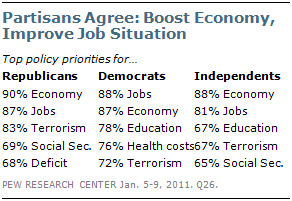 As in the past, there are wide partisan differences over the importance of a number of issues. But strengthening the economy and improving the jobs situation are leading goals for Republicans, Democrats and independents alike. Defending the country from future terrorist attacks also ranks very high among all 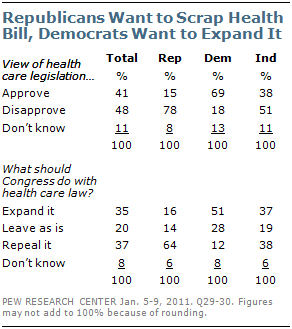 three groups, though more Republicans (83%) see this as a top priority than do Democrats (72%) or independents (67%).

The survey finds that many of the issues that have consistently clustered near the bottom of the annual priorities list, such as dealing with global trade and dealing with global warming, remain there in 2011. Yet the lowest-ranking priority of the 22 issues included this year is dealing with obesity. Just 19% say that dealing with obesity should be a top priority for the president and Congress. While Democrats (26% top priority) and independents (20%) are more likely than Republicans (8%) to view this as a top priority, it ranks at the bottom of the list among all three groups.
One of the biggest partisan gaps is over the goal of reducing health care costs – 76% of Democrats rate this as a top priority compared with 48% of Republicans. By contrast, there is very little partisan difference in opinions about the importance of revising the health care legislation passed last year – though it is clear that Republicans and Democrats have very different ideas about how to revise the legislation.

More than six-in-ten (64%) Republicans support repealing health care legislation while roughly half (51%) of Democrats support expanding it. Independents are divided – 38% would repeal the legislation and 37% would expand it. Notably, the option of leaving the legislation as it is wins only modest support across the board.

By an overwhelming margin (78% to 11%), Americans think it is more important for President Obama to focus on domestic policy rather than foreign policy. These opinions are little changed over the past two years. 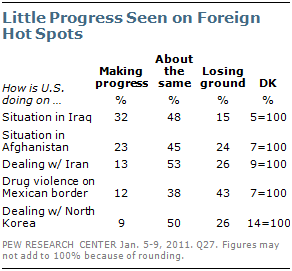 The public’s focus on domestic issues also is reflected in opinions about the most important national problem: In an open-ended format, 35% cite unemployment or the lack of jobs, while 27% cite the economy more generally; just 6% cite international or foreign issues. There also has been little change in views of leading national problems over the past year.

At the same time, most Americans do not think that the U.S. is making progress on such hot-button international issues as Iraq, Afghanistan, Iran and in dealing with drug violence along the Mexican border.

Iraq is the only issue tested where more think the United States is making progress (32%) rather than losing ground (15%); a plurality (48%) says that things in Iraq are about the same as they have been. On Afghanistan, roughly the same percentage says the U.S. is losing ground (24%) as sees it making progress (23%), while 45% say things are about the same.

Next: Section 1: Public’s Policy Priorities
← Prev Page
You are reading page1Page2Page3Page4Page5
Next Page →