A decade ago, in January 2001, the public’s policy agenda was very different. Then as now, strengthening the economy ranked at the top, but it was followed closely by improving education, reducing crime, and securing Social Security and Medicare. Improving the job situation ranked eighth among 11 policy priorities listed. 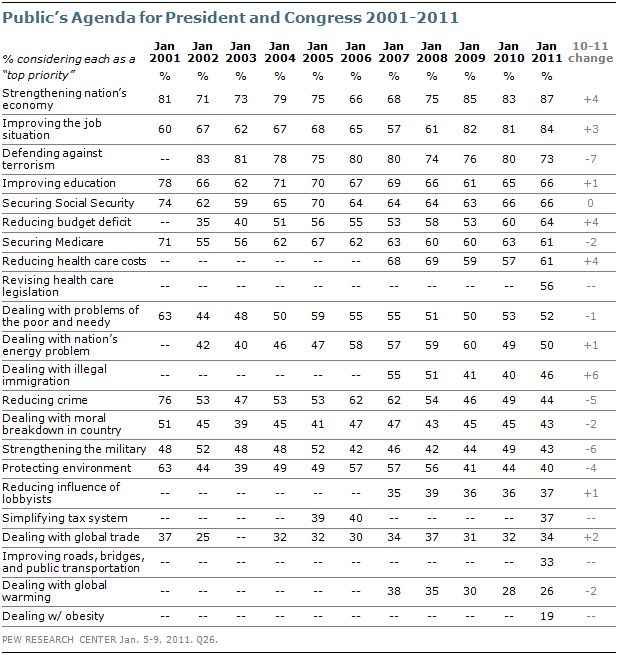 Today, the economy and jobs are the leading priorities, followed by defending the country against terrorism 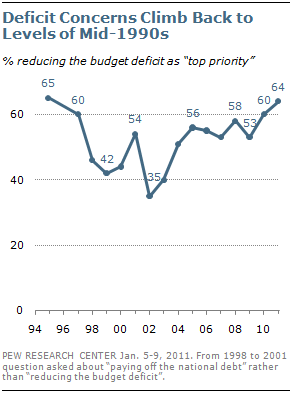 (73% top priority). Terrorism has been at or near the top of the annual priorities list since it was first included in 2002.

Reducing the budget deficit, or national debt, rated as a top policy priority during the 1990s, declined in importance in the early part of this decade, and has made a comeback in recent years. In January 2002, four months after the 9/11 attacks, just 35% said that reducing the budget deficit should be a top policy priority for President Bush and Congress. 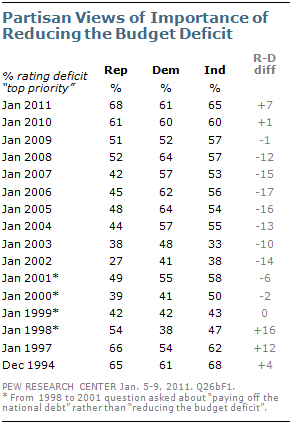 Typically, members of the party that does not hold the White House view reducing the deficit as a more important priority than do members of the president’s party. This pattern was particularly evident during the Bush administration.

In the new survey, 68% of Republicans and 61% of Democrats see reducing the budget deficit as a top policy priority (this difference is not statistically significant). While deficit reduction ranks fifth among Republicans, it is the 9th-ranking priority for Democrats. 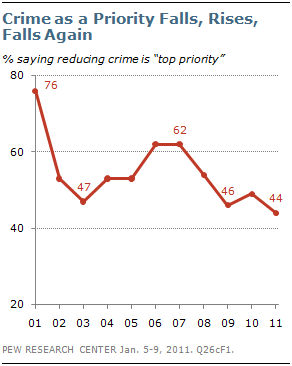 With declining crime rates, the proportion saying that reducing crime should be a top national priority has fallen dramatically.

Compared with a decade ago, there has been an across-the-board decline in the percentage viewing crime as a major priority. However, as was the case in 2001, poor people and less-educated people are far more likely to rate crime as a top policy priority than are better educated and more affluent people. 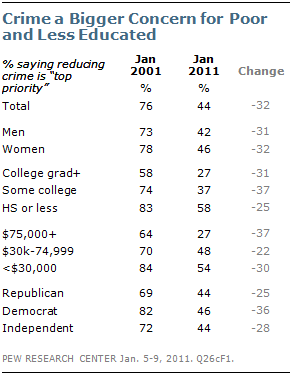 Democrats also are far more likely to view reducing health care costs (28-point partisan gap), dealing with the problems of the poor (26 points), protecting the environment (24 points), and improving the educational system (23 points) as top priorities than are Republicans. These differences also are in line with previous policy priority surveys. 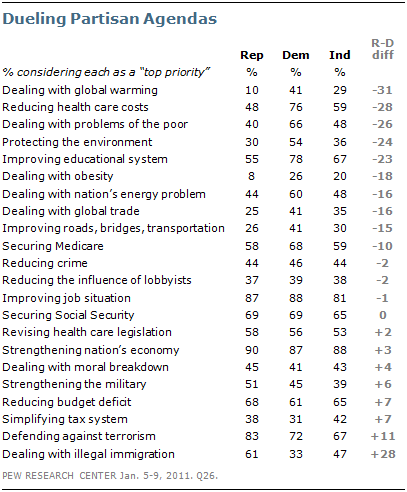 Improving the nation’s roads, bridges, and transportation does not rank as a particularly high priority for Democrats, Republicans or independents. Still, Democrats are more likely to see this as important (41% top priority vs. 30% of independents, 26% of Republicans. This is the case for dealing with obesity as well.

As in previous surveys, dealing with illegal immigration is a much higher priority for Republicans (61%) than for independents (47%) or Democrats (33%). There are more modest differences (11-point partisan gap) over defending the country from future terrorist attacks. These differences also are little changed from previous years.

Next: Section 2: Views of Long-Term Future, Past
← Prev Page
Page1You are reading page2Page3Page4Page5
Next Page →