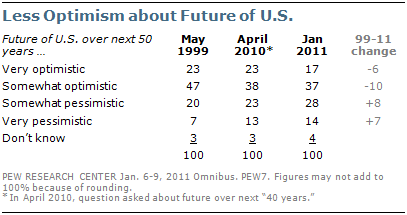 Most Americans are optimistic about the future of the U.S. over the next 50 years, but optimism has declined since April 2010 and is down considerably from the boom period of the late 1990s. 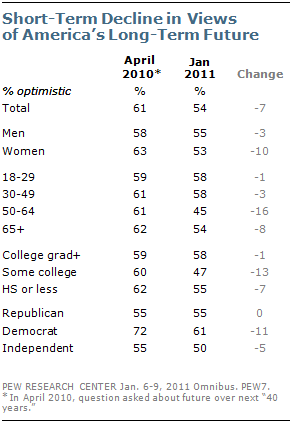 Since spring 2010, older Americans, particularly those 50 to 64, have become more pessimistic about the long-term future of the country. Optimism among those ages 50 to 64 has declined 16 points since April 2010, while there has been no substantive change among those younger than 50.

Democrats also have become significantly less optimistic about the long-term future. In April 2010, 72% were either very or somewhat optimistic; in the current survey that figure is down 11 points to 61%. A similar decline in long-term optimism for the country can be seen among women (down 10 points) and those with lower levels of education.

While expectations for the future of the country over the next 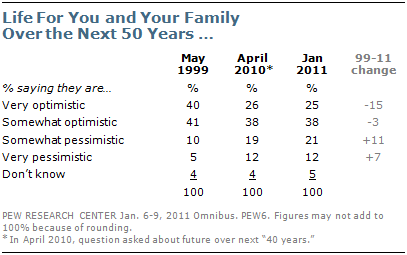 50 years have declined since last April, personal expectations have remained stable. More than six-in-ten (63%) say they are either very (25%) or somewhat (38%) optimistic about life for their family over the next 50 years. This is unchanged from April 2010, though down significantly from May 1999.

People younger than 50 are among the most optimistic about life for their family in the future; nearly three-quarters (74%) express optimism compared with far fewer (50%) of those 50 and older.

Looking Back: Life Better Since the 1960s? 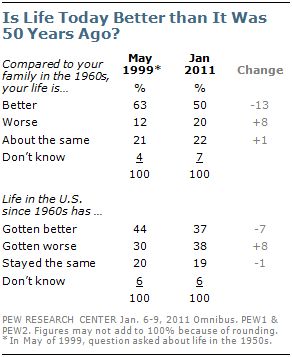 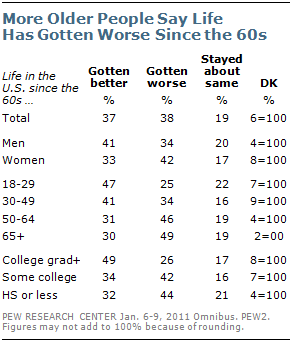 say life in the U.S. has gotten worse since the 1960s. By contrast, those younger than 30, who have no personal memories of the 60s, are more likely to say that life has gotten better since then (47% better vs. 25% worse).

Better educated people also are more likely than those with less education to say that life has gotten better in the United States since the 1960s.