The engagement level of Reddit users taking part in the candidate discussions over the three months studied echoes earlier research about other digital spaces. The majority of authors offered just a single comment naming a candidate, while fewer came back with multiple comments over the course of the study.

Undoubtedly there may be instances where a user added additional comments without mentioning a candidate directly. But these findings reinforce much of what we have found in previous studies: A 2015 study of local news habits found that just a small share (less than one-fifth) of commenters to Facebook pages of news outlets left more than two comments. Another study found that on Twitter a small core of active users (12%) tweeted 100 times or more during a four week period. Among all social media users, we have found that just a small fraction say they have posted videos or photos they themselves have taken of a news event. 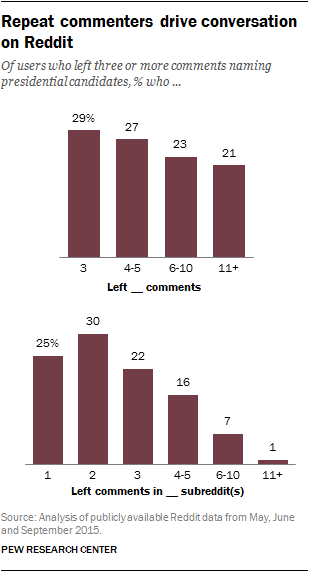 Highly engaged users – those who left three or more comments – tended to leave more than just three comments, as well as participate in multiple forums. About one-in-five of these commenters (21%) left more than 10 comments naming a candidate over the three months studied, and nearly half (45%) posted a comment naming at least one candidate in three or more subreddits.

This is also true at the party level. Nearly three-quarters (72%) of these highly engaged commenters named candidates from both the Republican and Democratic parties, compared with only about a quarter (26%) of all users in our analysis. 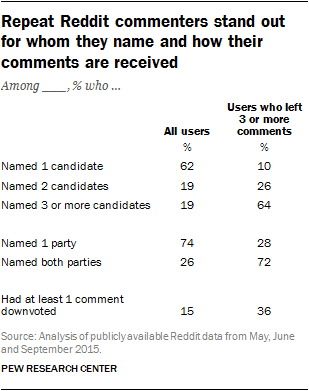 Data on upvoting and downvoting behavior reinforce the notion that repeat commenters operate differently on Reddit than do one-time commenters.

Overall, 15% of authors had one or more comments naming a presidential candidate voted down. However, among repeat commenters, that jumps to nearly four-in-ten (36%). This could be because such commenters are more passionate on the subject and thus more likely to inspire a reaction, or it may more simply be that posting multiple times presents more opportunities to have a comment voted down.

Next: Acknowledgments
← Prev Page
Page1Page2Page3Page4Page5You are reading page6Page7Page8Page9Page10
Next Page →

Seven-in-Ten Reddit Users Get News on the Site 1. Reddit news users more likely to be male, young and digital in their news preferences 2. Discussion mentioning the 2016 presidential candidates was vigorous in run-up to primaries, but did not dominate Reddit 3. In discussions about presidential candidates, Sanders mentioned far more than others 4. Discussion in Reddit circles more likely to focus on one candidate and one party
5. Heavy commenting activity concentrated among a minority of users
Repeat commenters more likely to discuss multiple candidates and parties – and to be downvoted
Acknowledgments Methodology Appendix A: Terminology Appendix B: Detailed tables