A question that arises with any social media discussion forum is the extent to which users and the messages they post venture beyond their own worldview or remain in their own silos of news and information. The data here do not offer a definitive answer on how this dynamic plays out on Reddit, but we can analyze the dynamic around comments mentioning candidates. The data here show that most comments – and even comments within a full discussion thread – generally narrow in on one candidate or party.

Across the 350,000 comments studied, the vast majority mentioned just one candidate by name. Of all comments mentioning a candidate, about eight-in-ten (82%) name just one, while 14% name two and 4% mention three or more candidates.

Looking at the data another way suggests that at the broader level, an only slightly more inclusive discussion is occurring. In addition to examining multi-candidate mentions at the comment level, researchers also looked at the post level. Within the 373 subreddits where candidates were mentioned most often, more than 67,000 posts contained at least one comment naming a candidate. These posts, many containing hundreds or thousands of comments, can contain a lengthy conversation about politics and the campaign. 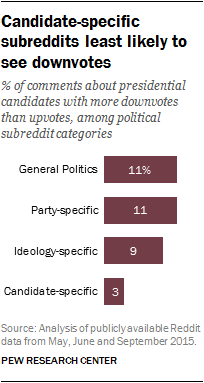 Within the Reddit community, “upvotes” and “downvotes” are features users can employ to express approval or disapproval of a particular comment. Comments can be downvoted because people disliked them, or because they are off-topic, irrelevant or out of step with the rules of conversation.

Of all the comments on Reddit during the time period studied – both those naming candidates and those not – fully 91% had a positive score. Just 5% of comments had negative scores, and 5% had a zero score, indicating either that the comment had received no votes or that there were roughly equal numbers of up and downvotes. Thus in general, downvoted comments are the exception rather than the norm.

This finding holds true for comments mentioning a presidential candidate. Across all of these comments in the three months studied, 11% were downvoted. Candidate-specific subreddits were especially unlikely to see downvoted comments – just 3% in all, compared with 11% of those in general political subreddits and of those in party-oriented threads. This could indicate that subreddits focused on a particular candidate attract a pretty supportive mix of users. What complicates this, though, is the control moderators of subreddits have over the rules about what is acceptable to post. Moderators could, for example, remove critical comments even before users have a chance to downvote them, or they could ban certain users altogether. Thus, it is unclear whether a low level of downvoting is tied to a naturally supportive user base or to a heavily controlled discussion arena.

Next: 5. Heavy commenting activity concentrated among a minority of users
← Prev Page
Page1Page2Page3Page4You are reading page5Page6Page7Page8Page9Page10
Next Page →

Seven-in-Ten Reddit Users Get News on the Site 1. Reddit news users more likely to be male, young and digital in their news preferences 2. Discussion mentioning the 2016 presidential candidates was vigorous in run-up to primaries, but did not dominate Reddit 3. In discussions about presidential candidates, Sanders mentioned far more than others
4. Discussion in Reddit circles more likely to focus on one candidate and one party
Candidates and partiesUpvotes and downvotes
5. Heavy commenting activity concentrated among a minority of users Acknowledgments Methodology Appendix A: Terminology Appendix B: Detailed tables