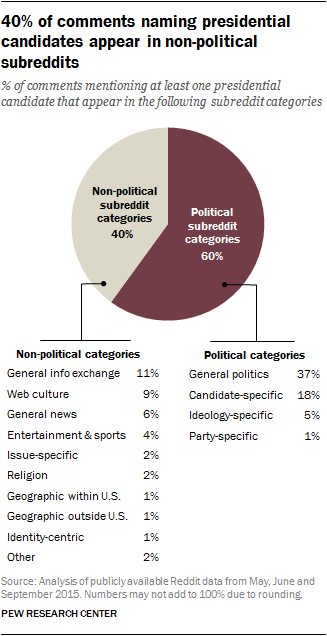 While conversation about the 2016 presidential candidates on Reddit was robust in the summer and early fall of 2015, in the prelude to the primaries, it was one of many topics of conversation on the site competing for attention among its users.

During the three months studied – May, June and September of 2015, more than a year before the general election and five to nine months before the first caucuses and primaries – researchers identified more than 350,000 comments mentioning a presidential candidate.4

These amounted to less than 1% of the 165 million-plus comments left on Reddit during that time period, a reflection of the diverse discussion around both news and non-news items that occur on the site. Similarly, of the nearly 84,000 active subreddits – those with any comments at all during the three months studied – comments mentioning candidates appeared in just 6%, or roughly 5,000. In addition, the conversation was further concentrated within those roughly 5,000 subreddits. Fully 91% of these comments appeared in 373 subreddits, many of which also happened to be among the most popular subreddits on the site at the time. Fully 85% of these comments appeared within the top 500 most-trafficked subreddits.

To gain a better sense of the kinds of subreddits included in these 373, researchers categorized them into 14 different topical categories: four that are clearly political in nature and 10 that are not. The total number of subreddits that fall into each of these categories varies considerably. Only comments falling into these 373 subreddits were included in the analysis that follows.

Here, as might be expected, the majority of comments (60%) appeared in political subreddits, especially those focused on general politics (37%).

A smaller, but still sizable, share (40%) of comments appeared in non-political subreddits such as information exchange (11%) and web culture (9%). More than 4,000 of these comments naming candidates, for example, appeared in a subreddit called /r/atheism over the course of the three months studied. About 800 appeared in one called /r/LateShow and nearly 700 in /r/forwardsfromgrandma.

In a broad social platform, one would not expect the candidate discussion to dominate the entire site, and the small slice of conversation devoted directly to the presidential candidates is not even that far out of sync with more mainstream media. For example, in 2011 – the last pre-election year – a Pew Research Center content analysis found that the 2012 presidential campaign accounted for 9% of the entire mainstream news agenda for the whole year.

Nonetheless, where the discussion did take off, it could dominate. The /r/politics subreddit is one of the top 20 forums on the site,5 and it hosted about 26,000 posts and a million comments in the three months studied. This analysis identified about 9,000 posts on /r/politics where at least one comment named a presidential candidate – fully a third of all posts made in the period.

Conversely, in /r/news – the most visible setting for discussion of current events on Reddit – the 12,000-plus comments naming a candidate represented less than 1% of all /r/news comments posted during the three months.6 While there may well have been other conversations about the campaign – in looking at the September /r/news posts with the most comments overall, not just those naming a candidate – election-related posts would not appear in the top 10. Instead, this candidate-driven discussion was overshadowed by topics such as Kim Davis, the county clerk who refused to issue marriage license to gay couples – a subject that accounted for three of the top 10 posts.

Next: 3. In discussions about presidential candidates, Sanders mentioned far more than others
← Prev Page
Page1Page2You are reading page3Page4Page5Page6Page7Page8Page9Page10
Next Page →

Seven-in-Ten Reddit Users Get News on the Site 1. Reddit news users more likely to be male, young and digital in their news preferences
2. Discussion mentioning the 2016 presidential candidates was vigorous in run-up to primaries, but did not dominate Reddit
3. In discussions about presidential candidates, Sanders mentioned far more than others 4. Discussion in Reddit circles more likely to focus on one candidate and one party 5. Heavy commenting activity concentrated among a minority of users Acknowledgments Methodology Appendix A: Terminology Appendix B: Detailed tables