In order to understand the language and ideas used by supporters and opponents of same-sex marriage, Pew Research tracked the presence of specific arguments in news stories and commentary.

Supporters largely framed the issue as a question of civil rights and equality. In the main news media studied, nearly half (49%) of the stories on the subject included someone making that case.

The New York Times described one such instance in their summary of the hearings. Theodore Olson, a lawyer representing two couples challenging California’s prohibition on same-sex marriage, told the Court, "It [California’s law] walls off gays and lesbians from marriage, the most important relation in life…thus stigmatizing a class of Californians based upon their status and labeling their most cherished relationships as second-rate, different, unequal and not O.K.”

The notion that polls have been moving in favor of same-sex marriage for sometime was also quite common, with 22% of the stories including statements discussing that trend.

The arguments against same-sex marriage were more diffuse. The most common was the idea that same-sex marriage was bad for traditional marriage and society. Close to one-in-five (18%) of the stories included this argument – one that the opposition lawyers delivered in court. Both the argument that homosexuality is immoral and that the government should not impose a "new" definition of marriage to allow same-sex couples to marry appeared in 10% of the stories.

As Rev. William Owens of Memphis explained in a March 22 USA Today article, "I go from a Biblical standpoint and a social standpoint, knowing the damage that has already been done to the black family." The threat of same-sex marriage, he added, represents "another nail in the coffin for black families."

One common legal argument, present in 17% of all the same-sex marriage stories, was the idea that the Supreme Court should not have taken the case, and that the issue should be left up to the states. In most of the cases when this argument appeared, it was expressed as an explicit legal question that did not speak to a view for or against the measure itself. Samuel Alito was widely quoted during the hearings regarding the lack of historical information. "You want us to step in and render a decision based on an assessment of the effects of this institution, which is newer than cell phones or the Internet?" Alito asked. "I mean we…do not have the ability to see the future." 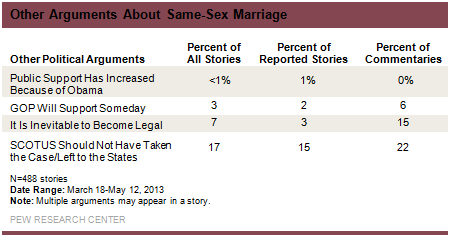 In a few instances, however, the argument was made by an opponent of same-sex marriage. Charles Cooper, the attorney who defended California’s ban on same-sex marriages, argued that the Court should not act because individual states need time to wrestle with the country’s changing attitudes. As a March 26 Wall Street Journal blog post described, "While some opponents of gay marriage are determined not to see the practice adopted anywhere, Mr. Cooper took a different road, suggesting that California voters simply were looking to hit a ‘pause button’ when they saw marriage laws changing too quickly. Mr. Cooper begged the justices to give states time to deal with what he called an ‘agonizingly difficult issue.’"

Despite the widespread notion among citizens that the legalization of same-sex marriage is inevitable, that argument was not included widely in the news coverage. A Pew Research May 2013 poll of the public, however, showed that 72% of Americans saw legal recognition of same-sex marriage as inevitable, including 85% of those who are in favor and 59% who are opposed. Yet, only 7% of the stories included this idea.

Next: What News Coverage Focused On
← Prev Page
Page1Page2You are reading page3Page4Page5Page6Page7Page8Page9Page10
Next Page →