Of all the stories about same-sex marriage that appeared in the main news media universe studied, one-fifth (21%) of them included someone who was clearly identified as a member of the LGBT community.

The LGBT individuals who appeared in the most stories on same-sex marriage were Edith Windsor, the 83-year-old plaintiff in the Supreme Court case, and Thea Spyer, Windsor’s deceased wife. The two filed suit because Windsor was forced to pay $363,000 in federal estate taxes on her inheritance from Spyer’s estate because the state of New York did not recognize their marriage.

An examination of the more specific mix of sources cited in the coverage (whether LGBT or not) shows a fairly wide mix. Roughly a quarter, 23%, of the stories featured a quote from at least one of the nine Supreme Court justices – most of which came from their questions and comments at the hearings. Justice Anthony Kennedy was the most quoted (14%), followed by Justice Elena Kagan (9%) and Justice Antonin Scalia (8%).

Kennedy is frequently a subject of discussion among Court watchers because he is often the swing vote on contentious topics. Certain memorable quotes, such as Kagan’s questioning of the argument that the state’s interest in marriage was to foster child-rearing, were cited frequently. "Suppose a state said that, because we think that the focus of marriage really should be on procreation, we are not going to give marriage licenses any more to any couples where both people are over the age of 55," Kagan suggested. "Would that be constitutional?" 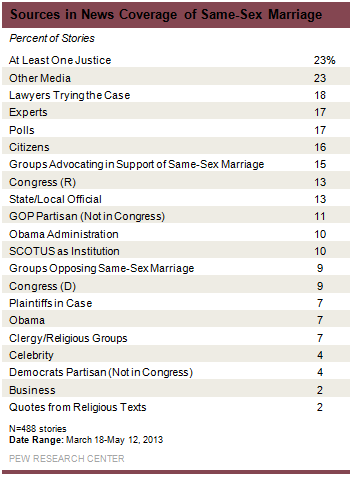 President Obama or a representative of his administration was a source in 13% of the stories. Most of that attention, however, came in the week prior to the March 25 Supreme Court hearings. Aside from the Obama administration, Republicans were quoted more often than Democrats, 19% versus 13% – though many of those quotes were from Republicans coming out in favor of same-sex marriage.

Next: Differences by Media
← Prev Page
Page5You are reading page6Page7Page8Page9Page10Page11Page12Page13Page14Page15
Next Page →