In anticipation of the Supreme Court hearings, the issue of same-sex marriage began to generate media attention. In the lead-up, most of the focus was on two components: announcements from public figures and the politics of the issue. Almost a third (29%) of the stories in the media (not including those from the Huffington Post or LGBT outlets) were of announcements. In particular, the decision by Republican Sen. Rob Portman to declare his support for same-sex marriage after learning his son is gay – the first Republican Senator to take such a position – and the endorsement from Hillary Clinton generated much of the media buzz.

That same week, 20% of the stories were about how same-sex marriage would play as a political issue, especially in relation to Clinton’s potential run at the White House and the impact on the Republican Party.

On Tuesday, March 26, and Wednesday, March 27, the Supreme Court heard two separate cases involving the legality of same-sex marriage. Those hearings led to a firestorm of coverage. Of all the stories examined in this study, 55% came during those five weekdays. 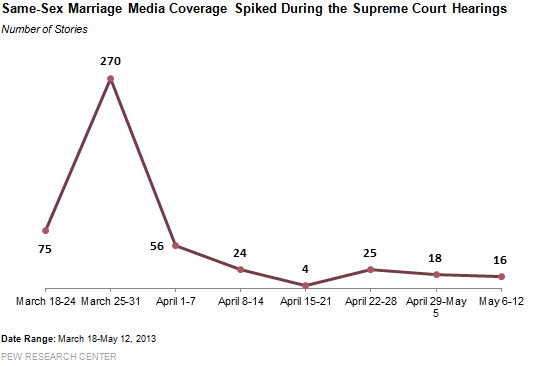 The stories during the week of the hearings were mostly neutral (55%), though supportive stories outweighed opposing ones (38% to 7%).

Many of the stories that week (41%) focused on the specifics of the court case and explained both sides of the arguments used by the lawyers before the court. Announcements by public figures (11%) and politics (10%) were the next two largest, but trailed by significant margins.

By the following week, coverage of the same-sex issue declined dramatically. With few new developments, the news media moved on to other topics. And by the time the bombings at the Boston Marathon occurred on April 15, the issue disappeared almost entirely.

By early May, the focus shifted from the Supreme Court hearing and national laws to happenings on a state level. During this entire stretch, the largest component was on state and local laws (28%), as both Rhode Island and Delaware legalized same-sex marriage during the first seven days of May. Announcements by public figures (26%) and politics (18%) were the other major topics covered.

Even though there were fewer stories on the topic during this period, the tone was even more supportive. From March 30 to May 12, fully 58% of the stories were in favor, compared with 10% opposed and 32% neutral – a ratio of almost 6-to-1.

Next: Voices Heard in the Coverage
← Prev Page
Page1Page2Page3Page4You are reading page5Page6Page7Page8Page9Page10
Next Page →