Researchers also examined the focus of the same-sex marriage debate in each story. Here, the largest category involved the specifics of the Supreme Court cases and arguments during the hearings. One quarter (25%) of the stories were on that topic, most of which occurred during the week of the Supreme Court proceedings. And while there were more stories filled with supportive statements of same-sex marriage (25%) than opposing ones (8%), the majority of such coverage was mixed or neutral (67%), laying out the arguments from both sides often with direct quotes from the justices and lawyers. 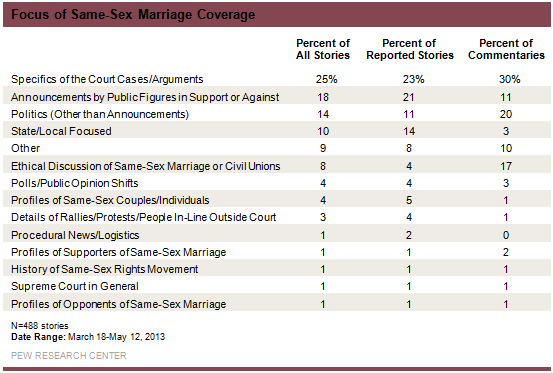 The next largest subject – 18% of the stories – involved announcements by public figures, most of the time stating support for the measure. According to Yahoo News, ten Democratic Senators, plus Sen. Portman and former Secretary of State Hillary Clinton, came out in favor of same-sex marriage during the first quarter of 2013. Those stories tended to relay the statements of support without bringing in voices from the other side. Of all the stories focused on these types of declarations, 67% were largely supportive of same-sex marriage, while 12% were opposed and 20% were neutral.

A March 25 post on the New York Times blog, The Caucus, for example, explained why Sen. Portman decided to support same-sex marriage and why he delayed the announcement. The story also quoted Sen. McCaskill’s reasons for coming out in support, but there were no quotes from any individuals who opposed same-sex marriage.

The third most-discussed subject, at 14%, involved the politics of the issue (other than public figures announcing their positions). These articles were more common among opinion-focused pieces (20%) than for reported stories (11%). And nearly half (48%) of the stories that focused on politics favored same-sex marriage, while only 12% opposed and 41% were neutral.

Some of the political discussion emphasized the Republican Party’s stance on the issue. On the March 25 edition on MSNBC’s PoliticsNation, for example, NBC’s Mark Murray discussed how the GOP was slightly shifting their stance. "It’s not a question of polling," he stated. "It’s a question of progress and it’s a question of how younger Americans feel about this issue versus older Americans, and we`re starting to hear Republicans…use different language around this issue. And that is why we know Republicans are changing."

One area to receive little attention in the media, just 8% of the stories, was the morality or ethics of same-sex marriage. Most of these were commentary pieces voicing support for the measure.

Next: Chronology
← Prev Page
Page1Page2Page3You are reading page4Page5Page6Page7Page8Page9Page10
Next Page →