The digital native Huffington Post site produced far more content than any other media outlet studied. The Google searches, conducted every other day from March 18 to May 12, generated 365 different stories over the eight-week period. That compares to 153 newspapers stories in the rotating sample across the same eight-week period. On March 27 alone, the second day of the Supreme Court hearings, the Huffington Post produced 77 separate pieces on the subject.

Most of the Huffington Post coverage appeared on a dedicated page, Gay Voices, launched in October 2011 to "cover the complexities of the LGBT community, from family and faith to politics and sexuality."  The Gay Voices page contains a lead story, a collection of recent blog posts, roughly three dozen unique stories from staff, newswires, or other news outlets on its center and right columns, and links to 25 individual LGBT-focused blogs. Blog content on the site itself is produced by Huffington Post staff, celebrities, advocacy groups, authors, experts in professional fields, and everyday citizens who may or may not identify as LGBT individuals themselves.

The strong support for same-sex marriage on the Huffington Post stood out even more than the main news universe studied. Fully 62% of the site’s stories were supportive, compared with 7% that were opposing and 31% that were neutral or mixed. 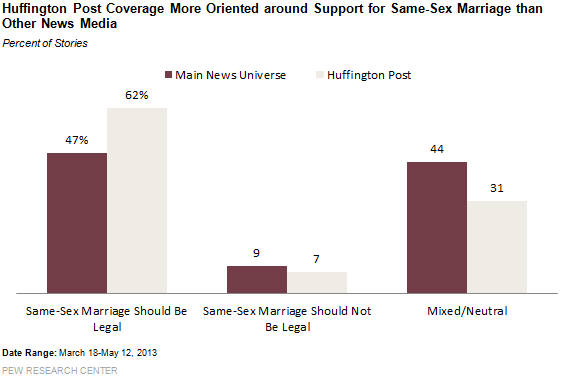 Huffington Post stories also more often included people identified as a part of the LGBT community (31%) than in the other news media studied (21%). 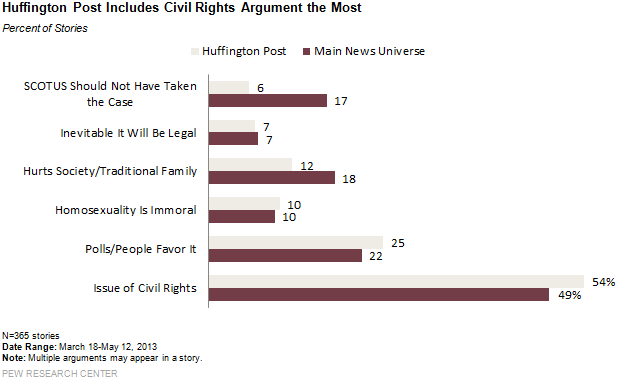 On the Huffington Post, as with the main news universe, the civil rights argument was the most popular (54%), followed by the notion that polls and public opinion were moving in the direction of support (25%). On March 29, for example, swimmer and journalist Diana Nyad wrote a guest blog declaring that same-sex marriage is "the civil rights issue of our time." "As a human rights issue, same-sex marriage is an emblem of crucial, individual entitlement to the pursuit of happiness," she wrote.

The aspects of the story covered on Huffington Post, though, did differ from the main news universe in one major way. The Huffington Post included far more stories featuring a discussion of the ethics of same-sex marriage, the vast majority of which were in favor. 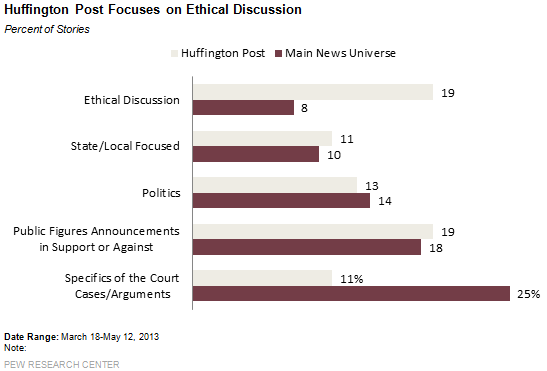 Opposition to same-sex marriage was rare on the site, but was most found primarily in reported pieces. On April 8, for example, a story on the Religion section of the Huffington Post quoted senior Mormon apostle Boyd K. Packer as warning against "the weakening of the laws of the land." "Tolerance is a virtue, but, like all virtues, when exaggerated it transforms itself into a vice…We need to be careful of the ‘tolerance trap’ so that we are not swallowed up in it," he said.