In its entirety, the reaction on Twitter was more closely aligned with public opinion than with the news media, Huffington Post or LGBT outlets. Pew Research used software from Crimson Hexagon to track the tone and volume regarding the same-sex marriage issue on Twitter.

During the eight weeks studied, the conversation was almost equally divided between support and opposition (31% versus 28%) – along with a solid portion (42%) that was neutral or more evenly mixed. This ratio is close to recent polls of the public which showed that 51% of Americans support same-sex marriage, compared to 42% that opposed. 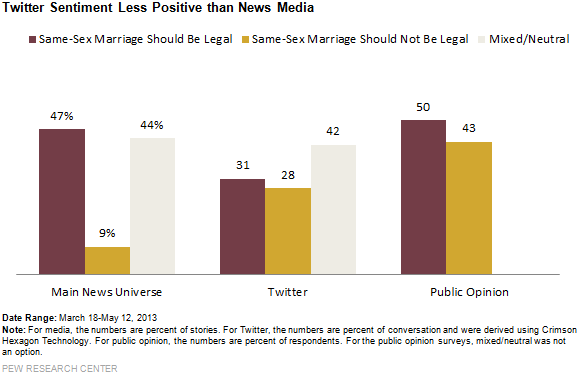 However, looking at the Twitter opinions on a week-by-week basis reveals a more nuanced story with large swings of opinion. During the week of the Supreme Court hearings, when the largest amount of Twitter posts on the subject occurred (48% with roughly 1.2 million tweets), statements favoring the measure slightly outweighed those opposed (23% to 18%).

From April 1 to April 14, opinion on Twitter shifted dramatically in the direction of opposing same-sex marriage. For those two weeks, 55% of the conversation was opposed, while 32% was in favor and 13% was neutral. 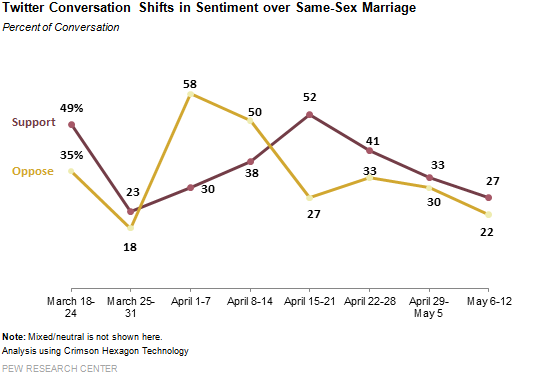 Another shift occurred starting April 15. From that date through the next four weeks, statements in support outnumbered those in opposition, 43% to 26% with 30% neutral – though no single event seemed to drive the shift.

The content of tweets in support of same-sex marriage ranged from politically-focused opinions to personal expressions. Some were addressed to specific laws and politicians, such as a tweet by @QueerSpring2013, "@CoryBooker get @GovChristie to sign marriage equality in NJ because #LGBT Americans are born with right to unalienable rights" or this by @LogoTV, "United GAY-tions Alert! Rhode Island passes marriage equality! It’s a small state, but we’re not size queens."

Some addressed personal feelings like that from @beelynmcdizzle, "Gay and lesbian people deserve the exact same rights as straight people! At the end of the day we’re all human I just don’t see the problem."

Tweets expressing opposition to same-sex marriage also varied in focus-from politics to religion to the more personal. Many noted their personal religious and ethical beliefs, such as this tweet from @_carmensitaaa, "so someone put on fb yesterday ‘Gay is NOT from GOD. Same sex Marriage is made up by satan. GOD establish Man & Women marriage," or this one from @Atlantis0712, "@speak_forth gay marriage is a crime against human rights."