Not only were the various sides in the same-sex debate arguing over the ethical and legal merits, but even the words used to describe the institution have become contentious. Many supporters of same-sex marriage, for example, preferred the use of the term "marriage equality" because it incorporates the idea of equal rights into the label.

A comparison between the terms used by individuals as they search the web and those used by journalists shows a noticeable difference. The general public has used the term "gay marriage" most often while journalists have preferred "same-sex marriage." 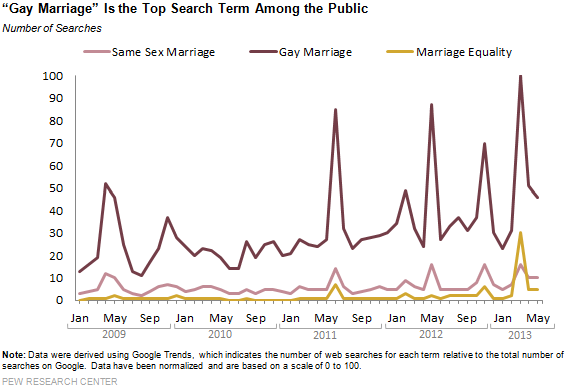 One proxy for understanding the language used by members of the general public is to track search terms using Google Trends. Over the past five years, the term "gay marriage" was far more popular than "same-sex marriage." And for most of that time, the term "marriage equality" was hardly searched for at all.

However, those who advocate for the term "marriage equality" achieved a small victory during March 2013 – the month of the hearings – when, for the first and only time, that term was used in more searches than "same-sex marriage."

For journalists, the language was different. Since 2009, a search of 24 of the most read American newspapers demonstrated that the term "same-sex marriage" was the phrase of choice.[1] On average, "same-sex marriage" appeared in these papers slightly more than 1,000 times per quarter. "Gay marriage," on the other hand, appeared two-thirds as often, slightly less than 700 times per quarter.

"Marriage equality," however, was not nearly as common. Through the first quarter of 2011, that term was used only an average of about 70 times per quarter. After that point, the usage increased to about 200 times per quarter, a number still much smaller than the other two phrases. 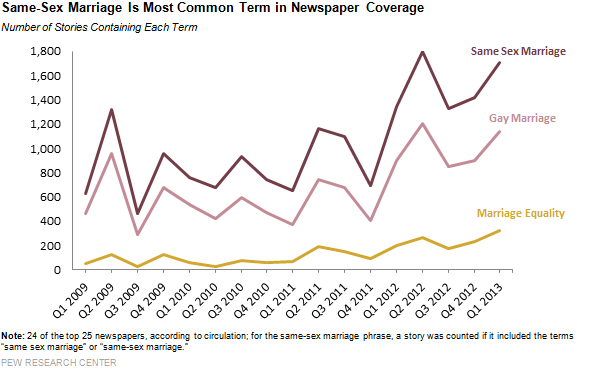 [1] The Wall Street Journal was not included in this search because its content is not available on LexisNexis.

Next: Methodology
← Prev Page
Page5Page6Page7Page8Page9Page10You are reading page11Page12Page13Page14Page15
Next Page →