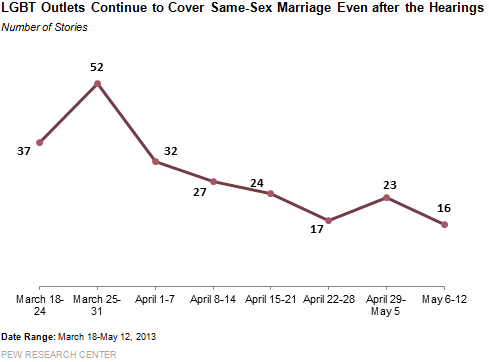 One major difference was the sustained nature of the coverage, especially when compared to the rest of the news media. While 55% of all the news media stories about same-sex marriage in this sample were published in the week of the hearings, only 23% of the stories in the LGBT outlets were.

The tone of the coverage was, not surprisingly, overwhelmingly supportive of same-sex marriage. Overall, 64% of the stories included twice as many supportive statements as opposing, compared to only 4% that had opposition statements outnumbering supporting by at least 2-to-1 (32% were neutral).

And the LGBT media differed significantly from other media in terms of the focus of the same-sex marriage debate. 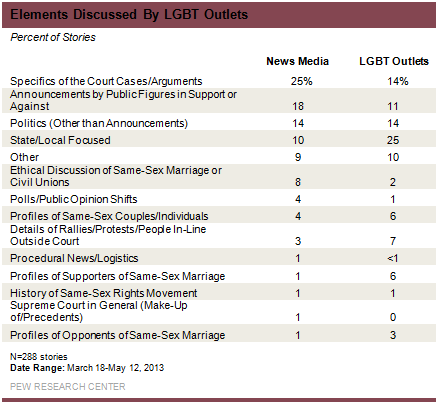 One quarter (25%) of the LGBT articles discussed developments in state and local jurisdictions pertaining to marriage legislation. Chicago’s Windy City Times, for example, had a March 27 front page story about the hearings at the Supreme Court, but also a lengthy report on page 8 about the upcoming vote in the Illinois State Legislature on same-sex marriage being pushed to April. The May 1 edition led with an interview with Illinois Gov. Pat Quinn about his support and the reasons for delays in the Legislature.

Two of the largest areas of focus for the rest of the media were less important in LGBT outlets – specifics of the Supreme Court case and announcements by public figures. While 25% of the stories in other outlets detailed the Supreme Court case, that was true of only 14% of stories in LGBT outlets. And 11% of the LGBT stories were on declarations by public figures compared with 18% in other outlets.

If the focus of the coverage was different, the arguments used were similar. By far, the most common argument was that same-sex marriage should be legal because it is an issue of civil rights and equality. In LGBT outlets, this idea appeared in 50% of articles, nearly identical to the 49% in other media.

For example, an April 1 story in Frontiers LA regarding California’s Prop 8 included a quote from California Attorney General Kamala Harris when she appeared on MSNBC. "I don’t think we can allow such a conversation as ‘a small step toward equality,’" she argued. "We either step toward equality or we don’t."

A front page story in the March 29 edition of the Philadelphia Gay News included a quote from one of the plaintiffs being represented in front of the Supreme Court. Kris Perry said, "In this country as children, we learn that there is a founding principle that all men and women are created equally. We want this founding principle."

The notion that polls and public opinion were in favor of same-sex marriage showed up in 18% of the LGBT stories, compared with 22% of the news media stories.

There were only eight stories in the LGBT sample that included more opposing statements. All were reported pieces that included quotes from opponents of same-sex marriage with little or no commentary. For example, the April 17 Windy City Times included a story quoting an email from Illinois State Rep. Tom Morrison that compared same-sex marriage to statutory rape. "If one male and one female is discriminatory, then isn’t limitation of marriage to just two people discriminatory, too?" Morrison wrote. "Could a man marry a consenting 9-year old girl? Why not? To refuse them would be discrimination. Again, where would you draw the line?"

Overall, much of the commentary around same-sex marriage included optimism, regardless of the outcome of the Supreme Court cases.

"No matter how the Supreme Court rules, it is clear that it’s no longer radical to believe gays and lesbians deserve full equality," wrote reporter Justin Snow in the April 4 edition of Washington, D.C.’s Metro Weekly.

Next: Reactions on Twitter
← Prev Page
Page5Page6Page7Page8You are reading page9Page10Page11Page12Page13Page14Page15
Next Page →