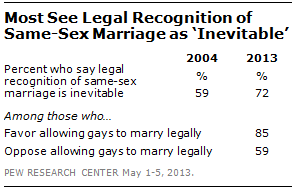 As support for gay marriage continues to increase, nearly three-quarters of Americans – 72% – say that legal recognition of same-sex marriage is “inevitable.” This includes 85% of gay marriage supporters, as well as 59% of its opponents.

The national survey by the Pew Research Center, conducted May 1-5 among 1,504 adults, finds that support for same-sex marriage continues to grow: For the first time in Pew Research Center polling, just over half (51%) of Americans favor allowing gays and lesbians to marry legally. Yet the issue remains divisive, with 42% saying they oppose legalizing gay marriage. Opposition to gay marriage – and to societal acceptance of homosexuality more generally – is rooted in religious attitudes, such as the belief that engaging in homosexual behavior is a sin.

Part of this is a matter of who is more likely to have many gay acquaintances: the young, city dwellers, women, and the less religious, for example. But even taking these factors into account, the relationship between personal experiences and acceptance of homosexuality is a strong one.

Yet opposition to gay marriage remains substantial, and religious beliefs are a major factor in opposition. Just under half of Americans (45%) say they think engaging in homosexual behavior is a sin, while an equal number says it is not. Those who believe homosexual behavior is a sin overwhelmingly oppose gay marriage. Similarly, those who say they personally feel there is a lot of conflict between their religious beliefs and homosexuality (35% of the public) are staunchly opposed to same-sex marriage. 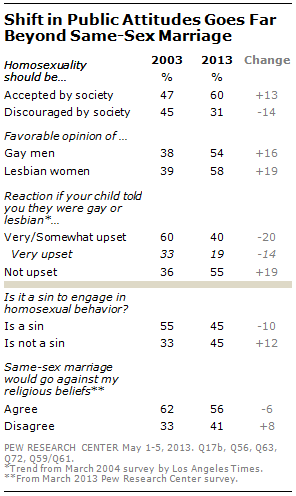 Favorable opinions of both gay men and lesbians have risen since 2003. Moreover, by nearly two-to-one (60% to 31%), more Americans say that homosexuality should be accepted rather than discouraged by society. A decade ago, opinions about societal acceptance of homosexuality were evenly divided (47% accepted, 45% discouraged).

Despite the increasing support for legal same-sex marriage in recent years, opinions about the issue remain deeply divided by age, partisanship and religious affiliation.

By contrast, large majorities across most demographic groups think that legal recognition of same-sex marriage is inevitable.

Republicans (73%) are as likely as Democrats (72%) or independents (74%) to view legal recognition for gay marriage as inevitable. Just 31% of Republicans favor allowing gays and lesbians to marry legally, compared with majorities of Democrats (59%) and independents (58%).

Just 22% of white evangelical Protestants favor same-sex marriage, but about three times that percentage (70%) thinks legal recognition for gay marriage is inevitable. Among other religious groups, there are smaller differences in underlying opinions about gay marriage and views of whether it is inevitable.

Next: Section 1: Same-Sex Marriage, Civil Unions and Inevitability
← Prev Page
You are reading page1Page2Page3Page4Page5
Next Page →