While the oil spill was a dominant story in the mainstream media for a much of the spring and summer, it was not as hot a topic in social media during the first 100 days of the saga.

According to PEJ’s News Coverage Index and its New Media Index, the spill was one of the top three stories in the mainstream press in each of the 14 full weeks included in this study, spending nine of those weeks as the No. 1 story. In contrast, however, the subject made the list of top five stories in the blogosphere in five weeks, and was the top story only once. On Twitter, the spill was among the top five most Tweeted topics twice during those 14 weeks. And videos about the spill made the list of most viewed news videos on YouTube three times. 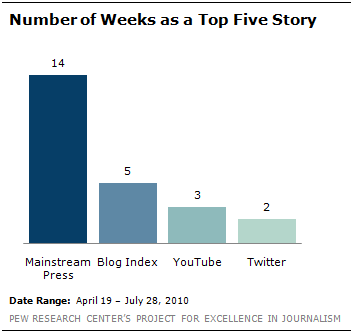 If there was less interest, one clear theme seemed to permeate the social media commentary.  It was that of a lack of confidence and trust in the capacity and intentions of both public and private institutions—including the federal government, BP and the mainstream media.

The Obama Administration’s response provided fodder for critics on the both the left and right. Commentators in the social media held BP in even lower regard as bloggers treated the company’s efforts with skepticism. Finally, the mainstream press was also a target in the social media. After one blogger unearthed the use of doctored photographs released by BP, bloggers congratulated themselves for playing a fact-checking role once reserved for the mainstream press.

On blogs, the BP saga made the roster of top five stories for the first time in the week of May 3 to 7, when it was No 2.  One catalyst was a Washington Post piece by Dana Milbank that detailed “gulf-state conservatives’ newfound respect for the powers and purse of the federal government.”  Liberal bloggers applauded Milbank for exposing hypocrisy, with Bob Cesca suggesting that “Republican lawmakers are quickly stashing their ‘Don’t Tread on Me’ banners and tea bag hats in the nearest closet and demanding that the federal government come to the rescue of the Gulf States.” Conservatives, like Stephen Bainbridge, criticized Milbank for using the spill to “score political points.”

The story next returned to prominence in the blogosphere during the week of June 7 to 11 when it began a run of three straight weeks on the roster of top stories. The placement of a containment cap on the broken wellhead led to an upsurge in coverage, with the spill finishing as the No. 4 subject. Many bloggers expressed doubts about BP’s effort, such as the warning from Udo Schuklenk at the Ethx Blog to “not trust a word BP is uttering.”

One week later, June 14 to18, it was the second-biggest subject on blogs, driven by the news that the government’s estimate of the flow rate of the spill had increased dramatically to as much as 60,000 barrels per day.  This development reinforced the blogosphere’s lack of trust in both the government and BP.

The spill also cracked the top five stories on Twitter that same week, ranking as No. 3. Many tweets echoed the frustration in the blogosphere. In addition to criticism of BP, Dave Morin’s June 17 tweet demonstrated a general lack of confidence in the cleanup effort: “This (the oil spill) is such an epic tragedy. The saddest part of which is that no one knows how to help.”

The week of June 21 to 25, the spill ranked as the No. 3 story on blogs. Bloggers reacted to word that beleaguered BP CEO Tony Hayward, who had famously declared that “I’d like my life back,” had spent a day watching his yacht race around the Isle of Wight.

David Rothman of The Solomon Scandals posted satirical diary entries ascribed to Hayward, including pleas that Americans “get a life¬-and let me enjoy my own!”

The next time the spill showed up as a top story in Twitter was July 12 to16, when it was the No. 2 story. The precipitating event was the apparently successful sealing of the leaking well with a new containment cap as Twitter was used to spread the news. The Huffington Post tweeted on July 15: “Oil Spill STOPPED For First Time In 3 Months Says BP.” But along with relief, many Twitter users reaffirmed their concern either with the permanence of the seal or the remaining damage to the Gulf. TeenThings remained critical of BP despite the good news: “April: Oil spill starts. May: Still spilling. June: Still going. July: BP finally thinks of stopping it with a cap. BRILLIANT!”

The final week of significant attention to the spill story on blogs was July 19 to 23, when it was the No. 1 subject. That stemmed in large part from the role blogger John Aravosis played in exposing the manipulation of photographs by BP to make its crisis center look busier than it was. Many commentators focused on bloggers performing a fact-checking role.

“A great example of how a blogger spotted something that traditional media failed to notice,” declared Steve Safran at Lost Remote.

On the video sharing site YouTube, the spill gained traction in three different weeks, first generating interest early May. The top five news videos that week included a report from Al Jazeera about options for containing the spill and a clip featuring oil burning near the site of the Deepwater Horizon rig explosion.

The story re-surfaced on YouTube from June 26 to July 2 when a local activist posted a clip of what he claimed was oily residue on the ground in Louisiana as a result of the oil spill. The video attracted more than 750,000 views and the criticism of a National Weather Service official who questioned whether the substance in the clip was due to the spill.

Then from July 3 to 9, the top-ranked video was a clip of CNN’s Anderson Cooper, who reported extensively from the Gulf region, criticizing federal government rules limiting media access to some cleanup sites.

This type of coverage, migrating from the mainstream press to the social media, may have reinforced the views of a blogosphere already quite skeptical about the role of the government—as well as the other key players—in the massive oil disaster.

Next: Using the web to try to tell a complex story
← Prev Page
Page1Page2Page3Page4Page5Page6You are reading page7Page8Page9Page10Page11
Next Page →

100 Days of Gushing Oil – Media Analysis and Quiz A different kind of disaster story The breaking news never went away BP fared worse than the Obama White House If BP was the bad guy, no protagonist emerged The spill was a TV story, but different on cable vs. network
In social media, less attention but lots of skepticism
Using the web to try to tell a complex story The public was fascinated About this Report Topline