For many major news events, coverage seems to follow a fairly typical pattern—an initial burst of event-driven attention followed by post-mortems, commentary and an increasing focus on a political or Beltway angle. That wasn’t the case with the Gulf of Mexico oil spill. 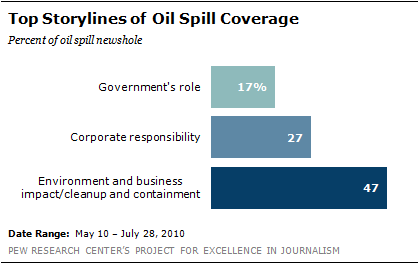 One of the characteristics that made the BP saga unusual was that the event-driven news coverage—the breaking news aspect of the disaster—never went away.  That storyline, which included the ongoing efforts to cap and clean up the flow of oil and the environmental and commercial damage caused, kept evolving, requiring constant attention and effectively keeping the story from simply defaulting to a more partisan or politicized story line.

In evaluating how the media handled the spill, PEJ broke the coverage down into key storylines beginning on May 10, at the start of the saga’s fourth week. A qualitative examination of the first three weeks of coverage—from April 20 to May 9—finds that it focused on the explosion itself and the missing workers the first week. In the second week, the media began assessing the size of the spill and looking at the culpability of BP and the government. In the third week, the narrative began shifting to the environmental and economic impacts of the disaster.

Thereafter, from May 10 to July 28, the top oil spill storyline involved events in the Gulf itself—the environmental and economic impact of the spill, the efforts to cap the leak and the cleanup of the oil that already escaped. Together, these three subjects, often intermingled, made up nearly half (47%) of the coverage of the crisis. Coverage of events from the scene also represented the lead storyline in nine weeks studied.

The June 11 Los Angeles Times, for example, published a report on new estimates from the U.S. Geological Survey that “as many as 40,000 barrels of oil have been flowing daily from the blown-out BP well…greatly expanding the scope of what is already the largest spill in U.S.…The earliest figure, 1,000 barrels per day, was supplanted by 5,000 barrels. A government-appointed scientific team then pegged the flow at 12,000 to 19,000 barrels.”

A month later, a story on the July 13 broadcast of ABC’s World News Tonight looked at some of the human costs of the spill by traveling with hard-hit local fishermen. Anchor Diane Sawyer introduced viewers to one such man who “in ordinary times…could bring back hundreds of pounds of oysters. Yesterday, there were just two living ones.”

Smaller but still significant storylines included the examination of energy company BP’s role and responsibility in the disaster, at 27%.

Some of this coverage was fueled by the discovery of evidence, often from BP documents, that the company had ignored warnings about the rig.

“Several days before the explosion on the Deepwater Horizon oil rig, BP officials chose, partly for financial reasons, to use a type of casing on the well that the company knew was the riskier of two options.” a May 26 New York Times story based on a BP document reported.

The third biggest angle of the oil spill coverage, 17%, examined the government’s role and behavior during the crisis—with much of the focus on the Obama White House.

On the June 16 broadcast of the PBS NewsHour, for example, several panelists offered less-than- flattering reviews of the president’s June 15 Oval Office address to the nation on the environmental disaster.

“I was a little bit concerned about last night,” offered former George Bush speechwriter Michael Gerson.  “Last night, the president seemed much more passive, much more input oriented,” than some of his predecessors who had used the Oval Office setting to announce major initiatives.

This also was a story that provided three major storylines emanating from three distinct locales. One was in Washington, where the federal government was trying to get on top of the situation and prevent the crisis from becoming another partisan battleground. Another was in London, the corporate headquarters of BP, the energy giant at the center of the disaster that was scrambling to protect its reputation and its bottom line.

But the dominant storyline occurred in the Gulf of Mexico, where the struggle to stop the spill and the impact on the local region were ongoing events. And that’s a major reason why the spill coverage didn’t simply become another story in which politics and commentary took over.

100 Days of Gushing Oil – Media Analysis and Quiz A different kind of disaster story
The breaking news never went away
BP fared worse than the Obama White House If BP was the bad guy, no protagonist emerged The spill was a TV story, but different on cable vs. network In social media, less attention but lots of skepticism Using the web to try to tell a complex story The public was fascinated About this Report Topline