The disaster in the Gulf has been neither a print media story like the economy—where newspapers have devoted the most attention—nor a talk show story like health care, where radio and cable talkers dominated. 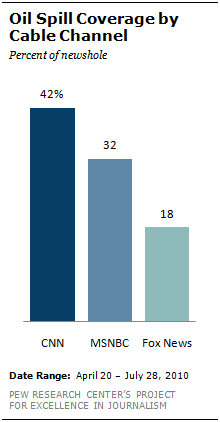 Instead it has been a TV story, with cable news (31% of the airtime studied) and network news (29%) devoting the most time to the subject. But the two television platforms took significantly different approaches to the story.  Network television focused largely on the disaster itself, with the strong visuals it provides. Fully 64% of the network airtime was devoted to the cleanup, containment and impact storyline, by far the most of any sector.

The overall cable coverage was more mixed, but one key focus was the blame game. Fully 45% of the cable coverage was devoted to examining the government’s role and BP’s role. That represented considerably more coverage than broadcast network news gave to those storylines (28%).
And when it came to cable news coverage, the three major news networks took different approaches, with CNN’s focus markedly different than its competitors.

For one thing, CNN spent the most time on the spill story. From April 20 to July 28, nearly half (42%) of the CNN airtime studied was devoted to the subject. That compares with about one-third (32%) on MSNBC and about one-fifth (18%) on Fox.  And no one on CNN gave more attention to what was happening in the region than Anderson Cooper, who has gained a reputation as a disaster-scene reporter in locales ranging from hurricane-ravaged New Orleans to earthquake-battered Haiti.

On his June 29 show for example, Cooper reported from the Audubon Aquatic Center outside New Orleans where about 100 oil-soaked sea turtles were being cared for.  He interviewed medical personnel and watched as they gave one of the recently arrived animals an injection of antibiotics, which along with vitamins and mayonnaise (which apparently helps rid the turtles’ systems of oil), constitutes the main form of treatment.

By contrast, 39% of the MSNBC airtime studied featured the containment, cleanup and impact coverage. And the network, with its liberal prime-time talk hosts, devoted 22% of its coverage to the government storyline and spent more time than either of its rivals on the BP/corporate storyline (31%).

The harsh light shone on BP was apparent in MSNBC host Keith Olbermann’s assertion on his June 21 show that there was evidence of “the most damning missed warning sign [by BP] yet, weeks before the disaster in the Gulf…a leak in the blowout preventer on Deepwater Horizon unfixed just weeks before BP’s cataclysm.” He then accused the company of “lying” in its earlier estimates of the amount of oil spilling from the leak.

The Fox News Channel—where conservative prime-time hosts dominate—devoted the least time to the breaking news aspect of the story (36%) and the corporate angle (17%). Instead it easily spent the most time on the government storyline (39%), and a good deal of that was critical.
On his June 7 show, Fox host Sean Hannity, noting that it was “Day 49 of the Gulf Coast disaster,” criticized the president for spending his time welcoming athletes and performers to the White House in recent weeks.

“It seems that no matter how bad this spill gets, the president just can’t seem to forego any type of recreation,” Hannity said.

In broadcast network news—where the commercial networks tend to be much more in sync on news judgment than their cable cousins—the big three spent virtually the same amount of time on the saga. Nearly one-third (32%) of the airtime studied on NBC was devoted to the spill, followed closely by 31% on CBS and 29% on ABC. The PBS NewsHour devoted the least time, 21%, to the story.  In addition, all the networks devoted by far the most time, more than 50%, to the cleanup, containment and impact storyline.

A July 6 report on NBC was typical of the kind of on-scene coverage done by network news. It started with the news that oil had been found in Lake Pontchartrain near New Orleans. That was followed by a story about how roughly 1,400 landowners in the region, using federal funds, were trying to save migrating birds by “purposely flooding their fields…to keep [the birds] from reaching oily nesting grounds turned into killing fields.”

Various other media sectors focused on different aspects of the disaster. 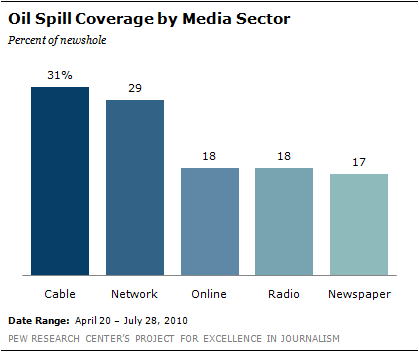 The newspapers examined in this study stood out for their attention to BP, devoting 31% of the front-page newshole to that topic, the most of any sector.

The online sector followed very closely behind newspapers when it came to BP-oriented coverage, devoting 30% of its newshole to that storyline.

And driven in part by the ideological talk hosts, radio devoted a higher percentage of its oil spill coverage (31%) to the government’s role than any other media sector.  Opinions varied widely about the performance of the Obama team.

Conservative Rush Limbaugh, for example, assailed Obama’s response to the crisis, saying he was “not serious about…actual governing and stewardship on this country.” Across the dial, liberal radio talker Ed Schultz went after Obama critics, asking “What do you want the president to do, swim down there and stick his fist in it…The president…does not run this country, the multinationals do.”

Next: In social media, less attention but lots of skepticism
← Prev Page
Page1Page2Page3Page4Page5You are reading page6Page7Page8Page9Page10Page11
Next Page →

100 Days of Gushing Oil – Media Analysis and Quiz A different kind of disaster story The breaking news never went away BP fared worse than the Obama White House If BP was the bad guy, no protagonist emerged
The spill was a TV story, but different on cable vs. network
In social media, less attention but lots of skepticism Using the web to try to tell a complex story The public was fascinated About this Report Topline