The massive oil spill in the Gulf of Mexico, which began with the Deepwater Horizon rig explosion on April 20 and continued to gush for another three months, posed a daunting set of challenges for the news media.

Unlike most catastrophes, which tend to break quickly and subside almost as fast, the spill was a slow-motion disaster that demanded constant vigilance and sustained reporting. 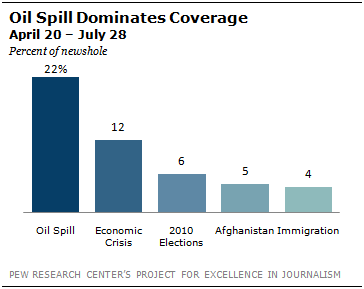 The story was also complex, dominated by three continuing and sometimes competing story lines from three different locales—the role of the London-based oil company, the efforts of the Obama Administration, and the events in the Gulf region—that taxed reportorial resources and journalistic attention spans.

Coverage of the disaster also required a significant amount of technical and scientific expertise. News consumers were introduced to a series of new terms and concepts as the media tried to explain the efforts to contain the spill and formulate reliable estimates of the extent of the environmental and economic damage.

The news media, in short, found themselves with a complicated, technical and long-running disaster saga that did not break down along predictable political and ideological lines. And they were reporting to an American public that displayed a ravenous appetite for the spill story.
How did the press handle the challenge?
A new study of media coverage of the oil spill disaster by the Pew Research Center’s Project for Excellence in Journalism finds that, given the tough task they faced, the media as a whole seemed to rise to the occasion.

News organizations displayed real staying power as events continued to unfold. They spent considerable time reporting from the Gulf and humanizing the crisis. They largely avoided the temptation to turn the disaster into a full-blown political finger-pointing story. And in many cases they used their websites’ interactive features to illuminate aspects of the story that would have been harder to digest in print or broadcast formats.

In short, a news industry coping with depleted staffing, decreasing revenues and shrinking ambition was tested by the oil spill and seemed to pass.
To evaluate that coverage, PEJ studied approximately 2,866 stories about the oil spill produced from April 20 to July 28—from the day that the Deepwater Horizon oil rig exploded to the day after BP CEO Tony Hayward’s departure was announced.

The study finds eight essential points about how the media covered the disaster:

Next: A different kind of disaster story
← Prev Page
You are reading page1Page2Page3Page4Page5Page6Page7Page8Page9Page10
Next Page →

100 Days of Gushing Oil – Media Analysis and Quiz
Eight Things to Know About How the Media Covered the Gulf Disaster
A different kind of disaster story The breaking news never went away BP fared worse than the Obama White House If BP was the bad guy, no protagonist emerged The spill was a TV story, but different on cable vs. network In social media, less attention but lots of skepticism Using the web to try to tell a complex story The public was fascinated About this Report Topline