In the three and a half years that PEJ has been regularly tracking news coverage, most disasters have been covered as “one week wonders”—stories that generate a major burst of media attention and then quickly drop out of the headlines. 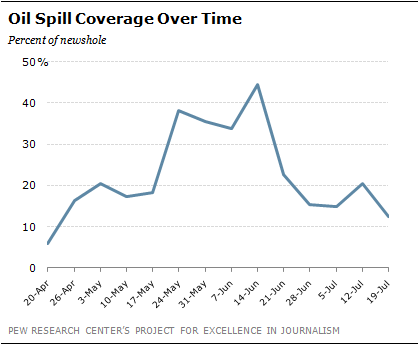 But the Gulf of Mexico oil spill was a slow-motion disaster that exceeded the usual media attention span, commanding substantial coverage week after week. From April 20 through July 28, the Gulf spill overwhelmed every other story in the mainstream media. It accounted for 22% of the newshole, almost twice as much coverage as the No. 2 story, the economy at 12%.

And its presence in the public eye was consistent. The Gulf saga registered as the No. 1 story in the mainstream news agenda in nine of those 14 weeks—and it never finished lower than No. 3. During four of those weeks, from May 24 to June 20, the disaster accounted for 38% of the newshole studied. That is an extraordinary run of coverage for any story, but particularly a disaster that required so many resources spread over so many locations.

The contrast to the media’s handling of other major disasters is striking.

In 2007, the massacre that left 33 people dead on the Virginia Tech campus was the biggest story in any given week that year, filling 51% of the newshole studied from April 15-20. But by the following week, coverage had plunged to 7%, and the week after that, it virtually vanished.  Later that year, the rush hour collapse of the 1-35W Bridge in Minneapolis that killed 13 people was the top story (25%) the week of July 29 to August 3. One week later, it was a quarter of that. In April 2010, the West Virginia mine accident that killed 29 topped the list the week of April 5-11, accounting for 17% of the coverage studied. The following week, it had dropped to 3%.

One other disaster that bucked the “one-week wonder” trend was the devastating January 12, 2010 earthquake in Haiti estimated to have killed about a quarter of a million people. The disaster was among the top five stories for four straight weeks. But coverage of Haiti declined steadily each week, and by week six, it had fallen from a peak of 41% to only 3% of the newshole, ranking as the week’s No. 13 story.

Next: The breaking news never went away
← Prev Page
Page1You are reading page2Page3Page4Page5Page6Page7Page8Page9Page10Page11
Next Page →

100 Days of Gushing Oil – Media Analysis and Quiz
A different kind of disaster story
The breaking news never went away BP fared worse than the Obama White House If BP was the bad guy, no protagonist emerged The spill was a TV story, but different on cable vs. network In social media, less attention but lots of skepticism Using the web to try to tell a complex story The public was fascinated About this Report Topline