If the mainstream media gave the Gulf spill a large amount of attention over an unusually long   time span, the public, if anything, was even more fascinated.

According to surveys from the Pew Research Center for the People & the Press, public interest in the saga remained extremely high throughout the first 100 days of the disaster, equaling the levels of attention to some of the grimmest moments of the recent economic crisis and exceeding the interest at the most pivotal moments of the health care debate. 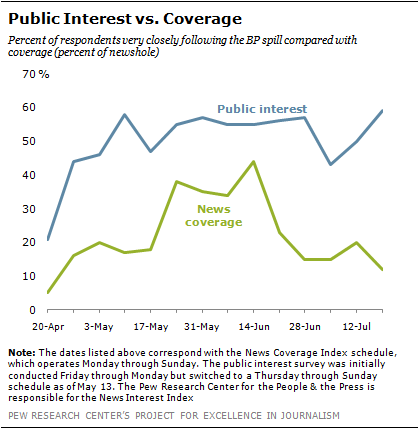 In the 14 full weeks of coverage included in this report, the oil spill was the No. 1 story in the mainstream media nine times, according to the PEJ’s News Coverage Index. When asked by the Pew Research Center which stories they were following “very closely” in that span, news consumers ranked the oil spill at the top of the list in 13 of those 14 weeks.

Public interest in the oil disaster, indeed, tended to deviate from media coverage in two ways. The public became keenly interested in the disaster even earlier than the media did, and the public remained fascinated at those levels for even longer than the press.

In the four weeks from April 26 to May 23, coverage of the spill was substantial, but not overwhelming, never exceeding 20% of the newshole. But in the same period, public interest was very high as the percentage of respondents who said they were very closely following events in the Gulf ranged between 44% and 58%.

Mainstream media attention to the story also began to level off in late June. But news consumers’ interest stayed very high. In the month between June 28 and July 25, for example, spill coverage ranged between 12% and 20% of the weekly newshole studied. But in that same time frame, the percentage of those paying very close attention remained at near peak levels—between 43% and 59%.

As much as the media focused heavily and in a sustained way, in other words, the public was even more interested.

Moreover, the intensity of public interest in the BP disaster compares favorably with some of the other mega-stories of the past few years.

When the extent of the Wall Street meltdown first became apparent in September 2008, public interest in the economy peaked, with 70% saying they were following the story very closely the week of September 26 to 29, 2008. But in February and March 2009, when the grim economy was once again driving the news, that number ranged between 48% and 56%, levels very comparable to the oil spill numbers.

And despite the polarizing passions stirred by the battle over health care in August 2009 when the town hall meetings were a major newsmaker, interest in the subject peaked with 49% following it very closely from August 21 to 24, 2009.  In late March, the time of the final legislative showdown that led to the passage of a bill, the percentage following the story very closely topped off at 51%.

But that doesn’t quite match America’s interest in the oil spill story; indeed, in eight different weeks in the saga, the percentage of respondents saying they were following the story very closely ranged between 55% and 59%.

On several occasions—in May, June and July—Pew Research Center asked whether news outlets were producing the right among of spill coverage, too little or too much. In each case, a majority of respondents said they were getting the right amount of news. But in each of the surveys, the percentage of people saying they were not getting enough coverage exceeded those who said they were getting too much—by 24% to 14% in May, 27% to 15% in July and a narrower 21%-19%  in June.

Next: About this Report
← Prev Page
Page1Page2Page3Page4Page5Page6Page7Page8You are reading page9Page10Page11
Next Page →

100 Days of Gushing Oil – Media Analysis and Quiz A different kind of disaster story The breaking news never went away BP fared worse than the Obama White House If BP was the bad guy, no protagonist emerged The spill was a TV story, but different on cable vs. network In social media, less attention but lots of skepticism Using the web to try to tell a complex story
The public was fascinated
About this Report Topline