Looking at the people who generated the most coverage over the course of the oil spill story, one thing is apparent. Protagonists, or heroes in the narrative, were few and far between—certainly none in BP and really, none in the government either. 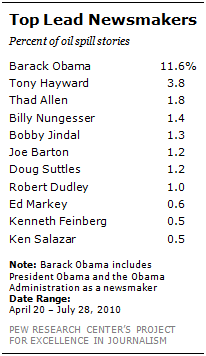 Even though the role of BP got more coverage overall than the role of the Obama White House, the leading oil spill newsmaker was still the President and his administration. Obama appeared as a lead newsmaker in about 12% of the oil spill coverage. To be a lead newsmaker, a figure must appear in at least 50% of a story and the president—by dint of his powers and bully pulpit—consistently tends to be the top headline generator in all news coverage. But that didn’t mean the president emerged as a favorable character in the oil spill narrative, as evaluations of his role tended to be very much mixed.

Several other government officials showed up in the coverage, but they too were not portrayed as protagonists. Thad Allen, the retired Coast Guard Admiral who evolved into the administration’s point person on the scene, was a lead newsmaker in around 2% of the stories, and he became more visible in the crisis in June and July. While Allen became a conduit for information about the cleanup and containment efforts, a close look at the coverage suggests he never cut the kind of authoritative, action-oriented figure that cigar-chomping General Russel Honore did when he was overseeing the Katrina cleanup.
Two days after a largely positive June 9 CNN profile of Allen that depicted him as a “measured” and “thoughtful” figure, the CBS evening newscast aired a more critical piece declaring that, “The Government’s top authorities on the spill—the Interior Department and Commander Thad Allen—repeatedly minimized the [oil spill estimates] put out by scientists.”

Interior Secretary Ken Salazar was at the bottom of the top newsmaker list, registering as a lead newsmaker in about .5% of all the stories. And he virtually faded from public view as the story went on. Kenneth Feinberg, tapped by the administration to process BP claims, also finished at .5%, though his role will likely grow now.

One other Democratic notable, Congressman Ed Markey, finished among the top newsmakers (.6% of the stories). As chairman of the Energy and Environment Subcommittee, which probed the disaster, Markey become a loud voice in the chorus of BP critics. But he never really emerged above the cacophony of Capitol Hill anger aimed at the oil company.

Then there was the BP contingent. The second-biggest newsmaker, (about 4% of the stories) was BP boss Tony Hayward, the subject of a good deal of unflattering coverage. Two other less known BP officials were also among the top 10 newsmakers. And while they may have fared better than Hayward, they certainly were not portrayed favorably. Doug Suttles, who functioned as a public spokesman for the company, registered in about 1% of the stories. And Robert Dudley, who became the first American to head BP when it was announced in late July that he would replace Hayward, finished at 1%.

If there were positive figures to emerge in the coverage of this disaster, they were two Louisiana officials. One was Republican Governor Bobby Jindal, a lead newsmaker in about 1% of all the stories.

Jindal was largely portrayed in the narrative as a staunch critic of the White House, which he believed was moving too slowly on the leak, as well as a man of action trying to save his state from crippling environmental damage. Some of the coverage noted that Jindal, a philosophical foe of big government, was walking a political tightrope in pushing for more government intervention.

But a June 30 NPR report discussing Jindal’s popularity among his constituents quoted a local political columnist as saying, “Even if he sometimes seems like he’s beating his head against the wall or trying to hold back the sea [Louisiana residents] give him credit for being out there and persisting and raising hell at times.”

But more so than Jindal, it was Plaquemines Parish president and local activist Billy Nungesser, who emerged as the protagonist, as well as a ubiquitous figure in the media. Nungesser, who like Jindal was a lead newsmaker in about 1% of all the spill stories, was featured, for example, in a May 31 New York Times story headlined, “Louisianan becomes Face of Anger on Spill.”

“Within hours of the April 20 explosion aboard the Deepwater Horizon oil rig, Mr. Nungesser, 51, became a go-to guy for the news media,” the story noted. “In the ensuing weeks, he has turned into the angry everyman of the oil spill, whether delivering a broadside against the government and BP’s response efforts on CNN or standing in the gymnasium of Boothville- Venice Elementary School…before an anxious crowd of shrimpers and fisherman.”

Nungesser’s pox-on-all-their-houses persona seemed to fit with the public mood as the oil kept gushing. And by the beginning of July, he had to tamp down speculation that he would run for lieutenant governor of Louisiana.

Next: The spill was a TV story, but different on cable vs. network
← Prev Page
Page1Page2Page3Page4You are reading page5Page6Page7Page8Page9Page10Page11
Next Page →

100 Days of Gushing Oil – Media Analysis and Quiz A different kind of disaster story The breaking news never went away BP fared worse than the Obama White House
If BP was the bad guy, no protagonist emerged
The spill was a TV story, but different on cable vs. network In social media, less attention but lots of skepticism Using the web to try to tell a complex story The public was fascinated About this Report Topline