The public followed news about the missing Malaysia Airlines plane more closely than any other story last week. While the story has attracted extensive news coverage, especially from cable TV outlets, most Americans do not feel there has been too much coverage of the missing jetliner. 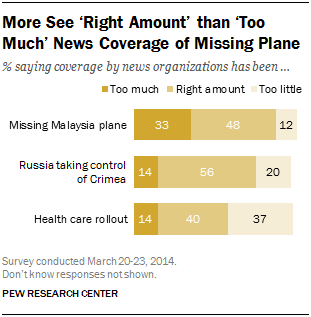 The latest national survey by the Pew Research Center, conducted March 20-23 among 1,002 adults, finds that 44% followed news about the missing Malaysian jetliner most closely, far surpassing interest in any other story. Russia’s annexation of Crimea was a distant second, with 15% following that news most closely.

However, more people think that the missing jetliner has received too much news coverage than say that about two other stories last week – Russia’s actions in Crimea and the rollout of the 2010 health care law; just 14% each view those stories as over-covered. For the most part, the public sees the amount of coverage of Russia and Crimea as appropriate (56% right amount). But fewer (40%) say that news about the rollout of the health care law has gotten the right amount of coverage. Nearly four-in-ten (37%) say implementation of the health care law has been under-covered by news organizations – the highest percentage of the three stories asked about. 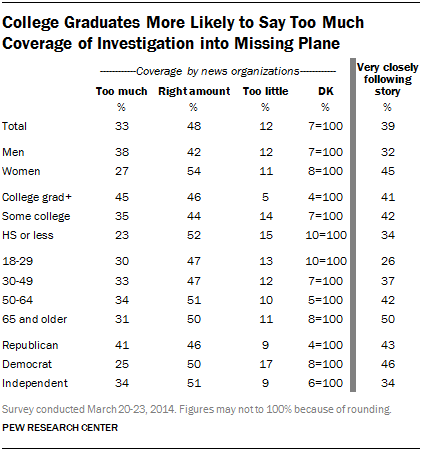 About four-in-ten Republicans (41%) say there has been too much coverage of the missing jetliner. That compares with 34% of independents and just 25% of Democrats.

Malaysian Airline Flight 370 went missing on March 8. Since then, there has been intensive speculation about what might have happened to the plane. Malaysia’s prime minister, Najib Razak, announced March 24 that the flight went down in the Indian Ocean. 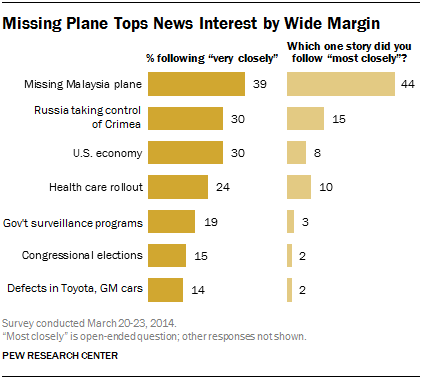 The survey, conducted March 20-23, found that while nearly four-in-ten (39%) followed news about the investigation into the missing jetliner very closely, 30% each tracked news about Russia taking control of Crimea and the U.S. economy very closely.

But when people are asked which story they followed most closely, interest in the probe into the Malaysian plane’s fate far exceeds interest in the week’s other news stories. 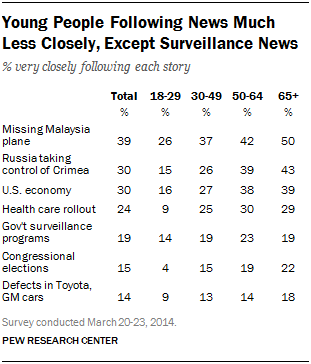 As is typically the case, young people express less interest in most of this week’s news stories than do older adults. Only about a quarter of those under 30 (26%) tracked news about the missing jetliner very closely, by far the lowest share of any age group.