The survey’s overall findings show that adult learning – for personal or professional purposes – touches a wide range of Americans. However, significant differences emerge along adults’ levels of educational attainment and income. Those on the lower end of those scales are less likely to engage in professional or personal learning and have less positive views of their impacts. Additionally, the internet plays less of a role in how they go about learning than it does for those with higher levels of income and education.

The sizes of the key segments being compared are worth underscoring. Some 40% of adults have high school degrees or less in the United States, while 28% have college degrees or more. One-third (32%) of adults report living in households with annual incomes of $30,000 or less, compared with 27% who say they live in homes where their annual incomes exceed $75,000.

The nearby charts show how the results break out for all responses for personal learning focusing on those on the lower end of educational and income spectrums; that is, comparing those with high school degrees or less to those with college degrees and those in households whose incomes are below $30,000 annually to those in households with annual incomes above $75,000. 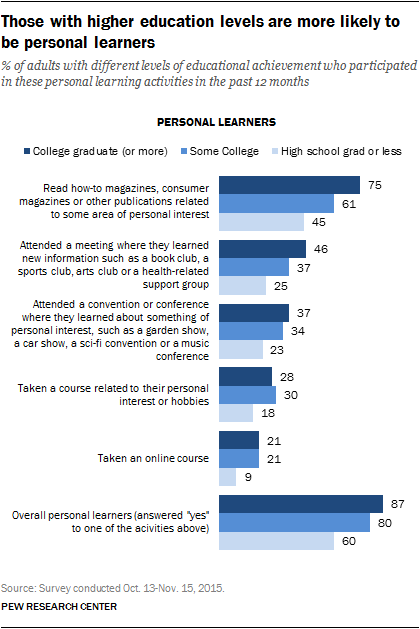 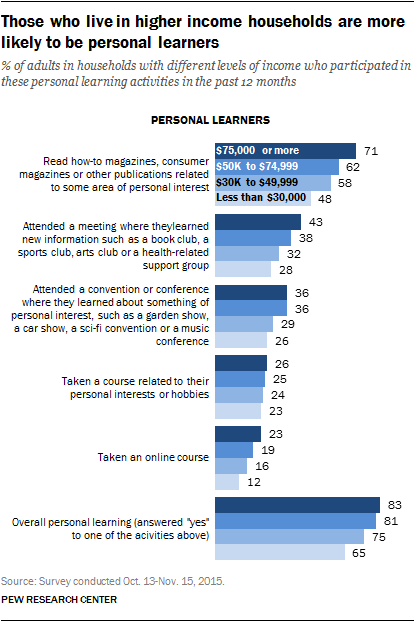 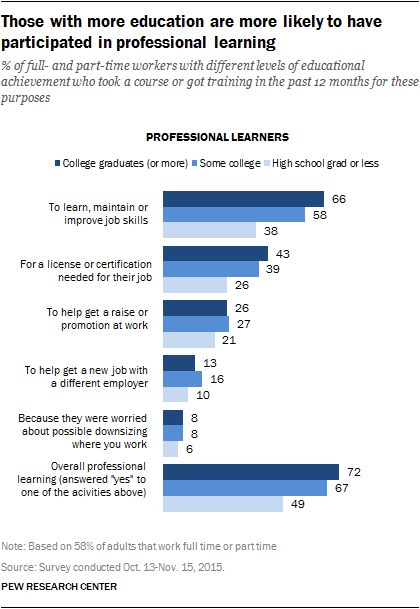 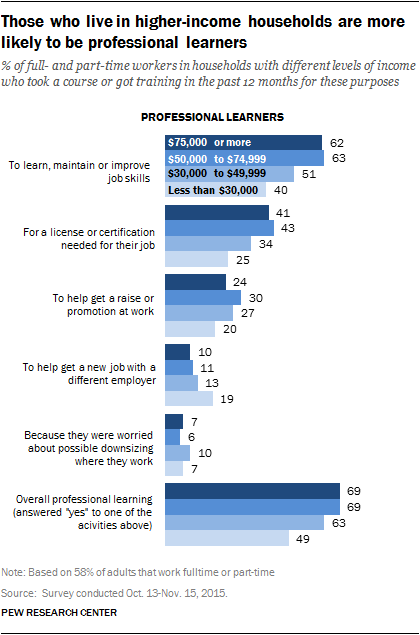 Next: 5. The internet plays less of a role in lifelong learning for those with lower levels of education and income
← Prev Page
Page1Page2Page3Page4You are reading page5Page6Page7Page8Page9Page10Page11
Next Page →

Lifelong Learning and Technology 1. The joy – and urgency – of learning 2. Three-quarters of adults have done a personal learning activity in the past year 3. Almost two-thirds of employed adults pursue job-related learning
4. Those on the lower end of the socio-economic ladder are less likely to take advantage of lifelong learning opportunities
5. The internet plays less of a role in lifelong learning for those with lower levels of education and income 6. Adults with tech-access tools are more likely to be lifelong learners and rely on the internet to pursue knowledge 7. People’s attitudes about learning, the classroom and personal growth shape adult learning activities 8. In addition to socio-economic class, there are differences in adult learning with respect to race and ethnicity Acknowledgments Methodology