Most Americans feel they are lifelong learners, whether that means gathering knowledge for “do it yourself” projects, reading up on a personal interest or improving their job skills. For the most part, these learning activities occur in traditional places – at home, work, conferences or community institutions such as government agencies or libraries. The internet is also an important tool for many adults in the process of lifelong learning. 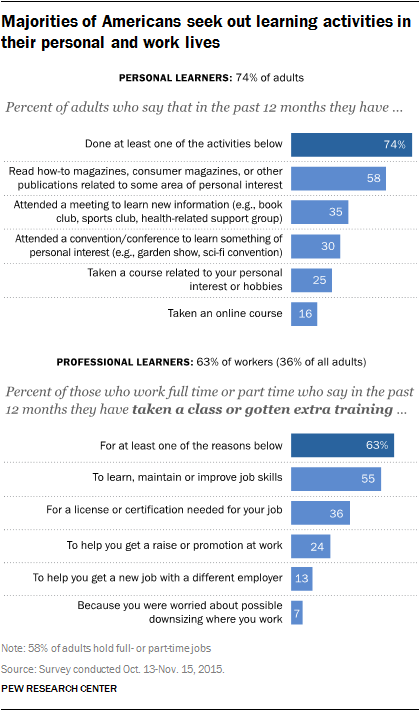 A new Pew Research Center survey shows the extent to which America is a nation of ongoing learners:

These learning activities take place in a variety of locations. The internet is often linked to a variety of learning pursuits. However, it is still the case that more learners pursue knowledge in physical settings than choose to seek it online.

People cite several reasons for their interest in additional learning

Those who pursued learning for personal or professional reasons in the past 12 months say there are a number of reasons they took the plunge. Personal learners say they sought to strengthen their knowledge and skills for a mixture of individual and altruistic reasons:

For workers who took a course or got extra training in the past 12 months, their reasons for wanting doing so ranged from career growth to job insecurity:

Asked about the impact of these learning activities, many personal and professional learners cite a variety of benefits. For the 74% of the population who pursued personal learning in the past 12 months, the rewards often tie to psychological and social benefits:

When it comes to the 63% of workers who are professional learners: 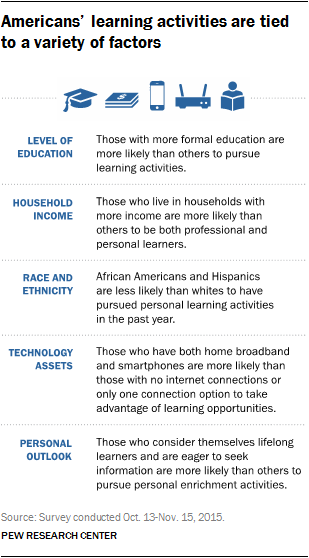 There are broad patterns associated with personal and professional learning related to socio-economic class, people’s access to technology, the kinds of jobs they have, their learning outlooks, and their racial and ethnic backgrounds. As a rule, those adults with more education, household incomes and internet-connecting technologies are more likely to be participants in today’s educational ecosystem and to use information technology to navigate the world.

These findings offer a cautionary note to digital technology enthusiasts who believe that the internet and other tools will automatically democratize education and access to knowledge. The survey clearly shows that information technology plays a role for many as they learn things that are personally or professionally helpful. Still, those who already have high levels of education and easy access to technology are the most likely to take advantage of the internet. For significant minorities of Americans with less education and lower incomes, the internet is more on the periphery of their learning activities. Fewer of the people in those groups are professional or personal learners, and fewer of them use the internet for these purposes. Overall, the internet does not seem to exert as strong a pull toward adult learning among those who are poorer or less educated as it does for those in other groups.

Educational levels: The survey reveals significant differences in the incidence of learning based on adults’ levels of education. For personal learning, 87% of those with college degrees or more (throughout this report adults with college degrees or more refers to anyone who has at least a bachelor’s degree) have done such an activity in the past year, compared with 60% for among those with high school degrees or less. For professional learning, about three quarters (72%) of employed adults with at least college degrees have engaged in some sort of job-related training in the past year, while half (49%) of employed adults with high school degrees or less have done this.

Technology assets are strongly tied to the likelihood that people engage in personal learning online. Those with multiple access options (that is, a smartphone and home broadband connection) are much more likely to use the internet for most or all of their personal learning – by a 37% to 21% margin – relative to people with one or no access options.

Personal outlook: People’s attitudes toward new information are also tied to the likelihood that people are personal. Those who see themselves as lifelong learners are more likely than others to be personal learners by a 77% to 40% margin. Additionally, those who say they are open to looking for new opportunities to grow are more likely than others to engage in personal learning activities by a 77% to 51% margin.

Race and ethnicity: African Americans and Hispanics are less likely to say they have pursued personal learning activities in the past year by margins that differ significantly from white adults. The differences for professional learning are less pronounced for African Americans, though still substantial for Hispanics. Some 79% of white adults are personal learners, compared with 64% of blacks and 60% of Hispanics. Additionally, 65% of white workers are professional learners, compared with 59% of black workers and 52% of Hispanic workers.

Type of job: Finally, the type of job a person has shapes the likelihood of having had professional training. For instance, four-fifths (83%) of those who work for the government have had some job training in the past year, while half (50%) who work for small businesses have had such training.

The educational ecosystem is expanding dramatically. Still, there is not widespread public awareness of some of the key resources that are becoming available. Noteworthy majorities of Americans say they are “not too” or “not at all” aware of these things:

Next: 1. The joy – and urgency – of learning
← Prev Page
You are reading page1Page2Page3Page4Page5Page6Page7Page8Page9Page10
Next Page →