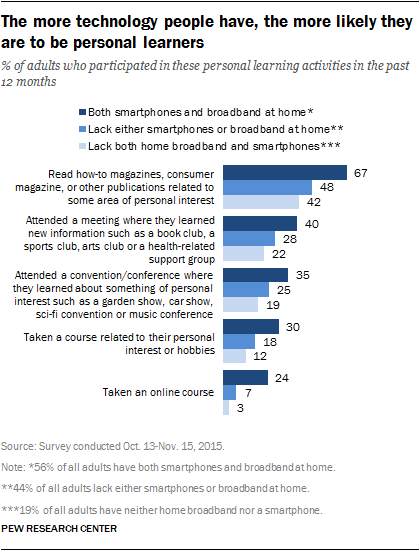 The internet’s role in facilitating people’s choice to engage in personal or professional learning hinges to some degree on the tech assets they have. As Pew Research Center has reported, two-thirds of Americans have a smartphone (68%) and another two-thirds have a home broadband connection (67%). One measure of persistent connectivity is whether people have both a smartphone and a home broadband connection. In the October-November 2015 survey, 56% of adults report having both. This turns out to be a good metric for analyzing the association between tech assets and learning among adults. 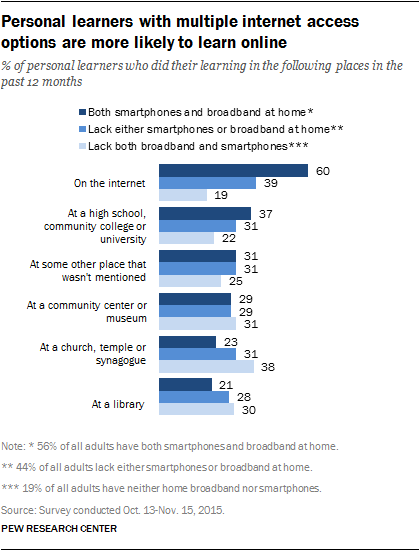 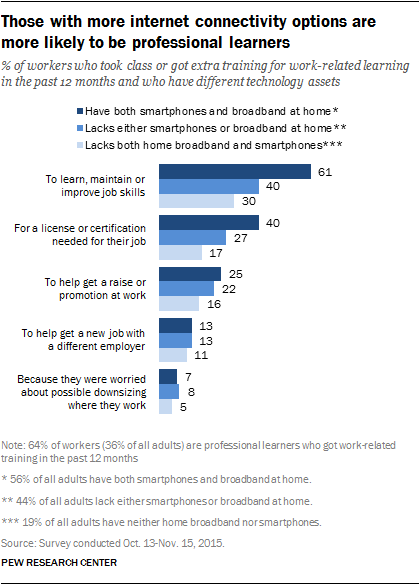 The same dynamic is on display for professional learning. Among employed adults: 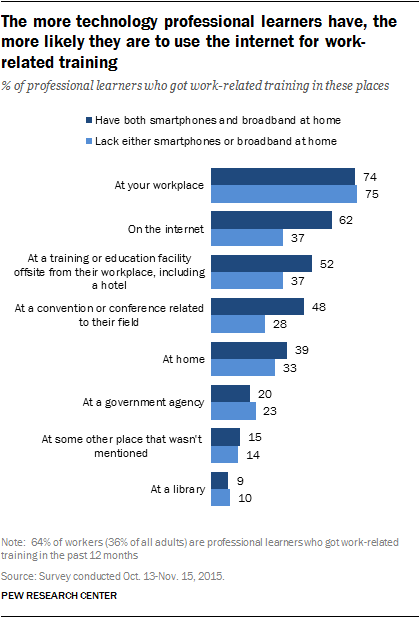 The places where professional learners got their extra training also are associated with the kinds of technology tools people have. More tech access means greater reliance on the internet for training, as well as training offsite from the workplace or at conventions. There are too few cases to present findings on those with low levels of tech access (i.e., they lack smartphones or home broadband connections), but a general pattern shows that professional learners who lack home broadband and smartphones are a bit more reliant on community institutions, such as libraries, for training and less likely to attend conventions or use the internet for professional training.

And, much like the case for personal learning, tech access shapes how heavily adults use the internet for professional learning. More than one-third of professional learners with lots of tech assets say they did all or most of their learning online, while about one-fifth with fewer options for online access say this.

Lifelong Learning and Technology 1. The joy – and urgency – of learning 2. Three-quarters of adults have done a personal learning activity in the past year 3. Almost two-thirds of employed adults pursue job-related learning 4. Those on the lower end of the socio-economic ladder are less likely to take advantage of lifelong learning opportunities 5. The internet plays less of a role in lifelong learning for those with lower levels of education and income
6. Adults with tech-access tools are more likely to be lifelong learners and rely on the internet to pursue knowledge
7. People’s attitudes about learning, the classroom and personal growth shape adult learning activities 8. In addition to socio-economic class, there are differences in adult learning with respect to race and ethnicity Acknowledgments Methodology